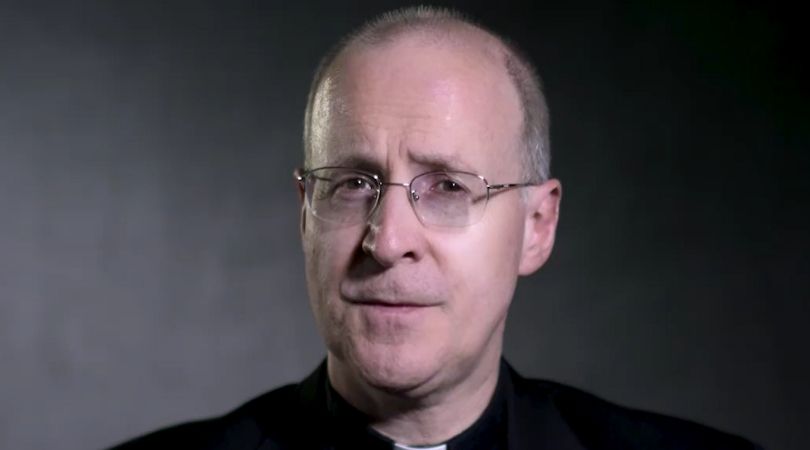 WASHINGTON (ChurchMilitant.com) - Pro-LGBTQ Jesuit priest James Martin warned on video that his supporters "ignore at their peril" Church Militant due to the nature of its coverage of the Church and politics.

He also proclaimed that pro-life Catholic bishops and priests contributed to an environment that led to violence on Capitol Hill last week, which he characterized as "incitement to rebellion."

In a YouTube video distributed by America Media, Fr. Martin reiterated charges he made in an op-ed titled "How Catholic Leaders Helped Give Rise to Violence at the U.S. Capitol," which appeared in America Magazine, where he is editor-at-large.

In the Jesuit-run publication this week, Martin cited homilies by several priests and bishops as examples of clerics who allegedly communicated "the message that the election was an almost apocalyptic battle between good and evil."

For example, he quoted Fr. James Altman of Wisconsin saying before the Nov. 3 election, "Their party platform absolutely is against everything the Catholic Church teaches," and, "So just quit pretending that you're Catholic and vote Democrat. Repent of your support of that party and its platform, or face the fires of Hell."

Martin also cited Bp. Joseph Strickland of Tyler, Texas, who tweeted his support of Fr. Altman. Bishop Strickland wrote, "I endorse Fr. Altman's statement in this video. My shame is that it has taken me so long."

Despite clear restrictions on political endorsements and the Church's longstanding teaching on conscience, the statements from Frs. Altman and Meeks and Bp. Strickland were part of a pattern of similar commentary from members of the clergy. Most did not make the news, as they were heard in homilies and read in parish bulletins. But they were no less effective in communicating the message.

Martin cited homilies by several priests and bishops as examples of clerics who allegedly communicated 'the message that the election was an almost apocalyptic battle between good and evil.'

For Martin, the statements by the fellow clerics do not "adequately reflect Church teaching, which leaves the final choice on voting to an individual's formed conscience, recognizing that there are many important issues that a voter might have to consider." He quoted a line in "Faithful Citizenship," a voter guide published by the United States Conference of Catholic Bishops, which says, "There may be times when a Catholic who rejects a candidate's unacceptable position even on policies promoting an intrinsically evil act may reasonably decide to vote for that candidate for other morally grave reasons."

Martin failed to quote the sentence in the bishops' document following the above, which states, "Voting in this way would be permissible only for truly grave moral reasons, not to advance narrow interests or partisan preferences or to ignore a fundamental moral evil."

Martin wrote that a "morally grave reason" for a Catholic to vote for a pro-abortion candidate "would be if the pro-life candidate were unhinged, unfit to govern or somehow posed a threat to the republic — as President Trump confirmed he was by inciting a mob that attacked the U.S. Capitol, causing a stunningly violent riot that left five people dead."

Moreover, Martin wrote that there are "traditional restrictions" for clerics seeking to endorse political candidates, citing "Faithful Citizenship" and a 1994 Vatican directive that warned against partisanship.

In the video billed as a "conversation" with Martin, the priest was interviewed by Sebastian Gomes, executive editor of America Media. Gomes started the segment by saying:

The country and the Church continue to process the violent insurrection at the U.S. Capitol by Trump supporters on Jan. 6 — including the very prominent symbols and displays of white Christian nationalism. And within the Catholic Church people are rightly asking to what degree are some Catholic leaders responsible and complicit in this act.

In the video, Martin repeated much of what he wrote in his op-ed. Martin said:

When Gomes asked Martin whether there is a "deeper problem" afoot in American politics, the priest said that there is a "connection between the pro-Trump forces and the anti-Francis forces." He said, "These are the same people." While saying that he does not wish to "demonize" Cdl. Burke, Abp. Viganò and others with whom he disagrees, Martin identified them as a "complicated nexus" in concert with "groups like Church Militant, LifeSiteNews, Catholic News Agency, that work together, as well as Breitbart News and people who work there."

Martin identified himself as 'pro-life' but said that 'abortion is not the only issue.'

Martin went on: "Thomas Williams is a big commentator, Raymond Arroyo on EWTN — what am I trying to do, not trying to demonize these people, but to say that this is a sort of community that supports one another, that retweet one another and, taken together, are a very powerful voice."

Martin said regarding Church Militant and related websites that:

We ignore these groups and news agencies at our peril. A lot of priests and bishops say "Well, we can just ignore that, they're always anti-Francis"; you know, they have an effect, and we have to take that seriously in the Church and to see what kind of information they are giving out, what kind of false information they are giving out, how they are talking about the Church, and especially what they are telling about Catholic theology. Their presentation on how to vote was really off base.

Interviewer Gomes asked what would be wrong about a Catholic voting for Joseph Biden and Kamala Harris. In reply, Martin identified himself as "pro-life" but said that "abortion is not the only issue. Abortion is an intrinsic evil, but it is far from the only intrinsic evil, and the bishops said it is the pre-eminent issue, but it is not the only issue." He went on, "We are called to use our consciences," saying that the American bishops' "Faithful Citizenship" says there:

may be times when a voter — this may seem surprising to people because this is not what people are hearing, but this is Catholic teaching — there may be times when a Catholic voter can vote for a candidate that supports an intrinsic evil, like abortion, because of other "morally grave reasons."

"What is a 'morally grave reason?'" Martin asked. Answering himself, he said:

Well, for example, that the President of the United States or that candidate might incite an insurrection against the U.S. Capitol. So a Catholic who makes the moral calculus and says, "I believe that Donald Trump is dangerous," is within Catholic teaching allowed and permitted to use his or her conscience to vote for someone else.

In his article, Martin claimed "nuanced views" on the "primacy of formed conscience and the degrees of 'moral cooperation' were lost" because of the actions of many bishops and priests.

He wrote, "The lack of any real action against priests and bishops promoting false dichotomies meant that people assumed simplistic bromides were 'Church teaching,' and the ability of so many apocalyptic voices to command a public stage through a coordinated effort by the far-right media gave these views a bigger megaphone."

Martin said that Catholic leaders "should be corrected" for "the mistake for which the Church now needs to repent."

He wrote that many are guilty of pretending that "real questions of good and evil could be simplified to the point where violent responses, even acts of domestic terrorism, become thinkable and then are carried out." 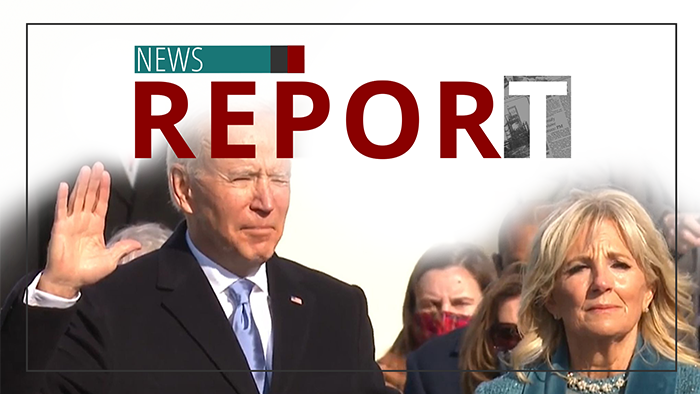 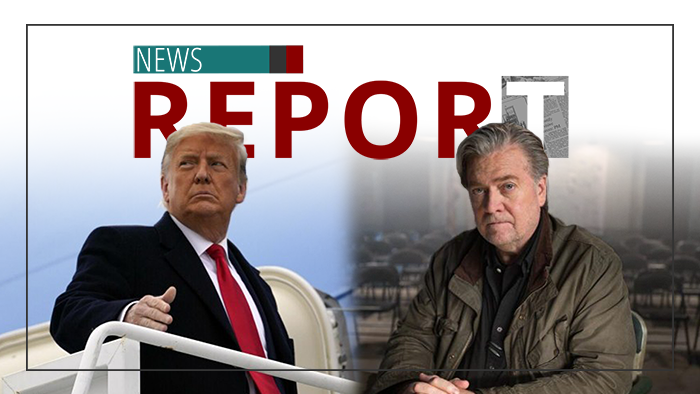 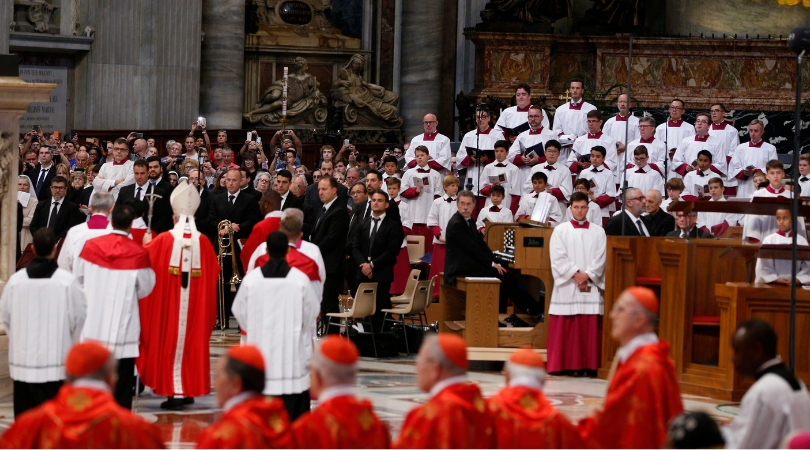 Priestly Obedience: What It Is and What It Isn’t
By Church Militant   •   0