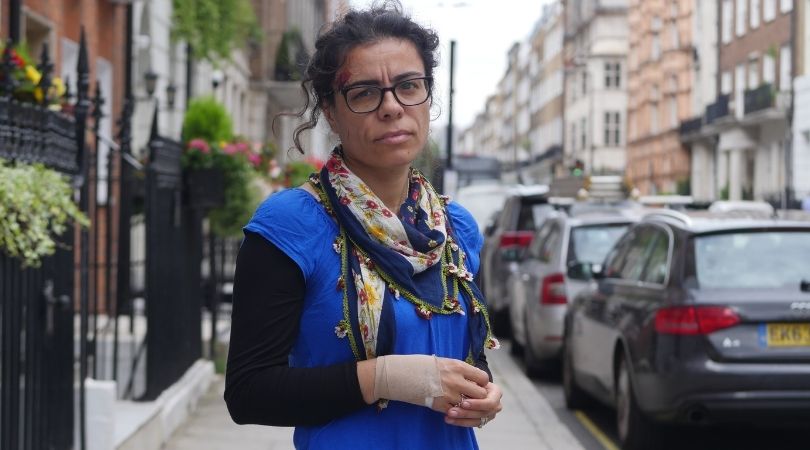 The fearless female evangelist returned to the scene wearing a Charlie Hebdo T-shirt to preach the gospel — a week after the attempt on her life in London's Hyde Park.

Hatun Tash, who fled Turkey and sought refuge in Britain after she was persecuted for converting to Christianity, told Church Militant she faced escalating threats after she began disproving the Islamic doctrine of an infallible, single, original version of the Koran.

The daughter of a well-known imam in Istanbul, who detected multiple contradictory Arabic versions of the Koran while teaching in Morocco, was stabbed multiple times at 3:30 p.m. last Sunday in the presence of police while she was holding a debate with Muslims.

A hooded and masked man wearing black lashed out at the 39-year-old with a long knife, repeating the name of Allah and slashing her in the face and upper body while aiming for her throat in accordance with the Koranic injunction to "smite at their necks."

Speaking to Church Militant, Andrea Williams, chief executive of the Christian Legal Centre, said, "This was an attack at the most famous place in the world for free speech by a man in all probability motivated by Islam. The fact nobody is allowed to say this or criticise Islam says it all about where we are at."

My attacker was not even afraid of the police, as he did it right in front of them.

Hatun has been slapped, punched and knocked to the ground by Islamic men at Speakers' Corner since June 2020. The police have failed to protect her and instead have taken the easy option of arresting her and escorting her from the park, which has encouraged those who wish to harm and silence her.

"Hatun is fearless. She will return to Speakers' Corner. Such is her passion for evangelism," added Williams, whose organization has been supporting Tash.

In mobile phone footage captured by witnesses, Tash is seen collapsing as a police car appears on the scene with its siren blaring, but the police fail to apprehend the fleeing assailant while members of the public are seen trying to stop him.

"My attacker was not even afraid of the police, as he did it right in front of them," Tash said. The attacker's "intention was clearly to kill me," but the "police do not want to arrest a Muslim for fear of being called 'Islamophobic,'" she continued.

Footage of the knife attack on Hatun Tash

Waiting for the ambulance, a profusely bleeding Tash called her audience to repentance:

Dear Muslim people, do you know how much it hurts when you run away from the Lord Jesus Christ? It's not about the blood on my hand. ... It is unacceptable you are running away from Lord Jesus Christ. It is unacceptable, 21st century you haven't repented. And what you do is chop people's hands off. God doesn't need me. God can do better job without me.

In a conversation with Church Militant, the passionate Christian said she began to expose the myth of a single Arabic version of the Koran in 2016, but that "the Muslims were denying this even though I was bringing multiple versions of the Koran to Speakers' Corner." Muslims claim the Koran has never changed over the past 1,400 years.

Dear Muslim people, do you know how much it hurts when you run away from the Lord Jesus Christ?

"But last July, when Muslim scholar Sheikh Yasir Qadhi explained that there are 'holes in the narrative' [of a single original Koran], I started pushing this more and more using a visual aid of a Koran with holes punched in it, and ... the attacks got increased," she said.

Tash, who has a huge presence on YouTube, said she got her first threat when she called Muhammad a "false prophet" and began to reiterate the dangers of Islamic extremists extinguishing free speech in the West.

Church Militant spoke to eyewitnesses at the scene of the attack, including Steve — who provided only his first name and identified himself as an "atheist" who has been "a regular attendee at Speakers' Corner for more than 20 years."

Steve said the media were spinning the attempted murder by subtly transferring the blame to Tash for provoking her attacker by wearing a Charlie Hebdo T-shirt, remarking: "I have been more appalled by both the response of the police and of the media coverage of the attack."

"There is a huge backstory on this case, in terms of what Hatun has been preaching over the last three years. She has been at the center of exposing holes in the narrative of the Islamic faith, including the existence of over 26 versions of the Koran," Steve observed.

"She's been attacked on many previous occasions, both in and outside Speakers' Corner, including being knocked unconscious at Speakers' Corner in October 2020," he stressed.

Steve noted that "two police officers were sitting in a police car not more than 20 meters away from the attack against her life on Sunday and failed miserably to either prevent the attack or apprehend the attacker," but the media was failing to cover both these issues.

"No one is allowed to say the attacker was a Muslim, even though even the Muslims are saying it," a media source told Church Militant. "Police have been discouraging broadcast media from covering the story and suggesting the attack was religiously motivated."

Hatun is the most effective Christian evangelist to Muslims that I know. Many Muslims have converted through her ministry.

"Police have still not caught the attacker despite it happening in front of the police in one of the most [surveilled] areas of London. Tash has also been sent images of the attacker previously debating with her at Speakers' Corner," he said. "They appear to know exactly who the attacker is."

Church Militant obtained a letter from Detective Inspector Akshay Chibber to a "regular visitor" to Speakers' Corner who raised concerns about the historic free speech venue dominated by "Islamic hotheads" and a "possible breeding ground for terrorism."

The complainant writes of witnessing "people of North African and Middle Eastern origin [also] physically assaulting other members of the Islamic religion."

Chibber responded by noting that the complainant's email contained "a number of referrals interpretable as prejudicial and intolerant, based on a person's religious or other origin."

"Any further correspondence that alludes to such language will not be responded to," the staff officer to London's police commissioner Cressida Dick, wrote.

Shockingly, police arrested Tash, detained her for 23 hours and charged her with "breaching the peace" after a Muslim mob physically assaulted her at Speakers' Corner in May.

Earlier, in December 2020, Tash was arrested, searched and detained for 21 hours under coronavirus regulations after she objected to police depriving speakers of the right to free speech at Speakers' Corner.

Heritage Party leader and former member of the London Assembly David Kurten said the police failed to protect Tash even though he wrote to deputy mayor for policing Sophie Linden about Tash's safety in September 2020.

"Hatun is the most effective Christian evangelist to Muslims that I know. Many Muslims have converted through her ministry," Islamic expert Tim Dieppe wrote in a commendation of Tash's ministry.

Hatun is fearless. She will return to Speakers' Corner. Such is her passion for evangelism.

"I have seen her in action myself, and she is incredibly well-informed on Islamic apologetics and an expert in engaging in the cut-and-thrust debate that occurs there," Dr. Dieppe observed.

"Undoubtedly, her effectiveness is partly due to her distinctively provocative style," but "let's not forget that Jesus was also very provocative at times and ended up being killed because of the anger he stirred up," Dieppe commented.