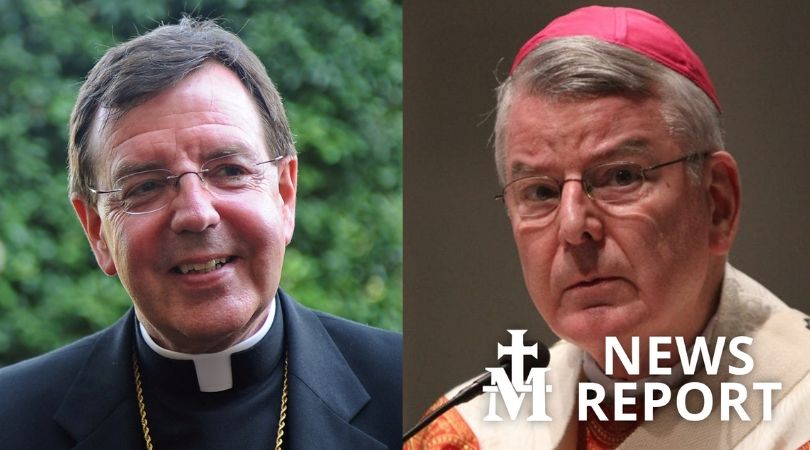 An archbishop who had to step down in disgrace for sex abuse cover-up is being welcomed with open arms in the archdiocese of Detroit and by his very close friend Abp. Allen Vigneron.

Reports from the time say Nienstedt overlooked the complaints because he was in a relationship with Wehmeyer.

The case went on to earn the archdiocese of Saint Paul-Minneapolis the distinction of being the only U.S. diocese to be criminally prosecuted for sex abuse cover-up.

Vigneron and Nienstedt were both stationed at Sacred Heart Major Seminary back in the 1990s, a time when multiple witnesses, including religious and seminarians, say Nienstedt led a promiscuous gay lifestyle.

Despite their long-standing friendship, even Vigneron was forced to publicly deal with the Nienstedt scandal when news broke that he was heading back to Detroit: "This summer, Archbishop Nienstedt announced his intention to move back to southeast Michigan to live in a house he owns. At that time, Archbishop Vigneron asked Archbishop Nienstedt — and he agreed — to abstain from public ministry in the Archdiocese of Detroit. That agreement remains in effect."

Nienstedt was essentially driven out of one parish in western Michigan once parishioners became aware he was there.

The archdiocese of Detroit has been an epicenter of the homosexual infiltration of the clergy dating all the way back to gay-friendly Cdl. John Dearden.

Additionally, he is forbidden to exercise public ministry in two different dioceses.

Despite all this history as well as his own statement, Vigneron invited Nienstedt to concelebrate an important public Mass at Detroit's Sacred Heart Major Seminary in June 2018, raising not a few eyebrows in the archdiocese as it appeared that Vigneron was saying one thing but doing another.

Church Militant asked the Detroit archdiocese why Vigneron invited Nienstedt to concelebrate Mass in direct contradiction to his public statement but, predictably, never received a response.

Moreover, Facebook photos from this summer show high-ranking Detroit clergy and long-time friends of Nienstedt flaunting their friendship, something many are also finding disturbing.

The archdiocese of Detroit has been an epicenter of the homosexual infiltration of the clergy dating all the way back to gay-friendly Cdl. John Dearden beginning in the 1960s.

Beginning with him and continuing to the present day, the archdiocese of Detroit has earned a notorious reputation for welcoming, protecting and advancing homosexual clergy for decades.

Nienstedt appears not only to have been in the thick of that but took much of that atmosphere with him when he was assigned as archbishop of St. Paul-Minneapolis.

The Ramsey County attorney's office released nearly a thousand pages of witness testimony, police reports, affidavits and files revealing Nienstedt not only protected convicted pederast Curtis Wehmeyer but was reported to be a sexual predator himself stretching back decades to his time as rector of Sacred Heart Major Seminary where former seminarians claim he sexually propositioned them and then punished them if they rejected his advances.

A confidential memo from the priest appointed by Nienstedt himself to be the liaison between the archdiocese and the firm investigating the archbishop reveals a troubling picture:

Nienstedt has consistently denied all this, claiming the allegations, coming from at least two dozen witnesses across three dioceses, are part of a conspiracy by liberals opposed to the strong stance he took against same-sex marriage.

However, critics point to the fact that at least half a dozen of those witnesses are conservative themselves and hold the same doctrinal stance as Nienstedt with regard to same-sex marriage.

The problem in all of this for Abp. Vigneron is it undermines everything he publicly claims about wanting to create a "new DNA" in the archdiocese — an archdiocese whose numbers have cratered since he was appointed more than 10 years ago.

For an archbishop — already suffering credibility issues on the whole homosexuality question owing to his refusal to end the world's longest continual weekly gay Mass right under his nose — to now permit his old friend, draped in homosexual scandal, to roam about the archdiocese instead of keeping a very low profile only serves to continue to undermine the faithful's confidence that any of the bishops are serious about these scandals.

And all of this is coming out just as Abp. Vigneron launches yet another almost $200 million fundraising campaign.

Faithful are asking: When is it all going to stop?