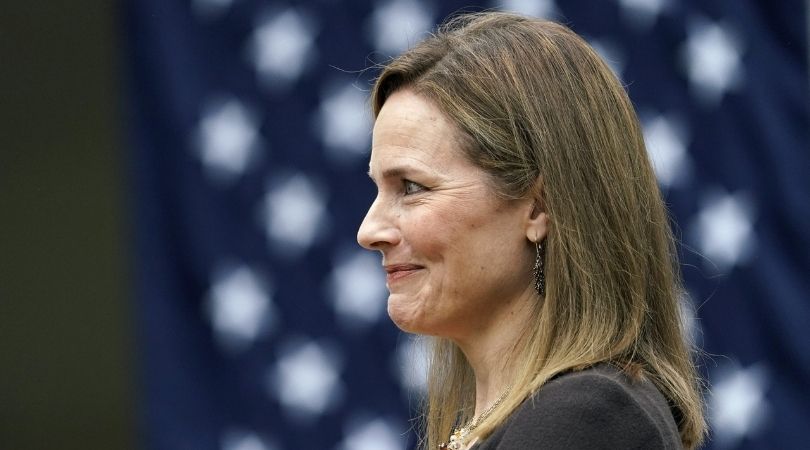 In a 52–48 vote, every Republican senator except Sen. Susan Collins of Maine voted to confirm the Catholic mother of seven to the High Court bench. No Democrats voted for Barrett.

Senator Lisa Murkowski of Alaska, who had originally pledged not to vote for Barrett, reversed course over the weekend and voted in her favor.

"While I oppose the process that has led us to this point," said Murkowski on the Senate floor Saturday, "I do not hold it against her as an individual who has navigated the gauntlet with grace, skill and humility."

Majority Leader Mitch McConnell had kept the Senate in session over the weekend to allow for debate. On Sunday evening the committee voted to shorten debate so as to expedite the confirmation process.

With Barrett now confirmed, there will be five practicing Catholics on the High Court.

There will also be a solid conservative majority, even without a vote from Roberts, who has been unpredictable. While voting against gay marriage in United States v. Windsor (2013) and Obergefell v. Hodges (2015), he broke rank with conservatives on the Court and voted to preserve Obamacare in NFIB v. Sebelius (2012). He also voted with the liberal bloc in June Medical Services v. Russo earlier this year, siding with Planned Parenthood and striking down a Louisiana pro-life law that would have required abortionists to have admitting privileges to local hospitals.

While Barrett has refused to state her legal opinion on Roe v. Wade, in spite of Democrats' repeated attempts to get her to do so, she has publicly supported pro-life initiatives, including adding her name to a 2006 pro-life ad placed in the South Bend Tribune by St. Joseph County Right to Life, which urged, "It's time to put an end to the barbaric legacy of Roe v. Wade and restore laws that protect the lives of unborn children."

It was a point of contention with Senate Democrats during her confirmation hearings. Connecticut Democrat Richard Blumenthal, for example, asked about the ad: "What does it mean for the unborn to be protected in law?"

"I think that statement is an affirmation of life," said Barrett. "It points out that we express our love and support for the mothers who bear them. Again, it was a statement validing the position of the Catholic university at which I worked and support for life, and to support women in crisis pregnancies, to support babies."

"It's really no more than the expression of a pro-life view," she added.

Several senators also tried to elicit a response from the devout Catholic about her beliefs on contraception by bringing up Griswold v. Connecticut, the 1965 case that legalized birth control. Their attempts earned them a rebuke from Missouri Sen. Josh Hawley.

"Are you aware of any legal movement out there to challenge the constitutionality of Griswold v. Connecticut?" he asked Bar rett.


"Here's my point. I was seven years old when Judge Robert Bork came before this body," Hawley said. "What we saw, I think the legacy of the Bork hearings contine to reverberate. His name has become a verb — the borking of nominees. I think what we've seen today is the attempted borking of Judge Amy Barrett."

While conservatives had braced for a vicious Supreme Court confirmation battle going in, the week of hearings was less contentious than expected. Senator Dianne Feinstein, D-Calif., who came under fire in 2017 for her anti-Catholic "dogma lives loudly in you" remark to Barrett, was careful this time to avoid the subject of the nominee's faith, as was Sen. Dick Durbin, D-Ill., also blasted in 2017 for asking the judge what "an orthodox Catholic" is.

Barrett will be sworn in by Justice Clarence Thomas Monday night in a small ceremony at the White House.