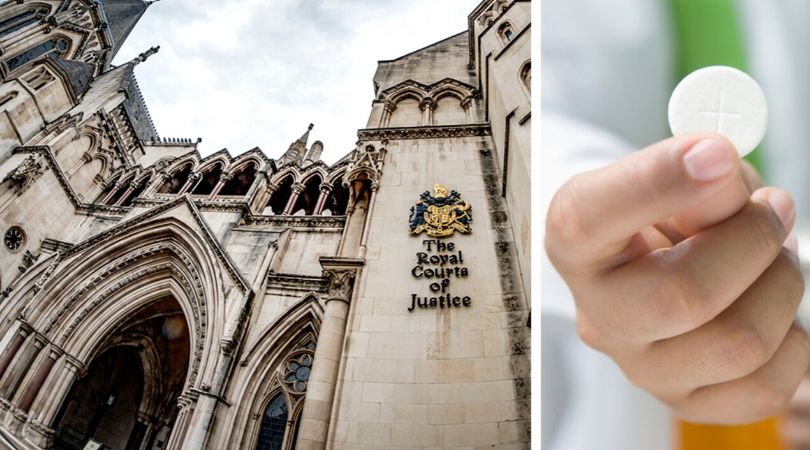 LONDON (ChurchMilitant.com) - A High Court judge has ruled that prohibiting a Roman Catholic from attending church to receive the sacraments may have infringed the European Convention on Human Rights.

Justice Lewis delivered his judgment Monday at the Royal High Court of Justice ruling that "the restriction on the use of a Roman Catholic church for communal worship and the taking of the sacraments involves an interference with Article 9(1) of the Convention."

Lauren Monks had sought a judicial review challenging the government's Wuhan virus restrictions, which prevented her and her 10-year-old son, who attends a Catholic school, from receiving Holy Communion or attending public Masses.

Monks filed the challenge with her employer, Simon Dolan and another child whose identity cannot be disclosed for legal reasons.

"This whole case is about challenging the ruinous lockdown laws imposed by the government. These laws have taken away people's civil liberties to an unprecedented degree and caused huge damage and disruption to so many people's lives and livelihoods," Dolan told Church Militant.

"This has included not just the rights of families and friends who live apart to meet and see each other, but also the religious rights and freedoms of those who wish to practice their faith with others," he said.

"The lockdown laws imposed by the government directly interfered with this right because they made communal worship illegal and impossible. In our case, we are claiming that these restrictions were disproportionate and therefore a breach of the second claimant's [Mrs. Monks'] Article 9 rights," Dolan, a successful businessman, explained.

We have now arrived at a situation where secular and unbelieving judges have a greater concern for the rights of believers than do the bishops themselves.

Dolan's Jota Aviation company, which has been delivering personal protective equipment (PPE) to the National Health Service and other businesses that employ 600 people, has suffered as a result of the Wuhan virus restrictions.

"The judge accepted that the part of our case involving public worship was arguable as it had also been held arguable in an earlier High Court lockdown case involving a Muslim worshipper, Mr. Hussain," Dolan said.

The law has now changed to allow larger groups of people to gather for religious and other purposes. The judge, therefore, wants to decide whether it is still the case that there is arguably an interference with Article 9 rights or whether the new laws have made the challenge "academic," to use his words.

The 87-page claim filed by Dolan and Monks argued that the emergency regulations imposed by the health secretary were illegal, breached human rights laws and failed to take account of other significant factors.

The claim also argued that the prohibition on the use of places of worship for communal worship involved a breach of Article 9 of the European Convention on Human Rights, which gives everyone "the right to freedom of thought, conscience and religion" and includes the freedom to "manifest his religion or belief in worship, teaching, practice and observance."

View From the Bench

Even though churches were now open for public Masses and the issue had become "academic," the judge invited the parties "to make further submissions on that issue."

London barrister James Bogle explained to Church Militant the significance of the judgment: "It seems that governments may have overstepped the mark in requiring churches to close."

"It is worth noting that the French Administrative court ruled that the closure of churches was unlawful, as did the New York City District Court, both in recent rulings. Mr. Justice Lewis seems open to a similar ruling in England," Bogle said.

"Indeed, in New York, even after the successful challenge of Mayor de Blasio and [Gov.] Cuomo and their decision to close churches, the bishops still refused to open the churches," he pointed out.

Some Catholics and Muslims appear to be fighting much harder for the right to reassemble than many evangelicals.

"We have, it seems, now arrived at a situation where secular and unbelieving judges have a greater concern for the rights of believers than do the bishops themselves," the Catholic barrister lamented.

Speaking to Church Militant, Dave Brennan, executive director of pro-life Brephos, commended the efforts of lay Catholics who were fighting for the freedom of public worship — comparing this to the capitulation of many evangelicals.

"Mr. Justice Lewis — as far as I can tell not a Christian — is far more sympathetic to the charge that shutting down churches was illegal than is John Stevens, the National Director for the Fellowship of Independent Evangelical Churches," Brennan said.

"And some Catholics and Muslims appear to be fighting much harder for the right to reassemble than many evangelicals, some of whom are actively opposing their brethren's attempts to call the government to account over this," he added.

Brennan scorned the injunction issued by Stevens urging Christians not to talk to other Christians at church in case they transmitted the virus.

We are concerned that history could well repeat itself if the government were to impose another lockdown.

"Have we developed some kind of Stockholm syndrome? Do we even want to recover the communal life expressed in Acts 2, where they gathered daily in the temple and in homes, breaking bread and having all things in common?" he asked.

Asked why it was so important to bring this case against the government, Dolan warned: "We are concerned that history could well repeat itself if the government were to impose another lockdown."

On Monday, Church Militant reported on 25 Christian leaders in England — including a Catholic theologian — launching a judicial review of the churches' lockdown, arguing that the regulations breached the Magna Carta.