Jury ‘Shaken’ After Inside Look at Abortion Biz 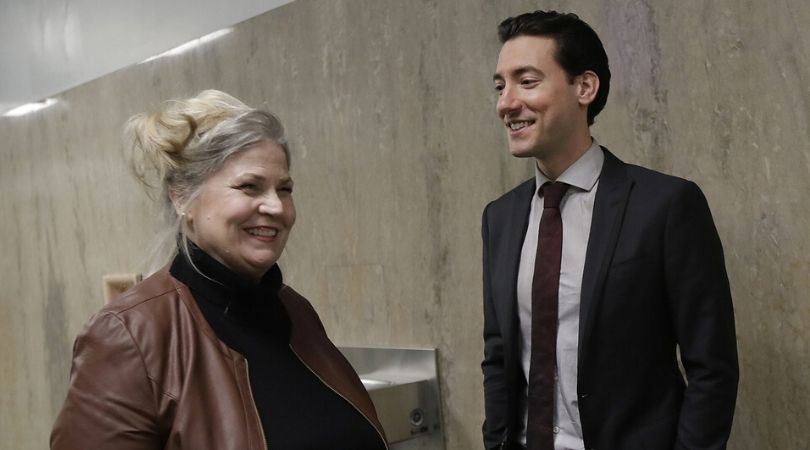 SAN FRANCISCO (ChurchMilitant.com) - The jury in the civil trial against undercover journalists who exposed the aborted baby parts market was left "shaken" after viewing a video clip of the abortionist describing "gruesome" things over salad.

In a video update, Thomas More Society (TMS) President and Founder Thomas Brejcha said it was a great day and one "that seldom has ever been witnessed in an American courtroom."

Peter Breen, vice president and senior counsel for TMS, added, "Today, finally, in the David Daleiden lawsuit ... we were able to show a four-minute clip to the jury of doc casually eating lunch and discussing just the specifics of the harvesting of fetal organs and parts."

"The jury was shaken today," Breen said. "It was really a powerful day in the case."

Brejcha added that one of the jurors had his face in his hands while the doctor discussed the demand for fetal livers and whole hearts.

In testimony earlier in the month for the preliminary hearings for the 14 felony charges, Merritt and Daleiden are facing, a former Planned Parenthood worker testified that he was handed whole babies and harvested their beating hearts.

Once, when he refused to harvest the organs of twins that were born alive and "cuddling each other," he said, "[T]he abortion doctor drowned them in a pan of water."

Breen explained that Planned Parenthood fought "tooth and nail" to prevent these videos from being shown to the jury.

"They didn't want the jury to actually see why the public was so incensed," Breen said.

This video was only allowed for a technical reason. During the clip, there were around 30 waiters passing by the table and the doctor had no problem discussing "extremely sensitive, graphic, gruesome things" with so many people around, Breen said.

Breen said showing the video was a turning point in the case. He believed the jurors were genuinely concerned for the doctor but "when they saw the four-minute clip, it caused a lot of lights to go off in people's minds."

He added that, according to the First Amendment, "you can't be held liable for what the public does in reaction to a video like what was released by the Center for Medical Progress."

We hope more of the illegal activity, unsavory activity of Planned Parenthood gets into courtroom records.

Breen also noted that Planned Parenthood's lawyers are desperately trying to keep out all evidence of the government's investigations into the alleged fetal body parts trade.

Brejcha explained that Orrick has been limiting the case to make it about fraud, and when Jon Dunn, CEO of Planned Parenthood Orange and San Bernardino Counties, testified that he believed the videos were being used to influence elected officials to restrict access to and funding for abortions, Breen took the opportunity to mention the Orange County district attorney.

"We wanted to bring in the fact that he went undercover to show illegal activity of the sort that came out in the courtroom today," Brejcha said. "This was such a huge breakthrough because, despite that ruling, he did allow [Dunn's] testimony."

"There's a thriving market in aborted infant body parts," Brejcha said. "We hope more of the illegal activity, unsavory activity of Planned Parenthood gets into this courtroom records."

Planned Parenthood's argument for their lawsuit is that the conversations were confidential and that they are entitled to damages. Orrick agreed with Planned Parenthood and has been limiting the case to be solely about the alleged illegal conduct of the undercover investigators.

"The result, unless things change during this trial, is that the jury will never see the evidence of Planned Parenthood crimes," Horatio Mihet, a lawyer with Liberty Counsel representing Merritt, wrote on Facebook. He continued:

In December 2017, lawyers for Daleiden and CMP filed a writ of mandamus asking Orrick to recuse himself owing to his direct connections to Planned Parenthood.

Orrick refused to recuse himself despite helping open, run and fund a Planned Parenthood clinic in San Francisco while he led the Good Samaritan Family Resource Center.

During the preliminary hearings for the criminal trial in September, lawyers for Merritt and Daleiden attempted to argue that the 14 felony counts should be thrown out because the California Penal Code allows undercover recording if it is done to collect evidence of violent crimes.

Daleiden and Merritt are claiming that the videos are evidence of illegal activity and they were justified because they served the public good.

However, San Francisco Superior Court Judge Christopher Hite agreed with California prosecutor Johnette Jauron, who argued the abortion workers' names must be kept confidential because they are afraid of "bodily harm."

Wednesday's testimony also uncovered that Planned Parenthood medical directors' names are published on websites and that videos of them associated with abortion advocacy, including Dr. Deborah Nucatola, are available on the internet.

Testimony for the civil trial is expected to continue for some time, and a ruling is expected on Tuesday whether the criminal trial will move forward.