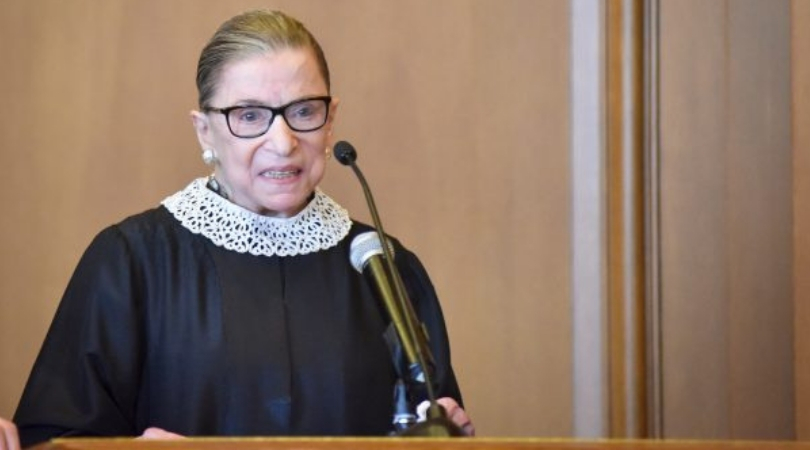 Health of Supreme Court's frailest member once again in doubt

WASHINGTON (ChurchMilitant.com) - The health of the Supreme Court's oldest and arguably frailest member is back in the news, raising speculation as to the imminence of a court vacancy.

According to a public statement issued Friday by High Court spokeswoman Kathy Arberg, Justice Ruth Bader Ginsburg underwent three weeks of radiation treatment starting on Aug. 5, after a routine blood test and biopsy revealed a malignant tumor on her pancreas.

"The Justice tolerated treatment well," Arberg said, adding that, other than cancelling "her annual summer visit to Santa Fe," she "has otherwise maintained an active schedule."

"The tumor was treated definitively and there is no evidence of disease elsewhere in the body," the statement concludes. "Justice Ginsburg will continue to have periodic blood tests and scans. No further treatment is needed at this time."

The 87-year-old justice has had multiple bouts with cancer, her most recent taking place only seven months ago, in December, when she underwent surgery for lung cancer, causing her to miss oral arguments for the first time in her 25 years as a sitting Supreme Court justice.

Just after the surgery, she cast the deciding vote against the Trump administration in a 5–4 ruling, denying his measure to prevent illegal immigrants from seeking asylum in the United States.

Ginsburg is also arguably the most liberal justice on the High Court, with a long and consistent track record promoting abortion and gay rights from the bench.

She came to the Supreme Court with a reputation as a pro-abortion feminist, once serving as counsel for the radical National Organization for Women as well as the American Civil Liberties Union, founding its Women's Rights Project, before being nominated to the High Court by President Bill Clinton in 1993.

Ginsburg's frail health has been cause for speculation and concern, with her supporters worried that an untimely death would lead to a vacancy on the bench, paving the way for a solid conservative majority on the court — which would portend liberals' worst fear and conservatives' greatest hope: the reversal of Roe v. Wade.

The Supreme Court battle that would ensue if Ginsburg's health concerns prove too much for her are expected to eclipse that of Kavanaugh after he was nominated to take the place of retired justice — and pro-homosexual activist — Anthony Kennedy in 2018.

A new vacancy on the court would mean the loss of Ginsburg's critical vote in any abortion or homosexual-related cases — a vote the Left will not give up without an intense fight.

With Ginsburg's health once again in the news, Americans on the Left and on the Right stand poised for the possibility of an imminent High Court vacancy, which would likely make any "frenzy" surrounding Kavanaugh's nomination look like child's play.