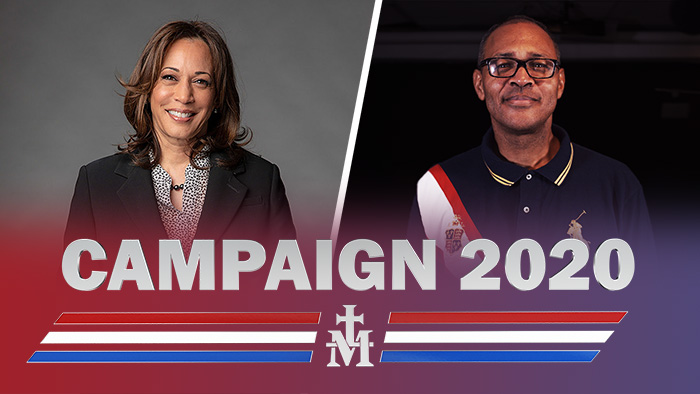 Neither 'black' nor good for the African-American community

Kamala Harris has a "black" problem.

Harris: "We wear those Notorious B.I.G. T-shirts with a lot of pride."

For the liberal black Americans, Harris is not progressive: "She was a hard-nosed prosecutor. She didn't go after the banks. She had felons, largely African American and Latino, fighting fires for a dollar to two dollars, in place of firefighters," said YouTuber Antonio Moore.

Harris hasn't lived the African American experience: "My mom didn't know her pops. Kamala had a Jamaican economist for a dad and a scientist Indian for a mother, and lived in Canada," Moore said.

She went to high school in Canada. Not just high school. Most of her formative years were in Canada. She was moved there at 8 years old, from what we see, and went to primary school there, graduated from high school in Canada. Some people will say, "what's the problem there?" Well, when you look at running for president, it's not like being a pop star or even being a judge. This is somebody who is going to lead the nation, and we need to know your loyalties are entirely with America.

Harris represents globalism: "She's not African American. What she is is a representation that America can bring people in from around the globe, from elite parts of countries, and they can become successful here. ... but what I see also from her father's own admissions is that they come from slave-owners," Moore added.

For conservative black Americans, the Biden-Harris ticket paints a bleak future: "Kamala is an absolute disaster for the black community," said Robert Walker of BLEXIT-Michigan.

For incarcerations: "Look at the crime bill that Joe Biden put in place in 1994, she was the executioner of that crime bill. It was through Joe Biden and through her [that] a lot of African American men were locked in prison," Walker added.

On the economy, Walker noted: "I've studied all forms of economic systems. There is nowhere in the world where socialism works. What works is what we have in this country."

For BLEXIT, he said, only President Trump can provide African Americans with a positive future:

African Americans are leaving the Democratic Party in large numbers. For them, Kamala Harris embodies the systemic oppression that has kept blacks from prospering.