When it comes to confession, the penitent has it pretty easy

A priest in Louisiana just dodged a bullet from the state.

Father Jeff Bayhi was being sued by a woman whose confession he allegedly heard in 2008. According to the woman, who was 14 at the time, she told him she was being sexually abused, and Fr. Mayhi was apparently in violation of Louisiana's mandated-reporter laws, since he did not inform civil authorities of the abuse.

The Louisiana Supreme Court ended up ruling that Fr. Bayhi was indeed bound by the law to report child abuse, since the plaintiff (the penitent) had waived her right to privacy. The Church's sacred seal of confession, however, doesn't relieve a priest from his duty never to reveal what's said in a confession, even if the penitent implores him to do so. In other words, the law of the state and the law of the Church required two opposite courses of action for the priest.

Father Bayhi was prepared to honor the sacred seal and thus be punished by the state. Fortunately, a Louisiana judge ruled last week that religious confessions are protected from mandated-reporter laws, so it appears Fr. Bayhi won't be directly punished for obeying canon law.

In light of the case, some interesting facts about private confession come to mind, which should help us understand and appreciate it more than we probably do.

1: This Wasn't the First High-Profile Story About a Priest and the Seal

In 2001, Fr. Joseph Towle testified in court about a confession he heard in 1989. In that confession, a man apparently told him that he had stabbed and murdered a man two years before and that his two friends were being sentenced for it. Towle kept it a secret, though, even after the murderer confessed his crime to the court. The murderer's confession to authorities was too late, however, and the man's friends remained in prison. After the murderer died in 1997, Fr. Towle discussed the matter with the archdiocese of New York, which effectively gave him permission to testify about what he'd been told, considering the nature of the revelation. The information had apparently not been divulged during a private, sacramental confession, so it was okay to reveal what was said in order to help out one of the sentenced men during appeal. According to a spokesman from the archdiocese, "It was not a sacramental confession, in which confidentiality would be absolute."

2: This Wasn't the First Time the U.S. Government Tried to Circumvent the Seal

In 1996, Fr. Timothy Mockaitis of Eugene, Oregon, went to a local jail and heard the confession of a man who had been suspected in a triple homicide case. During the actual sacrament, neither the priest nor the penitent had any reason to question the privacy surrounding what was said. Ten days later, though, Fr. Mockaitis was shocked to learn the entire confession had been recorded by civil authorities, and there was a search warrant pending from the police to listen to its contents. Following a lengthy legal case, a federal court finally decided that the recording of the confession was illegal and couldn't be used in court. (Strangely, though, the tape has yet to be destroyed.)

3: You Can't Be Forced to Break the Seal on Yourself

Some folks, perhaps uneasy with the absoluteness of the seal, think there surely must be a loophole. Think of a murderer who goes to confession. While the priest could never reveal what the murderer says, couldn't the priest decide only to give absolution to him on the condition he turns himself in to civil authorities? Well, no, not quite. A priest can't make absolution conditional on some future act, as the absolution is granted as soon as the priest says "I absolve you." The only reason a priest can deny absolution would be if he doesn't believe the penitent is truly repentant, which typically means he is still living in sin or the near occasion of sin.

The sacrament of confession has been in the Church since its beginning, but wasn't normally as easy as it is today. There was always some form of private confession, but that wasn't always the norm. In the Early Church, reconciliation after serious sins like adultery, apostasy or murder was a process that took one to seven years and required public penance. According to the Catechism of the Catholic Church,

During the seventh century Irish missionaries, inspired by the Eastern monastic tradition, took to continental Europe the "private" practice of penance, which does not require public and prolonged completion of penitential works before reconciliation with the Church. From that time on, the sacrament has been performed in secret between penitent and priest. (1447)

There you have it: We can thank the Irish for private confession being the norm.

The conference of bishops is to establish norms regarding the confessional; it is to take care, however, that there are always confessionals with a fixed grate between the penitent and the confessor in an open place so that the faithful who wish to can use them freely.

Hence, parishes are supposed to have at least the option of a screened confession, as opposed to face-to-face only.

The takeaway from this piece, of course, is: Stop worrying, and go to confession. 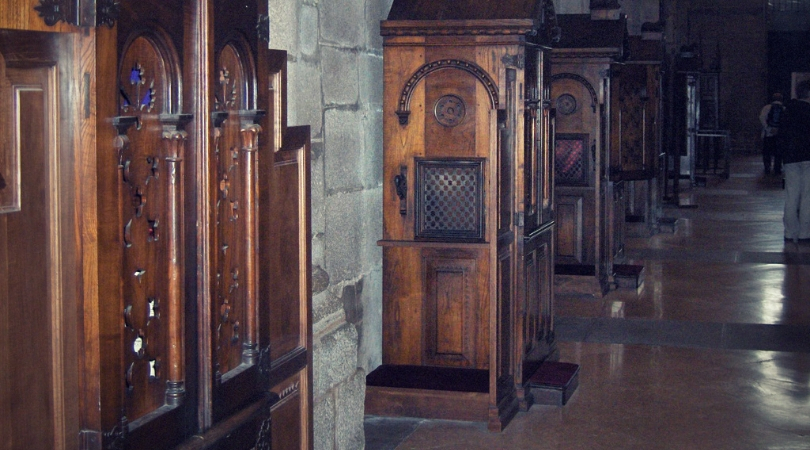