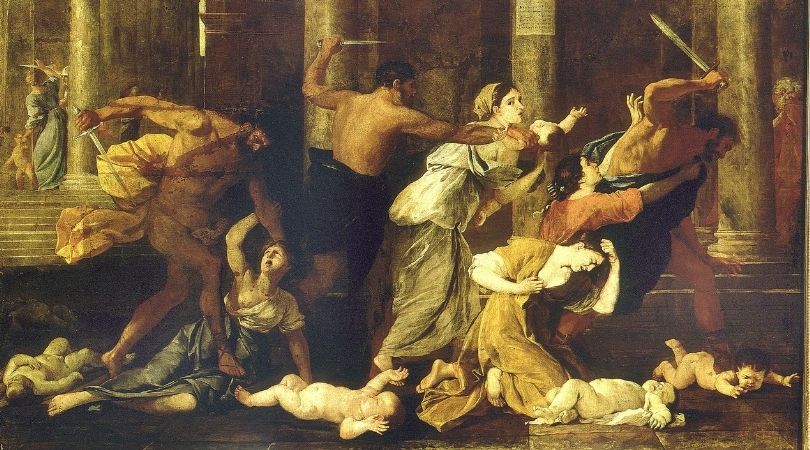 If you want Christmas to be a safe space, you will be sorely disappointed. In the Christmas story, a paranoid puppet king at the service of a superpower mandates jabs with swords for the boys of Bethlehem. A control-freak emperor makes it mandatory for the "whole world" to be registered in his globalist database.

Tyrants tower over Christmas. They shatter the idyllic strains of "Silent Night" where "all is calm, all is bright." As news media and historians of the day black out the massacre of innocents and trumpet the triumph of despots, the alternative media of Matthew and Luke debunk the myth, might and monopoly of the one-world Roman Reich.

Matthew's infancy narrative uses Herod to present a counternarrative against the Roman imperial powers. Herod, appointed King of Judea by the Roman Senate, can control neither foreign Magi nor a helpless local couple who have just had a baby.

The irony is delectable. Herod's power is turned upside down: the Magi are warned in a dream not to return to the infanticidal dictator. An angel appears to Joseph in a dream and asks him to flee to Egypt with Mary and the child. Jesus escapes Herod's jab mandate.

While secular historians rave about Herod's impressive personality, extraordinary intellect, great physical strength, astute political skills and an indomitable will, Matthew — who introduces both Herod and Jesus as "king" — portrays Herod as a paranoid control freak who is "troubled" by the birth of a baby.

Matthew and Luke debunk the myth, might  and monopoly of the one-world Roman Reich.

Herod may succeed in jabbing to death around two dozen baby boys in the one-horse town of Bethlehem, but Matthew's infancy narrative underscores three times the fact of Herod's own death (Matthew 2:14, 19, 20).

"The ironical confirmation of the fact is underlined when Herod the king, whose primary aim throughout the narrative was to kill the child, himself was dead while the intended victim was well and alive," notes biblical scholar F.P. Viljoen. "This sharp contrast is stated in the words of the angel: 'for those who were trying to take the child's life are dead'" (Matthew 2:20).

Luke's propaganda pamphlet against the Roman empire is even more acerbic. Luke goes right to the top and targets Caesar Augustus — the pretentious Roman emperor who supposedly ushers in Pax Romana — a golden age of peace on earth and goodwill to all who will submit to Roman globalism.

Caesar Augustus is hailed as king of peace and declared to be the "son of God." He is hailed at Halicarnassus as the "savior of the whole world" and the Priene inscription proudly proclaims: "The birthday of the god marked the beginning of the good news for the world."

Censuses then raised the sharp and dangerous questions of who runs the world.

But just as the civilized world is extravagantly celebrating the silver jubilee of the Pax Romana; just as the crowds are exuberantly proclaiming Caesar as lord, son of God and savior of the world; a little baby wrapped in swaddling clothes sticks out his tongue and cheekily cries out: "The emperor is naked!"

Luke devotes five verses of his Christmas story to the policies of Caesar Augustus and their impact on the Holy Family (2:1–5) but only two verses to the birth of Jesus (2:6–7), subtly juxtaposing two kings, Caesar and Christ. Luke is targeting the emperor at the peak of his reign — at the height of his policy-making and implementation.

Augustus has decided to flex his political muscles by calling for a census of more or less the whole known world. Quirinius, his sidekick, governor of the province of Syria, is probably the administrator in charge of the census. This is the first time ever in history that an emperor has embarked on a super-ambitious project: a census of the whole provincial empire.

The census is for purposes of taxation, but it is also the emperor's way of demonstrating his dominion over every single citizen of his empire. "Censuses then raised the sharp and dangerous questions of who runs the world, how it's run, who profits by it all, and who is the most powerful man of all," writes New Testament historian Tom Wright.

The census decreed by Caesar Augustus is the equivalent of the emperor's new clothes in the story by Hans Christian Andersen. Luke's Christmas story exposes the census as a charade.

The final act of treason is when Luke dares to confer the vain emperor's titles on the baby in the manger.

The characters around the crib also serve Luke's purpose in exposing the census as a charade. Augustus intends the universus orbis to be enrolled in his census. But the shepherds in all likelihood slip through the census net as they are on the move with their flocks. They don't own property and don't count for tax purposes, and so, they aren't counted. They undermine the emperor's census from below while the multitude (Greek: plethora) of angels who cannot be counted undermine the emperor's census from above. The characters around the crib thus prove Augustus' claim to control extremely precarious.

While Caesar's sycophants pay him homage, the angels laud and magnify the newborn babe: "Glory to God in the highest." Men may build an altar to the pax Augustae, but a heavenly chorus proclaims the pax Christi: "Peace on earth to those favored by God."

Luke dethrones Caesar audaciously enthroning the newborn baby as the ultimate ruler of this world and defiantly empowering the characters around the crib. He calls the angels an army (stratia). A vast angelic army has come to deliver the Jews from Roman rule.

Augustus dwells in a palace, seated on a throne of gold and decked in the finest of royal robes. But the emperor is naked. The real king dwells in a manger, sleeps on a bed of straw and is robed in swaddling clothes.

Caesar has powerful governors like Quirinius and heralds who will trumpet the good news of Pax Romana throughout the empire. But his good news is bogus because Roman peace is achieved only by brute force. It is the Prince of Peace who alone can bring "peace on earth and goodwill to all."

The census decreed by Caesar Augustus is the equivalent of the emperor's new clothes in the story by Hans Christian Andersen.

His heralds will be the lost, the least, the lowliest and the last — people like the shepherds who were even disqualified from serving as witnesses in court. What a dramatic reversal, then, that they should be called by angels to be witnesses and heralds of the birth of the Christ child.

The final act of treason is when Luke dares to confer the vain emperor's titles on the baby in the manger. It is Jesus who is Lord, Savior and Son of God and not the pretentious Octavian Augustus Caesar. It is Jesus who is Wonderful Counselor, Mighty God, Everlasting Father and Prince of Peace. It is Jesus who will bear the government upon his shoulders (Isaiah 9:6).