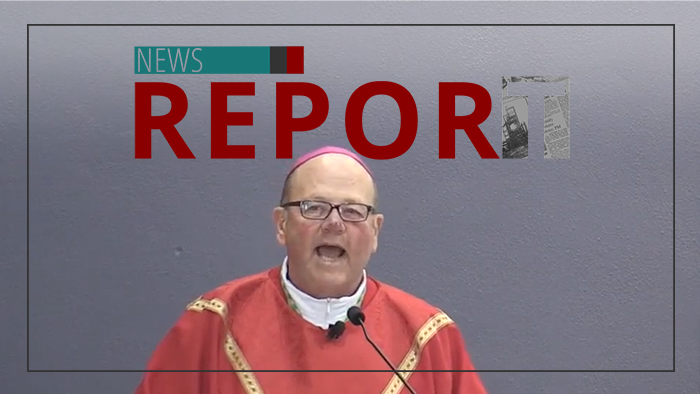 Active opposition to immoral acts leads to change in society. One Kansas bishop, however, wants to go along to get along with the abortion-tainted COVID jabs. Church Militant's Trey Blanton explores the differences between strong and passive leadership.

Bishop Carl Kemme has a complex history guiding the diocese of Wichita. On the one hand, he praised the courage of Fr. Emil Kapaun who sacrificed his life in the Korean War tending to sick and injured prisoners of war.

On the other hand, Kemme is still telling his priests the Church cannot give the appearance of opposing the so-called COVID vaccine saying, "The authoritative teaching of the Catholic Church ... says it is morally permissible."

Kemme admits, "Vaccination is not, as a rule, a moral obligation." However, the objections of the laity should be brought in line with the hierarchy. Kemme says the jab's connection to abortion is remote, and the bishops have sent a letter to the Food and Drug Administration asking for creation of a vaccine not connected to abortion.

Kemme's pro-vax, no-exemption position is not popular with people around the globe. In Rome on Monday, protesters took to the streets to oppose mandates demanding either vaccination or negative tests just to go to work.

It wasn't long ago when the Catholic Church protected its vulnerable flock by standing up to evil. Under Pope St. John Paul II, communism was dealt a blow when the Church partnered with secular leaders to stand against the Marxist Soviet Union.

As President Ronald Reagan said, "As long as this scar of a wall is permitted to stand, it is not the German question alone that remains open, but the question of freedom for all mankind."

The Berlin wall came down, opening half of Europe to freedom, because leaders opposed evil rather than maintaining a veneer of peace by going along with the status quo.

In July, Kemme warned against Wichita's nondiscrimination ordinance, which could force Catholic schools and organizations to hire active homosexuals. But the ordinance passed Tuesday with no protections for religious groups.