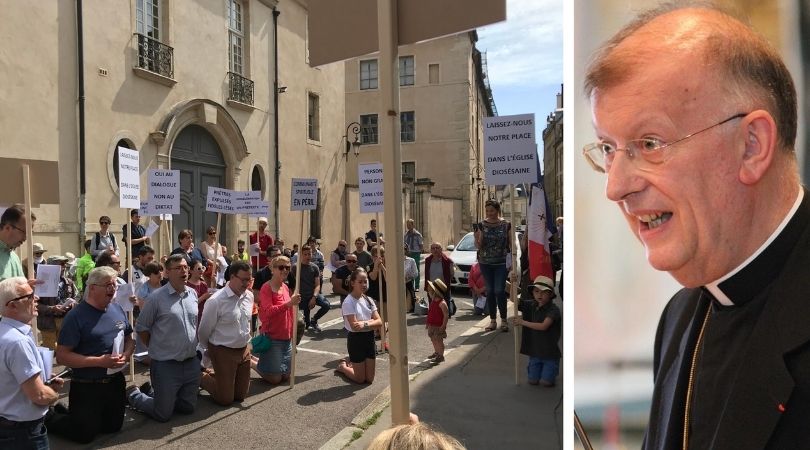 DIJON, France (ChurchMilitant.com) - Buckling under media pressure and the weight of a failing diocese, the archbishop of Dijon offered an olive branch to Traditional Latin Mass (TLM) laity who were prayerfully protesting outside his residence Saturday morning.

Archbishop Roland Minnerath said he would consider reinstating the Priestly Fraternity of St. Peter (FSSP) in Dijon if its clergy agreed to concelebrate at Mass with non-traditionalist priests in the diocese.

Over a hundred Catholics from the Basilica of St. Bernard of Dijon picketed the archbishop's house after Minnerath expelled their FSSP pastors in early June, robbing over 300 laity of a thriving TLM apostolate.

Church Militant spoke to Catholics at the demonstration, who said they were delighted that the prelate came out to meet them.

"When Msgr. Minnerath came out of his house, everyone cheered and said "bravo" for his courtesy of coming out personally to meet us, but it did not last long," a parishioner said.

I do not take your priests away from you, but I only ask them to have an attitude of communion towards us. I've already told you, the problem for me is the refusal of your priests to concelebrate. The communion of the priests with their bishop is something you can't argue with using demonstrations or pressure, and I think it is also the opinion of those attached to tradition.

Responding to a banner on which a parishioner had written: "Concelebration = Un prétexte" (an excuse), Minnerath remarked: "I'm only asking this as a sign of the communion of priests with other priests and with their bishop."

"You can't argue with this. It's the nature of the Church. The unity of the Church goes through the person of the priest; the priest can't exclude another priest," he added.

Either they concelebrate from time to time with us and they stay — them or other priests — or they refuse and leave.

A senior member of the TLM community told Church Militant that Minnerath viewed the refusal of FSSP priests to concelebrate as a rejection of the Novus Ordo (new rite) and the priests of the Novus Ordo.

However, at one point, the gathering visibly reacted when the prelate said: "No priest is forced to concelebrate. But the Church also does not forbid any priest from concelebrating."

The archbishop said he has offered a last gesture of conciliation to the FSSP and is waiting for their response.

I've welcomed this fraternity with goodwill, but, in turn, I expect the minimum they must show towards us. Either they concelebrate from time to time with us and they stay — them or other priests — or they refuse and leave. It's simple! What does it change for you that your priests show their unity with us?

But holding his ground, he added, "I'm doing my job. I have no interest in fostering conflicts, but I can't give up on some issues. Because if I do, I'm useless."

A TLM parishioner told Church Militant: "As the archbishop was leaving after talking to us, we asked him to give us his benediction. He said he would if everyone wanted it. So, we all knelt, and he gave us his blessing in Latin. It was quite a moment!"

The parishioner noted, "I think it's clear the ball is in the FSSP's court now."

Dijon's secular media recently accused the archbishop of failing to breathe life into a diocese in steep decline.

What does it change for you that your priests show their unity with us?

On Wednesday, the conservative monthly L'Incorrect noted: "The diocese of Dijon is in a very bad financial position: its faithful are aging, so donations and bequests risk dangerously decreasing in the near future."

Five to ten percent of the population of Dijon — the provincial capital of the Burgundy region in east-central France — is estimated to be Muslim. The predominantly young Muslim population has established at least three mosques, a Muslim cultural center, a school and a Muslim outdoor market.

While concluding his address, Minnerath suggested that the Vatican was in the process of publishing a document on the TLM. "We assumed he was talking about Pope Benedict XVI's motu proprio Summorum Pontificum," the parishioner added.

Summorum Pontificum grants greater freedom for priests to use the Extraordinary Form (EF) of the Roman rite, otherwise known as the Traditional Latin Mass, in its 1962 form.

According to Vatican II's Sancrosanctum Concilium (Constitution on the Sacred Liturgy), "Concelebration, whereby the unity of the priesthood is appropriately manifested, has remained in use to this day in the Church both in the east and in the west."

So, we all knelt, and he gave us his blessing in Latin. It was quite a moment!

While the regulation "of the discipline of concelebration in the diocese pertains to the bishop," the document notes: "Nevertheless, each priest shall always retain his right to celebrate Mass individually, though not at the same time in the same church as a concelebrated Mass, nor on Thursday of the Lord's Supper."