The Priestly Fraternity of St. Peter (FSSP), a TLM apostolate overseeing 300 Catholics in Dijon, rejected Abp. Roland Minnerath's ultimatum — viewed as tantamount to "blackmail" and in violation of the FSSP's founding principles.

Sources in Dijon told Church Militant that Minnerath also accused the TLM parish of communautarisme — a French ideological term referring to willful and stubborn communalism that rejects the republican community of citizens.

The recent neologism communautarisme has become a stigmatizing term in France for "aggregating individuals into homogenous groups pathologized for their conscious choice of cultural isolation over republican unity."

The news has devastated Catholics belonging to the TLM community of the Basilica of St. Bernard of Dijon — a thriving all-age congregation that has grown over the past 23 years in a diocese in steep financial and numerical decline.

Minnerath told Church Militant: "There was no breakdown in the talks. The FSSP does not respond to my offer to find a priest who will agree to concelebrate."

At a protest June 26 outside the episcopal residence in Dijon, Minnerath warned TLM Catholics that his decision compelling FSSP priests to concelebrate was in anticipation of a decree Pope Francis is reportedly preparing to publish.

"You will have a new motu proprio in the coming days or weeks," the prelate told the demonstrators who were kneeling in prayer and who ended by asking for his benediction.

This is the case in most French and German dioceses and can certainly be considered as a form of moral blackmail.

Unconfirmed reports of the motu proprio have alarmed traditionalist Catholics, who fear Francis will impose severe restrictions on the TLM, if not abolishing it altogether.

On Sunday, the International Una Voce Federation (FIUV), dedicated to preserving and promoting the Extraordinary Form of the Roman rite, published an advertisement in the Italian newspaper La Repubblica.

FIUV expressed concern that "contrary to the previous policy of the Holy See, there are still people within the Church, including some bishops, who would like to see the Extraordinary Form of the Roman rite explicitly suppressed, or subject to further restrictions."

FIUV noted that the growing interest in the TLM is "not due to nostalgia for a time we do not remember, or a desire for rigidity" but "a matter of opening ourselves to the value of something that for most of us is new and inspires hope."

Speaking to Church Militant, Joseph Shaw, chairman of the Latin Mass Society of England and Wales, said "the FIUV, like many others, is disturbed by recent rumors of moves to restrict the celebration of the Extraordinary Form."

The FIUV, like many others, is disturbed by recent rumors of moves to restrict the celebration of the Extraordinary Form.

"Regardless of their veracity, they demonstrate that hostility to and ignorance about the ancient Mass persist in the Church's hierarchy, and it is this we wish to confront," Dr. Shaw, an Oxford philosopher, remarked.

Shaw urged bishops and priests with concerns about the TLM to "come and meet the congregations attending these Masses and the young people and families who have been inspired to live their faith more deeply by this liturgical form."

"They should be a source of hope for their dioceses, not of fear," he pleaded, underscoring a 2020 FIUV global survey on the TLM, which included results from 364 dioceses in 52 countries.

The survey found the TLM "deeply appreciated by groups of faithful of all ages, especially families with children, young people and converts, found in all social and cultural environments, on all continents and in an ever-increasing number of countries."

Shaw's 2021 journal article in the Homiletic and Pastoral Review concluded: "With some variations between continents and regions, the results [of the survey] make clear the very strong association between celebrations of the Extraordinary Form and young people and families."

"The majority of the people, including young people, who attend the Extraordinary Form today have encountered it for the first time as adults," Shaw wrote, observing that the TLM also has "the ability to attract a wide range of ethnic and linguistic groups."

Despite the remarkable success of the TLM, French bishops submitted to the Holy See a devastatingly "contemptuous" appraisal of the rite in February, warning the Vatican "not to extend the celebration" of the Extraordinary Form.

I do not see the point of either forbidding or requiring priests to concelebrate.

Responding to a 2020 Congregation for the Doctrine of the Faith questionnaire, the French episcopal conference said that TLM Catholics remain frozen in an "idiosyncratic conception of the Church" that rejects Vatican II, criticizes Pope Francis and is "hostile to a Church that is too open," Church Militant reported.

The issue of concelebration has been hotly debated since Vatican II. In a 2019 journal article, non-traditionalist Jesuit priest John F. Baldovin called for a more conciliatory approach: "I do not see the point of either forbidding or requiring priests to concelebrate."

The FSSP has come under increasing pressure to allow its members to concelebrate, notes a 32-page dossier published by Una Voce Canada.

"Some bishops have insisted on priests of the Fraternity Una Voce Canada using both missals or at least concelebrating on Holy Thursday as a condition for exercising their ministry within their dioceses," the document notes.

According to the dossier: "This is the case in most French and German dioceses and can certainly be considered as a form of moral blackmail." 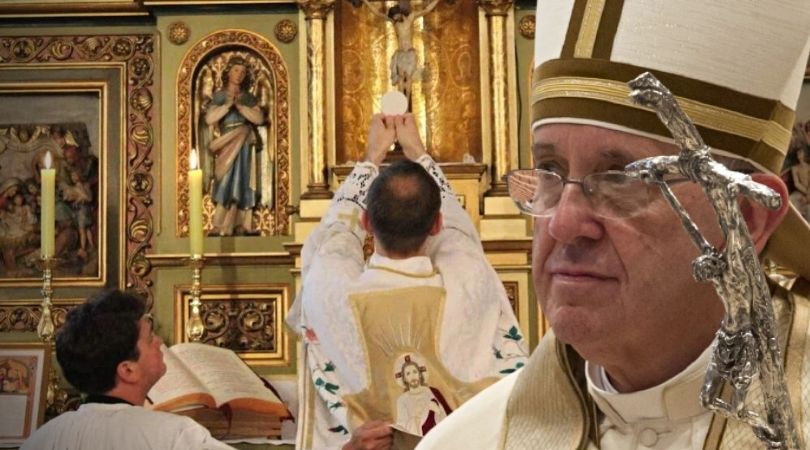