UPDATE (11/2/2015) — Ross Douthat has responded to his left-wing critics from Catholic academia — by doubling down on his stand against heresy.

Noting how both sides of the Synod's division over Communion to the divorced and "remarried" have an incentive to downplay any controversy, Douthat stresses there's a major battle at hand with undeniably high stakes.

He maintains that the orthodox side of that battle has "by far the better of the argument" and proceeds to dismantle the modernists' logic for radical change.

Insisting that major innovation to the Church's traditional practice on reception of the Eucharist will demand "a bitter civil war," Douthat ends with a simple message to the liberal professors trying to silence him: "Welcome to the battlefield."

Douthat recently wrote "The Plot to Change Catholicism," a column critical of the recent push for heterodox proposals at the Synod on the Family. Beyond that, he's come to establish himself as a high-profile conservative voice who's never shied away from debates with liberal elites.

But now a growing group of well-credentialed left-wing Catholics is charging him with having insufficient professional qualifications to write about theology, on top of being too politically partisan and allegedly accusing others of heresy. (The closest Douthat came to the charge was a subtweet saying "Own your heresy.")

"Aside from the fact that Mr. Douthat has no professional qualifications for writing on the subject, the problem with his article and other recent statements is his view of Catholicism as unapologetically subject to a politically partisan narrative that has very little to do with what Catholicism really is," the letter complains. "Moreover, accusing other members of the Catholic Church of heresy, sometimes subtly, sometimes openly, is serious business that can have serious consequences for those so accused."

Apparently concerned for the reputation of a bastion of modern liberalism in the media, its writers noted, "This is not what we expect of the New York Times."

Following the publication of this letter, a battle has broken out between orthodox and modernist Catholics throughout various online publications and Twitter.

First to escalate the situation was Fr. James Martin, editor-at-large of the Jesuit America magazine. 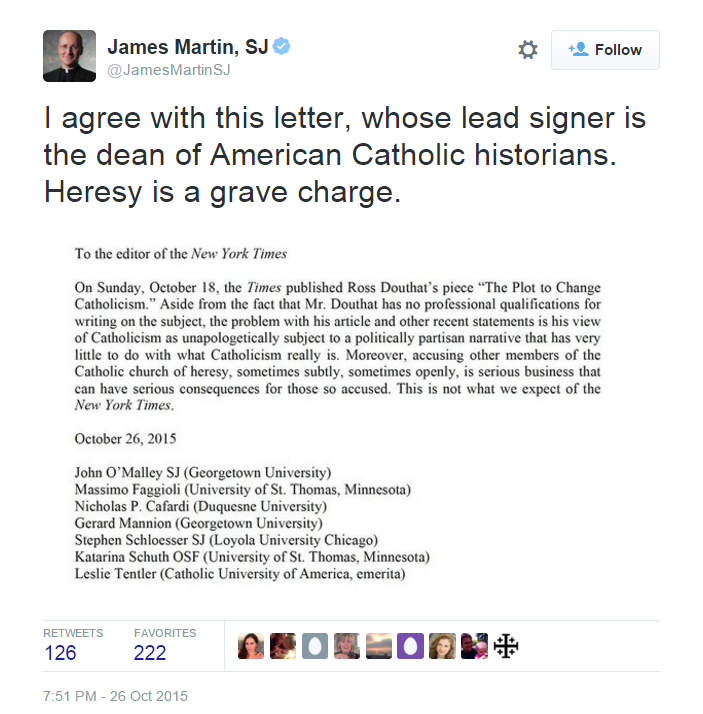 Now other writers, including Rod Dreher, are coming to Douthat's defense, saying his critics ("thin-skinned theologians") are trying to silence him with blacklisting McCarthyite tactics. First Things has its own parody of the letter.

Today, Douthat said his response is summed up in a piece he wrote about one year ago about the heretical implications of the proposal of Communion for divorced adulterers, "A Church, Not a Party."