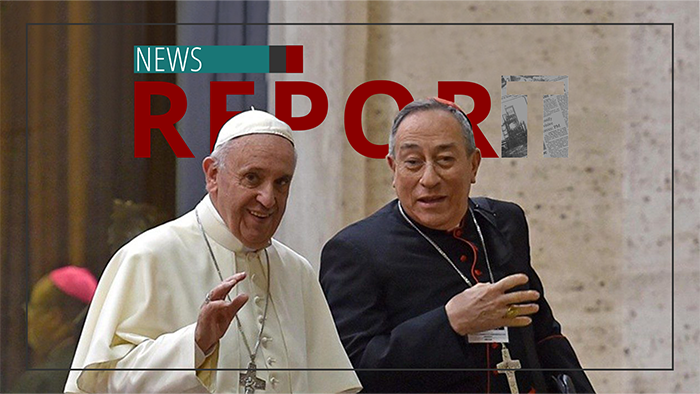 Called 'vice pope' for his influence

A left-leaning cardinal and close confidant of Pope Francis is resigning. Church Militant's Paul Murano outlines the end of a sad era that has included financial impropriety and sexual abuse cover-up.

Honduran cardinal Óscar Rodríguez Maradiaga is submitting his resignation to Pope Francis. It's the second time the 79-year-old cardinal has done so. The first was at the mandatory retirement age of 75, but the pope didn't accept.

Maradiaga, the current archbishop of Tegucigalpa, is head of the pope's "C9" council of cardinal advisers. He has been nicknamed the "vice pope" for his closeness with Pope Francis.

Cdl. Óscar Rodríguez Maradiaga: "Many people are criticizing Laudato Si' without knowing it."

The retiring cardinal has been besieged throughout his tenure with the scandal of financial and sexual abuse cover-up.

Much of this was recorded in the book Sacred Betrayals: A Widow Raises Her Voice Against the Corruption of the Francis Papacy.

Author Martha Alegría Reichmann and her late husband were close friends with Maradiaga for almost 40 years.

Cdl. Maradiaga: "We all depend on one another. We are family."

After losing all their money in the cardinal's investment schemes, she wrote the tell-all book about the so-called vice pope.

Video narrator: "His work continues to challenge the leaders of the world's richest nations."

Among the scandals reported, Maradiaga allegedly covered up the sexual abuse and misconduct of his auxiliary bishop.

He is said to have diverted millions of dollars of Church money to fraudulent investment schemes.

And he likely played a decisive role in recommending bishop nominees to the Holy See, like heterodox cardinal Blase Cupich of Chicago.

Cdl. Maradiaga: "This is justice; this is social justice."

The pope is expected to accept Cdl. Maradiaga's resignation this time. But with this unpredictable pontificate, who knows?

Responding to the accusations against him, Maradiaga once said on Honduran TV that Pope Francis telephoned him to say he was "sorry for all the evil they have done against you."