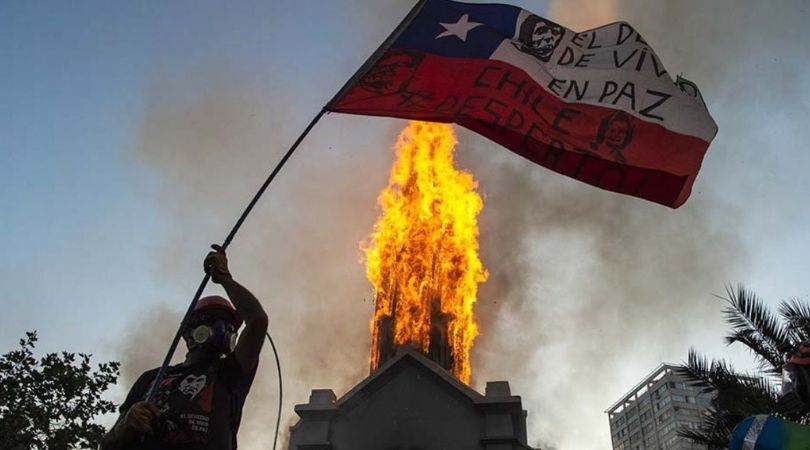 SANTIAGO, Chile (ChurchMilitant.com) - Anarchists, radicals and Antifa protesters are being blamed for arson that destroyed two Catholic churches in Chile, which followed more than a year of violent protests in the South American republic. The destruction has drawn comparisons to sackings of churches during the 1930s civil war in Spain and the more recent leftist rioting in the United States.

The first church to go up in flames was San Francisco de Borja parish church, which has long been used as the chapel of Chile's national police force, the Carabineros.

On Oct. 18, hours later, the century-old parish church of Our Lady of the Assumption was burned. Spectators watched as fire brigades uselessly sprayed water on the flaming church, one of the oldest in Santiago, the national capital, where onlookers cheered as the burning steeple tumbled to the ground.

In one of the two burned churches, vandals scrawled the words "Death to the Nazarene," as well as other obscene graffiti.

Near the two churches is Plaza Italia, the city square where opponents of President Sebastián Piñera have rallied for months, protesting inflation and government policies that have led to price hikes for public transportation, among other developments.

Following the destruction of the churches, Culture Minister Consuelo Valdes tweeted: "Indignation and sadness over the fire and destruction of the parish of La Asunción, and the attack on the San Francisco de Borja church, both heritage buildings."

[O]nlookers cheered as the burning steeple tumbled to the ground.

Vandals looted San Francisco de Borja church, dragging religious statuary into the street to be burned. Apart from destroying the churches, protesters looted a supermarket and other shops nearby, while there were reports that police stations on the periphery of the capital were attacked by masked assailants. The weekend riots came just one week before more than 14.5 million Chileans will vote on whether to replace the country's constitution, which leftists assert is the origin of social and economic inequalities.

Over the Oct. 17–18 weekend, tens of thousands thronged in the streets of Santiago. Some protesters erected barricades leading to Plaza Italia, which they dubbed "Dignity Square," as well as other neighborhoods in Santiago.

Chaos in Chile precedes a vote on a new constitution being pushed by the United Nations.

Marking the anniversary of protests that rocked Chile and brought about the promise of a constitutional reform demanded by leftists, protesters of all ages and social groupings thronged to Plaza Italia. Many carried flags and banners demanding economic change and social equality while chanting the catchphrase: "Chile has awakened!" Protests also broke out in other cities, such as Antofagasta, Concepción, Valparaíso, and Viña del Mar. Reportedly, the presence of police was initially light early on Oct. 18 but grew as violence broke out.

Police reported 107 violent incidents as 40,000 law officers sought to keep order. Some 116 law enforcement officers were wounded in the protests, and there were 580 arrests. President Piñera vowed to prosecute lawbreakers.

Heretofore, Chile had been considered one of the most stable democracies in Latin America.

This is not the first time that leftists have vandalized churches. In November 2019, for instance, masked anarchists entered a Santiago church during mass protests, staged a mocked execution of a Catholic priest and dragged benches and religious statuary into the street to be used as barricades and fodder for bonfires.

On Oct. 19, President Piñera denounced the political violence. He said:

These criminal acts should be condemned by all of us who believe in democracy and want to live in peace. And we must condemn not only those [who] directly carry out this criminal violence, but also those who in one way or another promote, excuse or justify it. Yesterday we witnessed two behaviors and realities. Thousands of Chileans peacefully protested, which is a legitimate right. We also saw a minority of criminals who unleashed a wave of violence, looting and vandalism, including the burning of two churches of great historical value, attacks on police stations and destruction of public and private property.

Among the leftists arrested by police was Claudio Melgarejo Chávez. A member of the violent Lautaro Youth terrorist group, he had been sentenced to life imprisonment in 1993 for his role in a bank robbery that resulted in the wounding of two police officers. However, he was paroled in 2005. On Oct. 19, he was arrested because he was participating in a protest without a required health permit. Chile continues to be under precautions for COVID-19.

On Oct. 19, Abp. Celestino Aós Braco of Santiago visited the ruins of one of the churches. He told local media that the "attack threatens not only material things, but also the souls of Chileans and Catholics." In words directed at parishioners of Our Lady of the Assumption church, he said, "May each one of us seek the challenge to say: 'Lord, make me an instrument of your peace, because this is the moment — while we face those who act with violence — when we need you most. May you and I become agents of peace and kindness.'"

Heretofore, Chile had been considered one of the most stable democracies in Latin America. It has been ranked as seventh among the freest economies in the world, seeing significant gains for the poor. In 2006, Chile had the highest nominal GDP in Latin America, while in 2010 it became the first country in the region to join the Organization for Economic Co-operation and Development (OECD). Its economy is largely dependent on the export of copper. Over the last year, however, unemployment rates have skyrocketed as social tensions increased.

Leftists demand reform of the 1980 constitution, which has been in place since the days of dictator Augusto Pinochet — arguing that it favors economic liberalism. Local polls show that some 80% of Chileans plan to approve the drafting of a new constitution.

International organizations, such as the United Nations, have condemned alleged violence committed by police in Chile.

After protests last year were joined with arson and confrontations between extremists and police, President Piñera responded by holding back on price hikes for public transportation. Continued vandalism, which included attacks on subway stations, private businesses and churches, brought about significant police response and a state of emergency.

International organizations, such as the United Nations (U.N.), have condemned alleged violence committed by police in Chile. Since September 2019, there have been some 30 people killed and thousands injured, some severely, in clashes between police and civilians. According to prosecutors, there are currently 4,600 cases of alleged police excesses currently under investigation.

On Oct. 25, Chileans vote on a referendum whether to change the country's current constitution. The U.N.'s Human Rights Commissioner, Michelle Bachelet — a former Chilean president — called on Chileans to vote in the plebiscite and approve the formation of a drafting committee to produce a document that she said should include a "perspective on gender" and be "more representative" of all Chileans.