Letter to Parish: COVID Excuses Not Cutting It 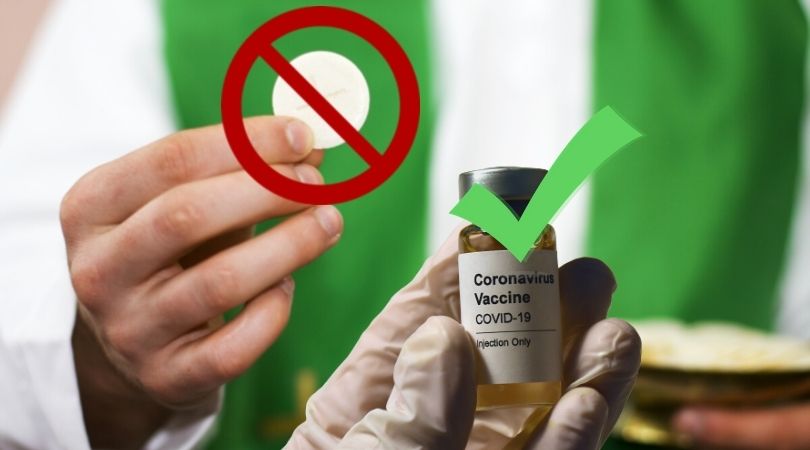 A Catholic from Baton Rouge, Louisiana who read about an Indian River, Michigan parish supporting mandatory COVID shots sounded off in a letter to the parish. The letter called out the parish's unsaintly concern for physical well-being over spiritual health and clergy's complicity with governments to deny the faithful access to the sacraments, despite their canonical obligation to administer them. It also cited the broader Church's double standard in allowing prominent Democrats to profane the Holy Eucharist while denying that same access to the faithful.

You state, "Requiring the vaccine would allow everyone to participate equally in worship and the sacraments." You cannot take away the faithful's access or right to the sacraments, ever. Making this statement is wrong. It is contradictory with another statement you made, "Since the beginning of the pandemic, church officials have tried to keep churches open for in-person services. These attempts have been motivated by a deep passion for the faithful to have access to the grace of the Mass and the sacraments." If that is truly the motivation behind these attempts, then why are you recommending Mass and the sacraments be restricted even more? Church officials have not tried to keep churches open. The faithful saw immediate capitulation from our leaders to the whims of government officials, who said that abortion facilities could remain open, but churches were a high risk. Either you are lying, or you did not experience what a majority of the faithful did, and so your comment was misinformed.

You mention, "Churches have an ethical obligation to protect the health of clergy, staff and worshipers," and say, "It is morally irresponsible for churches to invite people to worship and receive the sacraments without taking all effective steps to minimize this risk."

I ask you, is it morally responsible to care for people's bodies and give no regard to their souls? I would say that it is more irresponsible to not offer the sacraments to the faithful. Does the Church not have the moral obligation of saving souls? It is morally irresponsible for churches to invite people to worship and receive the Eucharist without first examining and discerning.

Joe Biden, John Kerry and Nancy Pelosi all publicly support abortion. The Church teaches, "Direct abortion, that is to say, abortion willed either as an end or a means, is gravely contrary to the moral law." This has been taught by the Church "since the first century" (CCC, 2271).  CCC 2272 teaches us, "Formal cooperation in an abortion constitutes a grave offense. The Church attaches the canonical penalty of excommunication to this crime against human life." Canon 915 states, "Those who have been excommunicated or interdicted after the imposition or declaration of the penalty and others obstinately persevering in manifest grave sin are not to be admitted to Holy Communion." Even if Joe, John, or Nancy are not immediately excommunicated by their actions, which support abortion, they are still obstinately persevering in manifest grave sin. Yet they are still given the Most Blessed Sacrament. So, while you support this idea that we must be healthy in body to receive the Eucharist, the faithful see that the soul can be completely dark with no light in it and not be hindered from receiving the Source of Life. The care for the soul is neglected, while the façade of charity is presented. What health does man have if his soul is dead? A perfectly healthy body can still have a soul diseased by the leprosy of sin.

You have no authority to restrict the sacraments to any of the faithful. Canon 912 states that perfectly. Canons 911, §1 and 921 §1,3 state the responsibility of those ordained men in caring for the sick. You have the duty to bring to the sick the Most Holy Eucharist as Viaticum. Those faithful in danger of death from any cause are to be nourished by this Viaticum, and while the danger of death lasts, it is recommended that Holy Communion be received often. But as soon as the China virus came around, churches were shut down, the sacraments were restricted or simply not available to the faithful. These restrictions broke canon law! For as soon as there was fear that you may die from COVID, the sacraments were withheld! What if someone who needed Viaticum died during that time? You have the responsibility, according to canon 922, to be zealous and vigilant that the sick are nourished by Viaticum. Holy Viaticum is not to be delayed too long. We, the faithful, would be kept from the sacraments and Mass without a vaccine, which the Church says cannot be made obligatory on us, while you get to ignore your obligations to bring the Most Holy Eucharist to the sick? Where is your courage?

As soon as the China virus came around, churches were shut down, the sacraments were restricted or simply not available to the faithful. These restrictions broke canon law!

Think of St. Damien, who gave his own health to live among lepers. Think of St. Francis of Assisi, who neglected his health so the lepers he touched could feel the embrace of another person. If the CCP virus was so deadly, you would be under obligation to bring them the Eucharist as Viaticum, regardless of your health or theirs. Being healthy is not a requirement for receiving Our Blessed Lord. Being in a state of grace is, and there were many saints who did not enjoy health of body, but whose souls were in states of grace that I can only hope to enjoy one day.

This is what I think, father.