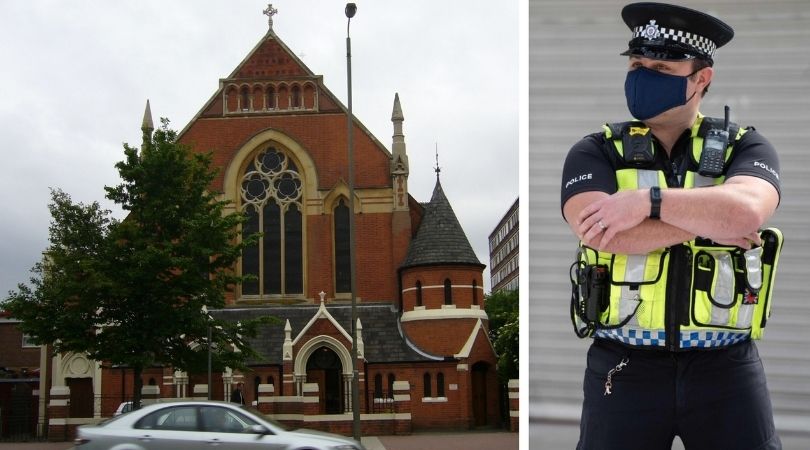 BALHAM, London (ChurchMilitant.com) - Metropolitan police officers unlawfully disrupted the Good Friday service at a Polish church in South London, ordering clergy to stop the Liturgy and threatening to fine or arrest faithful Catholics if they did not disperse immediately.

Police entered the sanctuary of Christ the King Church in Balham at around 6 p.m., during the Liturgy of the Lord's Passion at the time of the rite of the Veneration of the Cross, the parish said in a statement.

"We were not allowed to finish the celebration. The police found our liturgical assembly illegal, ordering everyone to leave our church immediately, threatening a fine of £200 for each parishioner present or arrest," the statement noted.

"The faithful obeyed this order without objection," the parish clergy noted, insisting that the police had "brutally exceeded their powers" as the church had complied with all governmental COVID-19 requirements for holding services.

Both the latest government regulations and guidelines from the Catholic Bishops' Conference of England and Wales explicitly permit services during Holy Week as long as certain sanitary rules are adhered to, the church added.

Dr. Adam Nowak, a London-based Pole associated with the Balham congregation, told Church Militant that the worshippers "don't understand the reason the police went in, because services are allowed, the service was ticketed and people were wearing masks."

"They feel like the police were not even sure what the official reason for sending people out was. The police said it was an unlawful gathering, but it wasn't," Nowak explained.

To see British police officers forbidding Polish Catholics from marking Good Friday feels like a betrayal of what Britain is meant to stand for.

"If there were too many people in the church for their liking, they could have explained that, but they just said it was an unlawful gathering and told people to leave or they would be fined," he continued.

The church has complained to the Polish Embassy, and a video of the draconian assault on the congregation's freedom of worship has gone viral and triggered outrage on social media.

In the video, translated for Church Militant by Dr. Nowak, the assistant priest, Fr. Aleksander Dasik, addresses the congregation, informing them that somebody has snitched and called the police, and the police have arrived saying that the church isn't obeying regulations.

Father Dasik tells the congregation that he isn't sure which regulations are being broken and says he has asked the police to specify the nature of the infringement because all parishioners are wearing masks, maintaining social distancing and have specially reserved tickets for the service.

That Poles in Britain, some of whom will remember life under Stalinism, now face police threats for the 'crime' of Easter worship brings shame upon this country.

The police officer then speaks to the congregation in English, pointing out, "This gathering is, unfortunately, unlawful under the coronavirus regulations we have currently," and that worshippers "are not allowed to meet inside with this many people, under law."

"At this moment in time, you need to go home. Failure to comply with this direction to leave and go to your home address ultimately could lead you to be fined £200 or, if you fail to give your details, to being arrested," the police officer says from the lectern.

Once the police officer is done talking, the parish priest, Fr. Władysław Wyszowadzki, asks people to leave so that everyone is not fined; he informs them that Communion will be received spiritually.

He continues to tell people to leave the church, or the officers will call for more police. The two priests can also be heard talking among themselves about making a complaint and also about whether the traditional blessing of baskets of food (where people bring baskets of food to be blessed for Sunday) is going to have to be called off on Saturday.

Archbishop John Wilson of Southwark visited the parish on Holy Saturday. The archdiocese released a statement reporting what had happened and noting that "the remaining liturgy wold have taken approximately 30 minutes to complete." The statement did not condemn the police intrusion into the service.

However, in an unusual show of solidarity, liberal commentators are blasting the despotism and double standards of the police.

"To see British police officers forbidding Polish Catholics from marking Good Friday feels like a betrayal of what Britain is meant to stand for," remarked liberal columnist Brendan O'Neill, excoriating the police for their "tin-pot tyranny" on "the most solemn day in the Catholic calendar."

"In Poland, under the Soviets, life was often hard for Catholics," the liberal columnist noted. "That Poles in the United Kingdom, some of whom will remember life under Stalinism, now face police threats for the 'crime' of Easter worship brings shame upon this country," O'Neill, editor of Spiked, wrote.

"Seriously, when Catholics cannot gather in peace on the most solemn day of their Faith, in a week when COVID deaths in London have continued to fall dramatically, then we really have gone too far," O'Neill added.

"I want to support our police forces, but this sort of thing makes it very difficult," Nigel Farage, leader of the Brexit Party, tweeted.

Liberal Anglican vicar and well-known commentator Dr. Giles Fraser (who pastors a Church of England parish in Balham) also blasted the police. "The police are now shutting down churches. This from just up the road, yesterday. What have we come to?" Fraser lamented.

The police are now shutting down churches. This from just up the road, yesterday. What have we come to?

Commentators on social media also slammed the police for allowing daily protests by Muslims outside the Batley Grammar School in West Yorkshire after a teacher showed images of the Muslim prophet Muhammad in a religious education class.

Meanwhile, Metropolitan police released a statement explaining that "officers were called to a report of crowds of people queuing outside a church in Balham."

The statement blamed "a large number of people inside the church" and insisted that "some people were not wearing masks, and those present were clearly not socially distanced."

The police said that they were "concerned about the risk of transmission of the COVID-19 virus as a result of large indoor gatherings at which people are not socially distanced and some are not wearing masks," and so "made the decision that it was not safe for that particular service to continue."

Services for Easter Sunday will go ahead as planned at the Church of Christ the King, the parish announced. 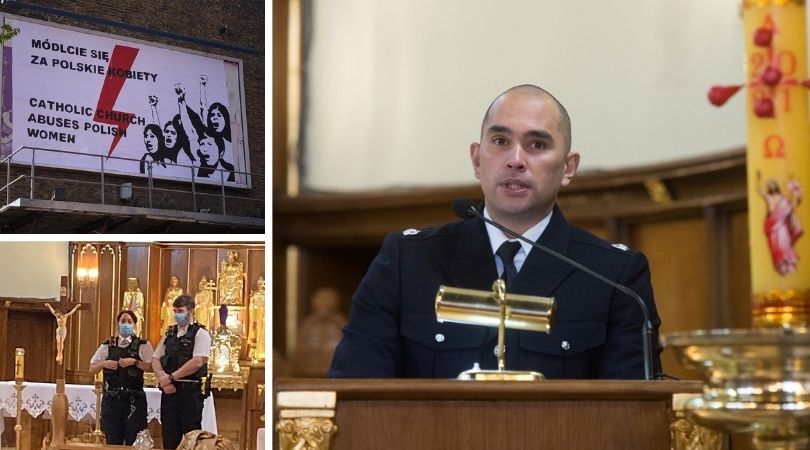