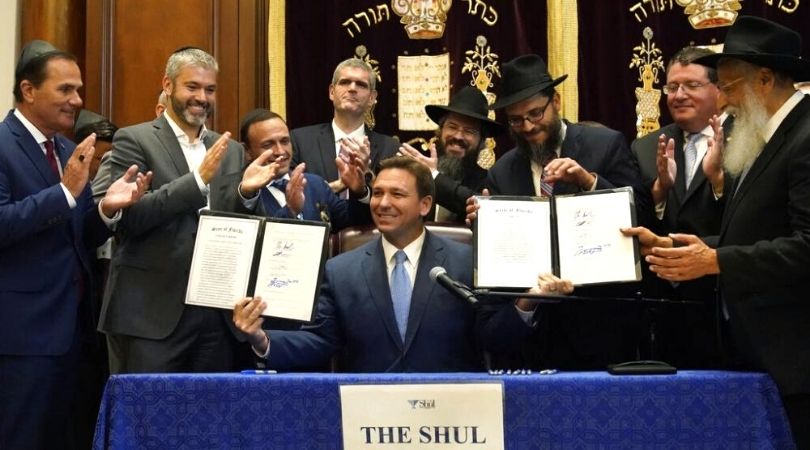 Ron DeSantis signed House Bill 529 into law on Monday at the Jewish community center in Miami-Dade County. The legislation mandates teachers in first-period classrooms have at least one minute of silence per school day.

DeSantis, before signing the bill, highlighted the religious significance of the new law: "The idea that you can just push God out of every institution and be successful, I’m sorry, our Founding Fathers did not believe that."

He also noted the measure allows students to "reflect and be able to pray as they see fit."

Lieutenant Gov. Jeanette Nuñez weighed in as well, stating it will "allow for religious freedom and allow for students to have a minute or two at the start of their day."

It will go into effect starting July 1. The legislation prohibits teachers from telling students how to use the time, but it does allow teachers to make suggestions to parents and guardians.

"Each first-period classroom teacher shall encourage parents or guardians to discuss the moment of silence with their children and to make suggestions as to the best use of this time," it reads.

Senate sponsor Dennis Baxley (R-Ocala) took a milder tone, saying in April that the bill will give students time "just to stop and reflect."

"The Republican who sponsored the bill said that it wasn't about prayer in school. (Of course it was!) But when you question their motives, or their honesty, it's called a personal attack & deemed out of order. No. The Republicans lie, and we need to call them on it every time," he said.

The Republican who sponsored the bill said that it wasn't about prayer in school. (Of course it was!)

But when you question their motives, or their honesty, it's called a personal attack & deemed out of order.

No. The Republicans lie, and we need to call them on it every time. https://t.co/BSDKJuS3fu

Rep. Hardy appears partially correct on the law's intent. To the governor, it does appear to be about prayer. And as a Catholic, DeSantis has championed Catholic moral positions throughout his political career.

Last week, DeSantis blasted the pro-abortion politicians, admitting he doesn't trust them: "The people that aren't supportive of the life cause, they're not people you want to be in a foxhole with on any other political battle. They are the first ones who will sell out to the DC establishment when the going gets tough."

In late May, he signed into law a bill that bans biological men from competing against women in sports competitions — mandating athletes to show their birth certificates before joining an all-female sports team.

DeSantis blasted the pro-abortion politicians, admitting he doesn't trust them.

Religious values appear to remain a top priority for the Sunshine State's leader, causing Florida to build the reputation of being a safe haven for people in the United States who prefer faith over woke secularism.