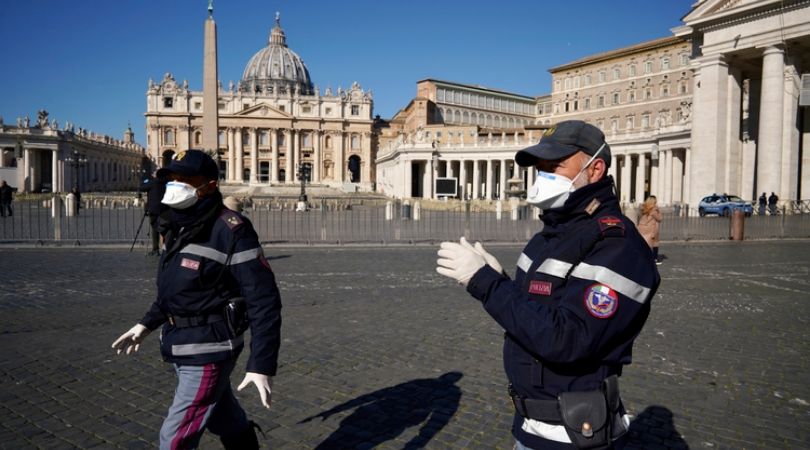 Dear readers of Stilum Curiae, the coronavirus has reached the highest levels of the Vatican. The head of the Italian section of the Secretariat of State, Msgr. Gianluca Pezzoli, is hospitalized in intensive care with COVID-19.

Monsignor Pezzoli is quite young; he was born in Mantua in 1962 and is only 58. He is described by those who know him as a great worker, a man who is reserved and sober. He is certainly not a worldly monsignor. He lives at Santa Marta. Thus it is very probable that he was infected inside the Vatican Walls. His role as head of the Italian section, which is definitely the biggest section of the Secretariat of State, makes it quite probable that before he had symptoms he must have had personal contact with many people, and thus they would have been exposed to the virus.

But very reliable sources tell me that there are actually only five people currently living at Santa Marta, and all of them are in isolation because they suspect they have contracted the coronavirus. The pope has stopped taking his meals in the common dining room. He spends the majority of his time in his apartment on the top floor. His personal secretary brings him lunch and dinner.

We need to remember that when he was young, Jorge Mario Bergoglio underwent a major surgical operation, in which doctors removed a large part of his lung. This explains the breathing difficulties and shortness of breath that sometimes afflict him. Naturally, a person who has this sort of handicap would have a particular fear of a virus that attacks the lungs like COVID-19.

The fact that the pope has decided to eat alone, in his own room, indicates that he is very worried. We recall how Pope Bergoglio decided, when he was elected, not to occupy the papal apartment in the Vatican Palace as his predecessors had done, but to live at Santa Marta. He took his meals in the common dining room, although for some years a row of potted plants gave him a small amount of privacy. But the fact that he has now renounced community life is a sign that he is both worried and prudent.

Any official Vatican information on COVID-19 is lacking. On March 24, Matteo Bruni, the director of the Vatican Press Office, said:

At the present time four people have tested positive for the coronavirus. In addition to the first case that had already been reported there is an employee of the Business Office and two employees of the Vatican Museum. These four persons were placed in isolation as a precautionary measure even before they tested positive, and their isolation has lasted over 14 days; they are presently in the care of Italian hospitals or at home.

The first positive case within the Vatican City State was a monsignor from Bergamo who was summoned by the [Vatican] Health and Hygiene Office. The monsignor was supposed to take up service in the Vatican after coming from his native city of Bergamo, which is one of the cities in Italy with the most outbreaks of COVID-19. But just as in other cases, he had time to spread the infection in the Vatican and elsewhere before he showed any symptoms.

The fact that the pope has decided to eat alone, in his own room, indicates that he is very worried.

In the meantime, another papal journey has been canceled. Pope Bergoglio was supposed to go to Malta on May 31, but his visit has been canceled. We would like to recommend that you follow the development of these matters on a very accurate and well-informed website, Korazym.org. This site was the first one to sound the alarm about the danger of the situation developing behind the Vatican walls. To read the story, click here.

There are two principal things that are suspected as being the source of the contagion.

The first is the Vatican Museums, where up until the moment they were closed the employees asked in vain for masks and gowns to defend themselves from the risk represented in the crowd of tourists entering the museums each day.

The second is a French bishop who made his ad limina visit and tested positive for the coronavirus after he returned. During their ad limina visit, in addition to meeting with the Pope, the bishops visited all of the dicasteries of the Curia. And so this case too offers numerous possibilities that many people were infected.