"Not enough sacerdotal vocations? The Catholic Church brings back a 7th-century custom, entrusting an 'uncovered' parish to a deacon." This is the introduction of an article in the Roman edition of newspaper Corriere della Sera, reporting the news that the diocese of Rome, in September 2018, entrusted the care of a parish to a married, father-of-four deacon.

Andrea Sartori, 49, is the recently incardinated deacon in the Roman parish of San Stanislao. An assistant priest from a nearby church has been designated for Mass and confessions, but for everything else, Sartori counts on a team of other deacons.

Along with other measures, this seems to be a subterfuge to cushion the introduction of a married priesthood in the Church, especially in view of the upcoming Pan-Amazonian Synod, which has for years been drummed as the Trojan horse for the end of priestly celibacy.

Quoting the Italian Episcopal Conference's newspaper, Avvenire, San Stanislao is a place where "synodality is becoming the rule," an affirmation Sartori repeated to Aleteia: "We need to make synodal history."

This seems to be a subterfuge to cushion the introduction of married priesthood in the Church, especially in view of the upcoming Pan-Amazonian Synod.

He also believes his community was "launched towards the future," a future where "the people of God are … the protagonists." Auxiliary bishop of Rome, Gianpiero Palmieri, shares the deacon's view: "San Stanislao lives a special vocation, that of becoming a diaconia." According to the bishop, the idea is "to retrieve an old custom of the Church. In Rome, it exists since the 7th century. … This represents a path that concerns every diocesan community."

Even though Bp. Palmieri insists diaconias aren't a novelty in Rome, there hasn't been news of one there in centuries. This is undisputedly a unique case, and it has been portrayed by the press as the prelude to something bigger. News portal Agrigento Oggi claimed that the "historic innovation will certainly be repeated in other Italian dioceses."

Rainews, the news portal for RAI (the Italian public broadcasting company), declared: "It's evident that this experience is connected … to the shortage of priests. … Similar experiments are already underway, but it's the first of its kind in the diocese of the Pope."

Sandro Magister described a similar operation in an article that predicted the priorities of the Pan-Amazonian Synod by going through Pope Francis' purpose to apply Cdl. Carlo Maria Martini's agenda, which included married priesthood.

This has been implemented before:

In Chiapas, Mexico, the pressure for a married clergy has been made concrete … with the ordination of an exorbitant number of indigenous deacons, in the vast diocese of San Cristóbal de Las Casas. ... The mass ordination of these deacons, all of them married, had its culmination in the years of the episcopate of Samuel Ruiz Garcia. ... [W]ith the retirement of Ruiz Garcia, Rome ordered a suspension of ordinations to the diaconate. It banned the practice of calling them "indigenous deacons."... But after Bergoglio's election, the ban was revoked. In 2014, Rome again authorized the successor to Ruiz Garcia, Bishop Arizmendi Esquivel, to resume diaconal ordinations.

Another concerning episode was the news broken by Catholic daily La Nuova Bussola Quotidiana last November, where it was discovered that Giancarlo Perego, archbishop of Ferrara-Comacchio, had issued an official letter to his clergy with instructions for the celebration of the word of God, according to two attached schemes.

The justification in the letter read:

We have observed for years the continuous decrease in vocations, and consequently, of presbyters for the celebration of the Eucharist. … We're then called to make new choices that allow the faithful to gather on Sunday to praise the Lord, listen to His word of salvation and possibly approach the Eucharist.

La Nuova Bussola Quotidiana interpreted Abp. Perego's gesture was a push towards the Pan-Amazonian agenda, because the archdiocese of Ferrara has 169 parishes for 167 priests. According to the news outlet, Perego's decision was "taken in consonance with the brothers of the Episcopal Conference of Emilia-Romagna" (which recently stated in a pastoral document that continence isn't the only possible choice for divorced and civilly remarried Catholics), so this resolution might be the first of many of its kind in the region.

Another fact that hints that Abp. Perego's was an ideological move is that he has for months been engaged in a campaign to ostracize priests of the society of apostolic life Familia Christi. Familia Christi was erected as an order in 2016 by the previous archbishop of Ferrara, Luigi Negri (one of the strongest voices in defense of the Catholic faith in Italy), who had permanently installed them in the sanctuary of Santa Maria in Vado.

Perego is very strong-willed. He's a revolutionary, and nothing's going to stop him.

In 2018, Abp. Perego ejected Familia Christi from Santa Maria in Vado with the excuse of reforming the diocese's pastoral units. Familia Christi, whose priests celebrated in the ancient rite, had captivated a considerable following and more than 700 faithful signed a plea to Abp. Perego to allow the order to stay. A few faithful have written to local newspapers to try and avoid the move.

Not only has Abp. Perego completely ignored them (the archbishop can be seen here literally walking away from a reporter demanding an explanation) as he moved Familia Christi out of their sanctuary and forbade them to say Mass, he also carried out an unjustifiable process of canonical visitation that eventually lead to Familia Christi being "commissioned for an indeterminate period."

As one can clearly gather from the gravity of this case, "decrease in vocations" is not the reason why Abp. Perego is pushing celebrations of the word of God without a priest, in a diocese where part of the community was thriving in traditional spirituality. This is likely to be a planned maneuver, and as a source close to the Church of Ferrara told Church Militant, "Msgr. Perego is very strong-willed. He's a revolutionary, and nothing's going to stop him." 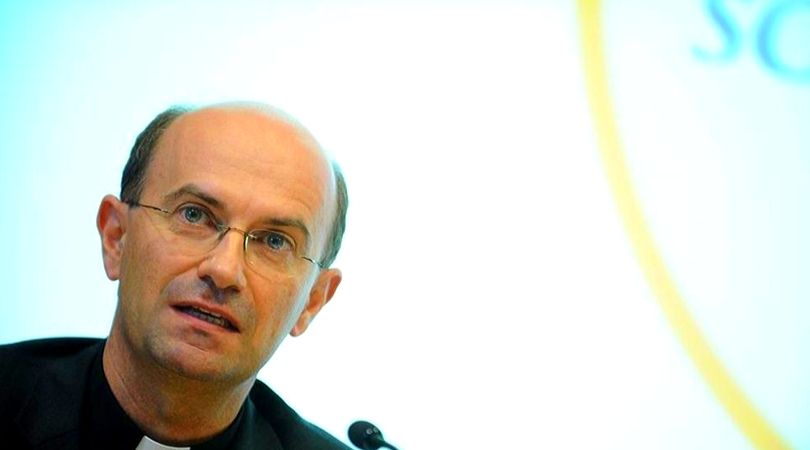