How Is the Church Cleansed?

With the looming possibility of a McCarrick crony replacing Cdl. Donald Wuerl as archbishop of Washington, D.C., it's becoming increasingly clear that either the Department of Justice (DOJ) will defeat the homosexual network infesting the Catholic hierarchy or it'll be by God's direct intervention.

Cardinal Wuerl's resignation as Washington's archbishop meant little as he remained the de facto head of the archdiocese as its apostolic administrator. Now, with the movement to Washington of Abp. Wilton Gregory, the product of Chicago's nefarious Cdl. Joseph Bernardin, it's seemingly self-evident that the homosexual network isn't giving itself up or going down without a fight.

That fight must now be spearheaded by the DOJ, which is able to investigate networks of criminal activity owing to the 1970 federal law called the Racketeer Influenced and Corrupt Organizations Act (RICO). This law gives the DOJ widespread power to investigate organized crime.

The network of gay or gay-friendly prelates commonly moved predator clerics to other dioceses that crossed state lines. This homomafia was also involved in money schemes involving untold millions that were moved not only across state lines but many times into foreign bank accounts as well. It's these loose strings that will allow the DOJ to extract priests, bishops and cardinals from the network.

If the DOJ isn't successful in cleaning out the homoclerical mafia from within the power structures of the Church, then it'll come down to divine intervention to finish the housecleaning. This was foretold by the Blessed Virgin Mary to a nun in Akita, Japan. Our Lady alluded to the network on Oct. 13 of 1973 by speaking of the division among bishops:

The work of the devil will infiltrate even into the Church in such a way that one will see cardinals opposing cardinals and bishops against other bishops. ... The Church will be full of those who accept compromises, and the devil will press many priests and consecrated souls to leave the service of the Lord.

She then described how the hard reset of the Church and society would occur if Church leadership or law enforcement weren't able to clean things up:

As I told you, if men do not repent and better themselves, the Father will inflict a terrible punishment on all humanity. It will be a punishment greater than the deluge, such as one will never have seen before. Fire will fall from the sky and will wipe out a great part of humanity, the good as well as the bad, sparing neither priests nor faithful. The survivors will find themselves so desolate that they will envy the dead. The only arms which will remain for you will be the Rosary and the Sign left by my Son.

Watch the panel discuss the need for the DOJ to launch a RICO investigation in The Download—McCarrick Crony to D.C.? 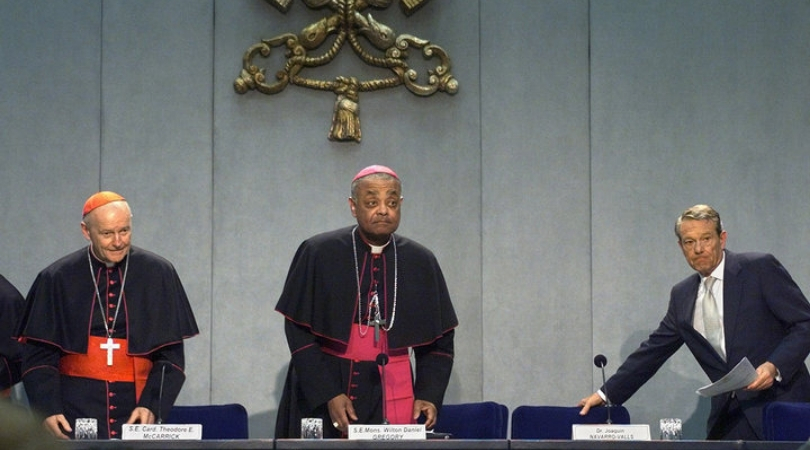