"The Purity, Viability, and Quality You Need"

Earlier this week, Americans across the country were outraged and disgusted to discover that abortion conglomerate Planned Parenthood has been illegally selling the organs of babies obtained during partial-birth abortions.

In an undercover investigative video released by LiveAction in association with the Center for Medical Progress, Planned Parenthood senior director of medical services, Dr. Deborah Nucatola, was shown discussing in her own, unedited words Planned Parenthood's operation of selling infant livers, hearts, lungs, and "lower extremities" at $30 to $100 "per specimen." While sipping a glass of wine and eating a fresh salad, Dr. Nucatola casually spoke on how little babies are carefully removed from their mothers' wombs using forceps and ultrasound so the organs extracted could be sold for profit, describing how she will "go above and below the thorax" so that she will be "very good at getting heart, lung, liver."

"I'm not gonna' crush that part; I'm going to basically crush below, I'm gonna' crush above, and I'm gonna see if I can get it all intact," she says while sipping wine and eating salad.

Though receiving little mention in the video released, which may possibly be further explored in future videos released by the Center for Medical Progress regarding this case — the results of a three-year long investigation — Planned Parenthood's hand in this nauseating maltreatment of human beings represents only the tip of the iceberg and has been the source of tremendous benefit for one company purchasing PP's baby parts and then selling them off to biomedical researchers for profit.

That company is StemExpress, and it describes itself as "a multi-million dollar company that supplies human blood, tissue products, primary cells and other clinical specimens to biomedical researchers." It also boasts of offering "the largest variety of raw material in the industry, as well as fresh, fixed and cryopreserved human primary cells."

On the company's site, which has been experiencing difficulty in recent days owing to high traffic, StemExpress openly states in bold print its "human tissue products range from fetal to adult" while guaranteeing that "every sample delivers the purity, viability and quality" the buyers look for.

Taking its cues from Amazon, StemExpress provides easy-to-use shopping carts complete with user-friendly dropdown boxes that allow the customer to purchase products like a "fetal liver" of their choice for as low $610. See screenshot: 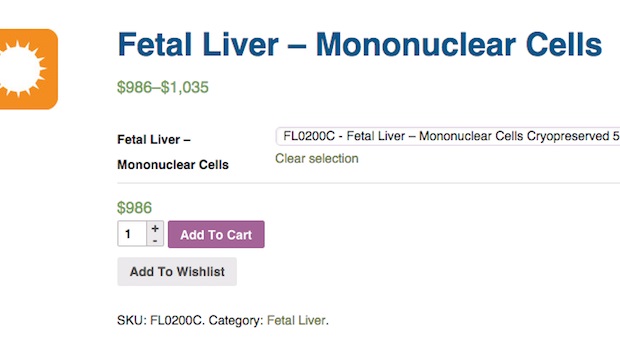 Umbilical cord blood gets offered for as low as $400.

All StemExpress buyers, proudly advertised on their site as places they've been "benefitting research at," have household names and span both coasts. Stanford University, UCLA, Yale, Harvard Medical School, Pfizer and Johns Hopkins University, among others, have all been buying fetal body parts from StemExpress and using them for "research."

Playing an obvious game of damage control, Planned Parenthood has since denied the selling of any fetal organs for profit, saying they only donate the body parts to science at a patient's request and charge only for transporation, nothing else. StemExpress, after receiving so much traffic its site crashed for 24 hours, immediately echoed Planned Parenthood's stance by stating on its site that it's just a "small life sciences company that supports leading research institutions to provide stem cells and other human tissue critical to medical research."

"StemExpress prides itself on complying with all laws," the statement says. "Written donor consent is required for any donation, including bone marrow, tissue of all types or blood."

However, according to David Daleiden of the Center for Medical Progress, Planned Parenthood has no reason to charge $30 to $100 "per specimen" based on transportation costs because StemExpress will typically be at the facility to "harvest the organs on order" without shipping them.

Furthermore, in a brochure directed specifically toward potential customers, StemExpress openly advertises that it seeks to provide "a financial benefit to your clinic" while contributing to its "fiscal growth." See screenshot: 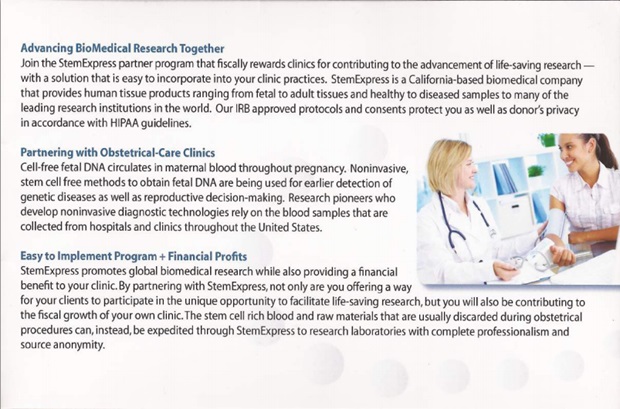 So why does StemExpress openly advertise this blatant violation of federal law? According to David Daleiden, just because "there is simply a lack of interest in enforcing this kind of law because of abortion," a problem he deemed "the Kermit Gosnell effect." In short, no one cares unless enough voices are raised in concern. Since the video's release, Congress has announced it will be launching an investigation into Planned Parenthood's operation to see if, in fact, they are guilty of breaking any federal laws.

Come Monday, ChurchMilitant.com will provide further investigation into the "organ harvesting" black market and how Planned Parenthood and StemExpress fit into the larger network.