Memphis Bishop Hits Back After Removal From Diocese

MEMPHIS, Tenn. (ChurchMilitant.com) - After Church Militant broke the news Tuesday that Pope Francis is removing Memphis, Tennessee Bishop Martin Holley from his diocese, Holley has since responded claiming the removal was owing to "revenge" by Cdl. Donald Wuerl. Sources claim, however, the narrative is not so simple.

Church Militant obtained the leaked contents of a confidential email sent to Holley from U.S. Papal Nuncio Abp. Christophe Pierre announcing, on behalf of Cdl. Marc Ouellet of the Congregation for Bishops, that the 63-year-old bishop was being "retired" effective 6 a.m. Rome time Friday, Oct. 26. Archbishop Joseph Kurtz of Louisville, Kentucky is being named apostolic administrator.

The early release of news forced the Vatican to issue a press release the next day announcing Holley's removal. Since then Holley has defended himself publicly, claiming that his removal was Wuerl's "revenge" for getting in the way of Wuerl's appointment in 2012 as Vatican Secretary of State.

Sources claim, however, the narrative is not so simple.

"I stood in his way for something he wanted," Holley said, who claims he had communicated to the Holy See important information he possessed pertaining to Wuerl when he was asked to weigh in on Wuerl's suitability for the job.

Sources from within the chancery of the diocese of Memphis claim the issue, however, is more complicated, and that his removal is largely connected to decisions made and bad counsel given by former Vicar General Msgr. Clement Machado, who resigned in July only days after an apostolic visitation.

According to chancery insiders, Machado, without any degree in canon law, ill-advised Holley to transfer almost two-thirds of all pastors in the diocese in violation of the canonical rights of all of the transferred pastors. Many of the pastors expressed open shock at the abrupt moves.

The violations were so palpable that pastors had to return to meet with Holley so that he could persuade them to tender their resignations voluntarily. Otherwise, the transfers would have remained invalid canonically. Not all pastors acquiesced, however. Father David Graham, pastor of St. Mary's in Jackson, filed a canonical challenge against his transfer.

In fairness to Holley, sources from inside the chancery report that the bishop was dealt a tough hand from the beginning of his tenure, when about eight pastors almost overnight had to leave office owing to retirement, illness or other reasons. In order to replace every pastor who left office, Holley had no choice but to move a host of pastors across the four corners of his diocese.

From the beginning of the bishop's tenure, two key opponents were Msgr. Peter Buchignani, P.A., former vicar general of the diocese, and Rev. Robert Marshall, pastor of the Cathedral of the Immaculate Conception. According to sources, both worked with other members of the "Old Boys Club" of the diocese to orchestrate the ousting of Holley — an African-American. Buchignani, sources report, was openly jealous that Machado, a Canadian of Indian background, had been appointed vicar general instead of him.

Sources assert that Marshall believed he and not Holley should have been made bishop. Despite "problems" that sources allege taint Marshall's record, Marshall could well be Vatican Secretary of State Pietro Parolin's choice for next bishop of Memphis.

Marshall could well be Vatican Secretary of State Pietro Parolin's choice for next bishop of Memphis.

Holley, despite it all, is said to have worked tirelessly in defense of minorities to break the Old Boys' network of priests — many of whom were notoriously homosexual — who felt entitled to specific parishes or offices.

As for Machado, a web search shows he was the subject of a 2016 advisory posted on the USCCB website at the request of the diocese of Corpus Christi regarding "numerous complaints" involving his conducting of exorcisms.

The advisory was taken down from the USCCB website after the USCCB and the diocese of Corpus Christi were notified that both of them were defaming Machado by incorrectly alleging that canon 1172 required Bp. Michael Mulvey's approval for Machado to perform exorcisms, despite the code of canon law not requiring that Machado receive Mulvey's approval to function as an exorcist outside his diocese.

The Corpus Christi diocese told Church Militant the advisory was no longer in effect after Machado incardinated into the Memphis diocese on Dec. 20, 2016 and Mulvey was no longer Machado's ordinary.

Some complaints, on the other hand, involved Machado's alleged pre-Memphis practice of collecting large donations to sustain his exorcism ministry. Some complained that he perpetrated financial fraud upon individuals and families.

Although Machado rejected allegations of any wrongdoing on these fronts, he resigned several days after a pope-appointed apostolic visitation in June led by Atlanta's Abp. Wilton Gregory and St. Paul-Minneapolis' Abp. Bernard Hebda. The diocese claimed at the time Machado's resignation was unrelated to the visitation and occurred in order for Machado to obtain his licentiate in canon law and care for his elderly mother.

Holly insists that "Machado is not and was not the problem," the bishop blaming his own removal on "racism" as well as spiritual "evil" at work in the diocese.

Holley also rejects charges that his removal was owing to a complaint of sexual predation. Journalist Rod Dreher reported Wednesday on a 2009 accusation made by ex-seminarian Peter Fuchs, a homosexual who detailed the gay predation he experienced at the hands of men in authority, including then-Deacon Holley:

I got to Theological College in Washington DC a few months later. It was a big relief. Life at TC was much freer. It was there that I started to have sex regularly. Theological College was just a very gay place, and anyone who tells you different is just lying. There were lots of couples. In my second year a guy who had previously attended TC came up for visit. His name was Marty Holley, a tall black guy. I met him in the refectory, and he asked me where my room was. A bit later he showed up. Though I had a bit of sexual experience by then I had not yet experienced the real predator type. Of course later in life I could spot them a mile away. But at twenty one Deacon Martin Holley caught me unawares . He used all the creepy predator tricks to get me to give in to him sexually. It was gross. Now he is a bishop here in DC. Gross, again.

Although Holley says he cannot comment on the situation directly, he insisted, "I am not a part of the lavender [mafia]. I would never belong to that evil."

He went on to deny any knowledge of Abp. Theodore McCarrick's sexual predation, even as he once served as his auxiliary bishop.

A number of Catholics have come to Holley's defense, claiming he was the target of clergy and laity unhappy with his attempt to rid the diocese of dissident priests. Father Joseph Jenkins, a priest in the archdiocese of Washington, D.C., wrote on his blog:

Bishop Holley is known to be a shepherd faithful to Church teaching and devotion. While centered on the Eucharist, he has personally witnessed to a deep devotion to the Blessed Mother and daily says his rosary. ... I cannot help but think that there has been a terrible misjudgment and injustice committed in his regard.

But Carol Tidwell, a parishioner in Memphis, claims "thousands" of angry Catholics wrote to the Vatican to complain about Holley's abrupt transfer of approximately 40 priests. "And they let the Diocese know they were upset by withholding their donations to the offering plate," she said in a comment. "Attendance also plummeted." 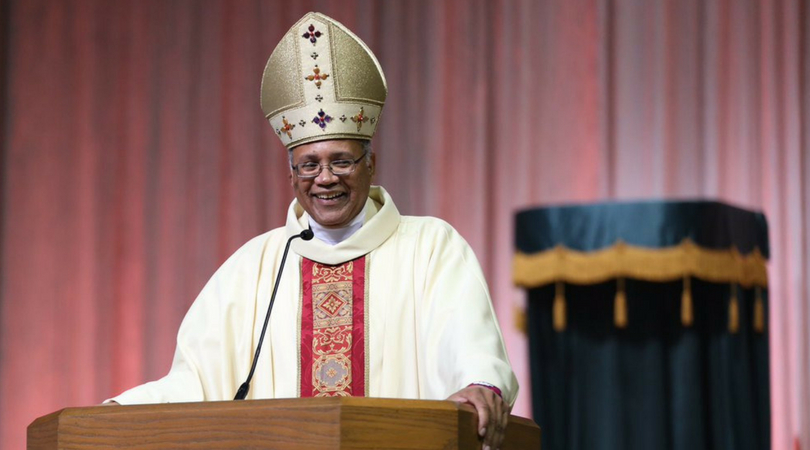