MEXICO CITY (ChurchMilitant.com) - Mexico's leftist leader is reiterating his 2019 call for Spain and the Vatican to apologize for colonialism.

In a Sept. 30 press conference, President Andrés Manuel López Obrador noted that in 2021, his nation will commemorate the 500th anniversary of the Spanish conquest of the Aztec Empire — which he described as an "invasion by Europe" — as well as the bicentennial of Mexico's independence from Spain.

As part of the commemoration, López Obrador said, "We are going to vindicate the communities, the native peoples," adding that a day will be set aside to "ask forgiveness for the abuses, for the atrocities that were committed during the colonial invasion."

The president made headlines in March 2019 when he called on Spain to apologize for its 16th-century conquest of Mexico's indigenous population. The move was met with derision from Spanish prime minister Pedro Sánchez.

Spain's foreign minister Josep Borrell, meanwhile, said it was "weird to receive now this request for an apology for events that occurred 500 years ago."

During the press conference, a journalist reminded López Obrador that Spain rebuffed his demand "with all firmness." The president replied, "We do not rule out that there is, on the part of the Spanish government, the monarchy, a change of attitude," adding that "thinking about reconciliation" need not be in vain.

"The case is the same for the request we have made to Pope Francis," he continued. "Just as the Catholic Church has vindicated native peoples, as it did in Bolivia, we are asking that they pronounce themselves in Mexico's case. And we consider that next year may be the moment, the opportune time."

López Obrador assured his audience there would be no diplomatic fallout should Spain or the Vatican fail to apologize. He also pledged that his own government would "offer an apology," as "the original communities suffered not only the conquest," but also "extermination, acts of injustice to deprive them of their lands, their waters."

The president vowed that repression, classism, racism, discrimination and dispossession would never again hinder Mexico, calling this idea "the essence of next year's commemoration."

López Obrador went on to say that he wants to show off Mexico's "cultural and artistic greatness" in 2021 while dispelling any notion that the Spanish conquistadores found a "backward, barbarous, savage people," saying that contention is used to "justify dispossession and atrocities."

The president said that although centuries have passed since the Spanish conquest, "the issue is still valid" and should be resolved "in harmony and peace" instead of covering it up.

He also pointed to recent events in the United States, noting that 2020 has seen vandals pulling down "statues of colonizers."

Conquistador Hernán Cortés and a small army of Spaniards landed in what is now Mexico in 1519, defeating the Aztecs at Tenochtitlan (the future Mexico City) by 1521, with the help of native allies from nearby Tlaxcala.

The conquest led to a great loss of life, not only by fire and sword, but also through the introduction of diseases to which the native people had no immunity. However, it also brought an end to human sacrifice, ritual cannibalism and the waging of war for the purpose of capturing sacrificial victims.

In the first century after the conquest, indigenous peoples suffered greatly while laboring in silver mines and on Spanish estates. However, the Church often raised its voice against abuses committed by Spanish officials and property owners. Dominican friar Bartolomé de las Casas, for example, decried the monstrous deeds committed by some, thus inspiring royal reforms and a recognition of the humanity of the native peoples.

Public works, baroque churches and governmental buildings of the period throughout New Spain give further testimony to the high culture of the time. Also, Juana Inés de la Cruz, a Hieronymite nun, was an author, poet and philosopher in Spanish and Nahuatl who is regarded as one of the most significant figures in Hispanic history.

Lurid tales of misdeeds by Spain and the Catholic Church — what became known as the Black Legend — arose during the Protestant Revolt. The accounts served the interests of Protestant nations like England, France and the Netherlands by helping to discredit Catholic Spain, even as these same Protestant nations were themselves unleashing conquests in the New World. In later years, liberals, leftists, progressives, socialists and communists would revive the Black Legend for their own purposes.

Cuban philologist Roberto Fernández Retamar wrote that while Spain did commit "monstrous crimes" during its period of empire, "when compared with others committed in following centuries, they were no more monstrous than those of the metropolitan powers that followed the Spanish imperial example, sowing death and destruction throughout the world."

He wrote that those powers lacked "scrupulous men like Bartolomé de Las Casas, who championed Indian rights, and such debates about the legitimacy of the conquest as the one launched by the Dominicans, which shook the Spanish Empire."

Fernandez Retamar quoted archaeologist Laurette Séjourné, who wrote that systemic condemnation of Spain is pernicious because "Colonialism is the mortal sin of the whole of Europe."

"No other nation would have behaved better," Séjourné said. "On the contrary, Spain boasts one important distinction here: It is the only country to date in which powerful voices were raised against the act of imperial conquest."

In an address during his 1987 visit to the United States, Pope John Paul II described the encounter of indigenous Americans and Europeans as "an event of such significance and change that it profoundly influences your collective life even today."

"That encounter was a harsh and painful reality for your peoples," the pontiff continued. "The cultural oppression, the injustices, the disruption of your life and of your traditional societies must be acknowledged."

He added that missionaries shared the gospel and its teachings that all people are equal before God, thus defending "the rights of the original inhabitants of this land." Among these was St. Junípero Serra, who established missions in California.

I humbly ask forgiveness, not only for the offenses of the Church Herself, but also for crimes committed against the native peoples.

In 2015, Pope Francis said in Bolivia: "I say this to you with regret: Many grave sins were committed against the native peoples of America in the name of God. My predecessors acknowledged this ... I too wish to say it."

Acknowledging that sins were committed during the conquest and afterwards, Francis continued:

I would also say, and here I wish to be quite clear, as was St. John Paul II: I humbly ask forgiveness, not only for the offenses of the Church Herself, but also for crimes committed against the native peoples during the so-called conquest of America. So for this, we ask forgiveness, I ask forgiveness. But here also, where there was sin — great sin — grace abounded through the men and women who defended the rights of indigenous peoples.

Not long after López Obrador's March 2019 demand for an apology, Vatican spokesman Alessandro Gisotti said that the pope had already expressed himself on the issue.

History also records that Spain and Mexico signed the "Definitive Treaty of Peace and Friendship between the Mexican Republic and SMC the Queen Governor of Spain" in 1836 to "forget forever the past differences and dissensions, for which, unfortunately, relations of friendship and good harmony between both peoples have been interrupted for so long."

Mexico's government has long had troubled relations with the Catholic Church. Authorities seized much of the Church's property in the 1800s, and in the aftermath of the 1910 Revolution, they hunted down and killed priests while seeking to restrict the Church and impose atheism. 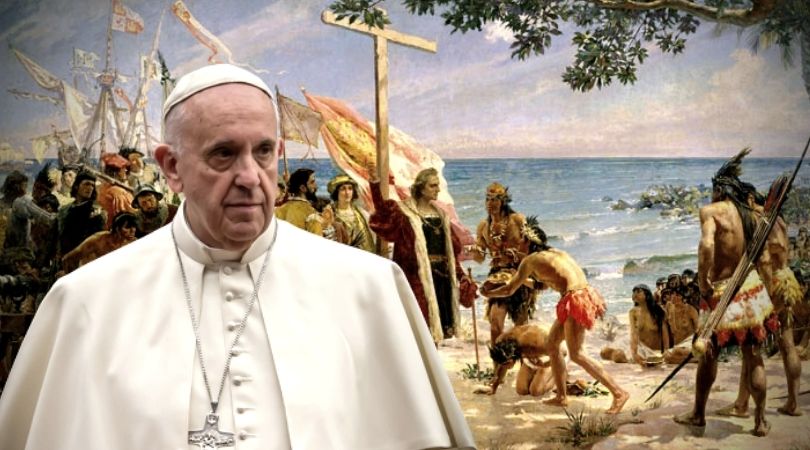