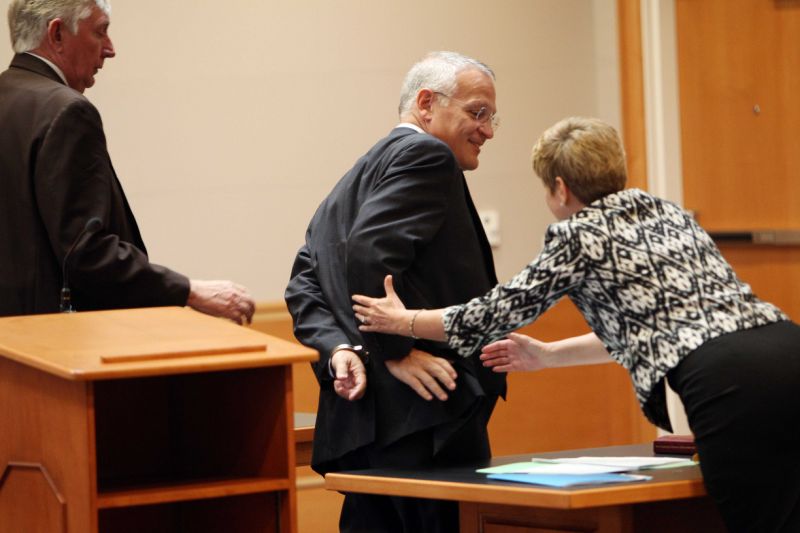 CONCORD, N.H. (Church Militant.com) - A high-ranking priest in New Hampshire has been stripped of his priestly faculties and imprisoned over an embezzlement scandal involving his gay lovers.

The diocese of Manchester made the announcement Friday about Edward J. Arsenault III, whose faculties were removed by the Vatican on February 28. The former monsignor is under house arrest for a 2014 conviction for embezzling funds to support his homosexual partners.

Arsenault pled guilty to all charges, including writing checks to himself and his brother amounting to $23,000 from the estate of Msgr. John Molan. He also billed the diocese $184,000 for lavish meals, cell phones and computer equipment while he was an aide to Bp. John B. McCormack working in a number of positions in the diocese from 1999 until 2009.

Bishop McCormack came under intense criticism in 2003 when the diocese exploded with a sex abuse scandal involving 83 victims. Arsenault was media spokesman at the time, serving as the public face of the diocese, and working with police and the press. A high-ranking monsignor, he was considered the bishop's right-hand man.

He served in this function until 2009, when he left to head St. Luke's Institute, the notorious treatment facility for clergy and religious battling drug or alcohol addiction as well as sexual misconduct. As the CEO of the institute, he was making $170,000 a year, but continued taking money from a Catholic hospital in Manchester by claiming $104,000 in consulting fees until March 2010.

Saint Luke's has a history of scandal and clashes with the Vatican. Founded in 1981 by openly gay Fr. Michael Peterson, who later died of AIDS, Peterson implemented the theories of Fred Berlin and John Money — two men who were directly influenced by the philosophy of homosexual, pedophile-enabler Alfred C. Kinsey.

Money was notorious for his support of pedophilia and his involvement in the David Reimer case, where he asserted the "theory of gender neutrality." These theories were used on priests coming to the institute, and involved showing priests pornography while measuring their level of arousal.

Priests accused of sexual improprieties — whether the allegations are credible or not — are often sent to St. Luke's or similar treatment facilities for counseling. Some priests refused to comply with their treatments, calling them sinful, while others found them humiliating. At least three priests committed suicide at St. Luke's.

The questionable techniques were brought to light during the case of Anthony Cipolla, defrocked by Cdl. Donald Wuerl after refusing to undergo treatments and assessments by St. Luke's and later St. John Vianney Center on the grounds that they "derided his faith."

Cipolla appealed his laicization to the Vatican, and the Vatican ruled in Cipolla's favor — although Wuerl defied the order to re-instate the priest.

An article in the Pittsburgh Post-Gazette from March 21, 1993 claims to have obtained a copy of the Vatican's secret seven-page segnatura that reads: "St. Luke's Institute is a clinic founded by a priest who is openly homosexual and based on a mixed doctrine of Freudian pan-sexualism and behaviorism, is surely not a suitable institution apt to judge rightly about the beliefs and the lifestyle of a Catholic priest."

St. Luke's Institute is a clinic founded by a priest who is openly homosexual and based on a mixed doctrine of Freudian pan-sexualism and behaviorism.

Saint Luke's recently awarded Cd. Wuerl with its 2016 St. Luke award, characterizing him as "an individual whose professional life or charitable works embody the mission of the organization."

Investigations into St. Luke's operations after the arrest did not find any indications of theft, and the institute denied any connection to the former CEO's wrongdoings.

Arsenault has been ordered to make full restitution for his embezzled funds and is up for probation in 2018, but may face an additional two years from a deferred sentence.