More Questions Surfacing About Checchio as Rector of NAC

Seminarian endorsed for priesthood was best man at gay 'wedding'

ROME (ChurchMilitant.com) - Church Militant reported on Nov. 6 that Bp. James Checchio of the diocese of Metuchen, New Jersey maintained an elite group of seminarian friends when rector of the Pontifical North American College (NAC), and that one, Michael Cassabon, left the priesthood and entered a so-called same-sex marriage. Another one of Checchio's elite seminarian friends, who is now a pastor on Long Island, was the best man at Cassabon's wedding.

Father Gregory Rannazzisi, the current pastor of St. Gerard Majella Catholic Church in Port Jefferson Station, New York, in the diocese of Rockville Centre, was a classmate and friend of Cassabon at NAC.

While a priest, he attended Cassabon's same-sex wedding as the best man on Sept. 9, 2016.

Church Militant spoke with priests and former seminarians who requested to remain anonymous and who attended NAC when Checchio was rector to verify information regarding Checchio's elite group of seminarian friends at the time.

"At the North American College, it was evident that the then-rector, Msgr. James Checchio, affiliated himself with an elite group of seminarians, who were treated with great benignity by the faculty," one priest told Church Militant. "These enjoyed special privileges and treatment, and even drank together."

He also verified that Rannazzisi was one of Checchio's elite friends at NAC.

A priest standing as an official witness at such an event is gravely scandalous and objectively immoral.

Church Militant reached out to Rannazzisi multiple times to inquire as to whether his bishop and parishioners knew of his participation in the event, as well as how he reconciles being a Catholic priest with attending a ceremony that directly contradicts the teachings of the Catholic Church on marriage.

No response was received as of press time.

One priest, who was at NAC around the same time as Cassabon and Rannazzisi, and who is aware of Rannazzisi's participation in Cassabon's so-called same-sex marriage, told Church Militant: "A priest standing as an official witness at such an event is gravely scandalous and objectively immoral. In doing so, a priest is effectively supporting a travesty of the natural law and bearing false witness to the Gospel of Christ, which he pledged to uphold in its integrity."

As bishop of Metuchen, Checchio has been involved in supporting a pro-LGBT group and inviting well-known LGBT advocate Fr. James Martin to his private residence.

Many Catholics under Checchio's care called, wrote and requested meetings with the bishop regarding the pro-LGBT group and the pro-gay Jesuit, who has spoken in the diocese. He refused to meet with any of them. In most cases, he did not respond to their concerns or gave elusive replies that did not address the severity of the concerns — a decision critics considered especially odd since Checchio granted a private audience to Martin, who is not under his care, prior to one of Martin's talks in the diocese.

At the North American College, it was evident that the then-rector, Msgr. James Checchio, affiliated himself with an elite group of seminarians.

Martin expressed his gratitude to Checchio for the meeting on Twitter: "Thanks to everyone who packed the room for a lecture on Jesus last night, which was moved after angry protests from hateful online groups," he said. "Thanks also Bishop Checchio for meeting with me before the talk."

Checchio also supports a pro-LGBT group in his diocese called In God's Image (IGI). An attendee of the group's meeting on Sept. 11 who goes by the name "Tina" confirmed with Church Militant that David Harvie, a man in a so-called same-sex marriage, was greeting people at the door while his "husband" mingled with others.

"They tried to bury us. They forgot we were seeds." Thanks to everyone who packed the room for a lecture on Jesus last night, which was moved after angry protests from hateful online groups. Thanks also Bishop Checchio for meeting with me before the talk. https://t.co/HOqQD6lJCr pic.twitter.com/v2SgpZKNLl

Tina also reported that IGI, which is hosted at the Church of the Sacred Heart, does not affirm Church teaching on LGBT topic, nor does it talk about chastity.

She said the pastor of Sacred Heart made it abundantly clear to the group that Checchio is fully supportive of IGI, knowing about Harvie's involvement and the nature of the group.

According to canon law (specifically, canon III.8.7(b)(2)), the rector of a major seminary must endorse a seminarian deacon for priestly ordination.

The Vatican has also clarified that men with deep-seated homosexual tendencies should not be ordained to the priesthood.

The Vatican's Congregation for Catholic Education provided guidance in 2005 that the Church "cannot admit to the seminary or to holy orders those who practice homosexuality, present deep-seated homosexual tendencies or support the so-called 'gay culture.''"

In spite of these guidelines, Checchio endorsed Rannazzisi, who was apparently another one of his "elite friends" at NAC, for the priesthood.

Rannazzisi remains a pastor on Long Island, but it is unclear if he is still in contact with Checchio. 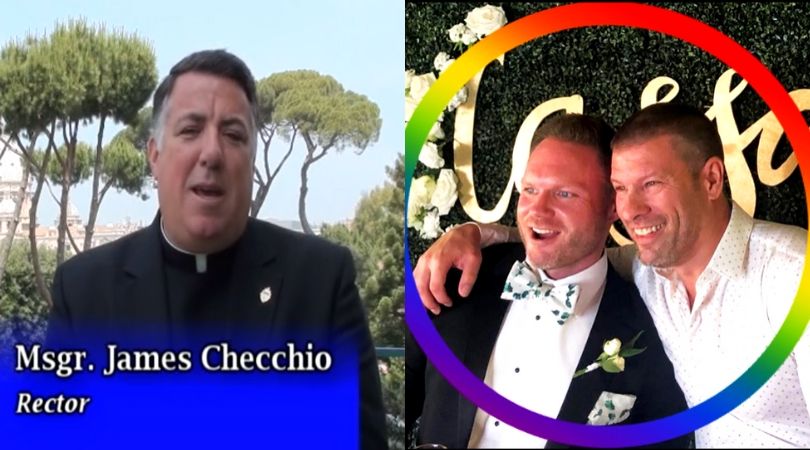