MUNICH (ChurchMilitant.com) - Catholics protesting in Munich are accusing the German Bishops' Conference of deploying their multi-billion-euro income from the state-imposed "Church tax" to subvert traditional Catholicism in Germany and across the globe.

At a silent prayer rally in the center of the Bavarian city on Saturday, an international coalition of more than 130 prominent lay Catholics called on the German bishops to end the "dissimulation and deception" being introduced into the worldwide Catholic Church by the Trojan horse of the so-called "synodal path."

Critics say the two-year German "synodal path," which began on Dec. 1, continues the theological trajectory of the Amazon Synod and is set to create a "new church" that deviates from Catholic teaching on celibacy, contraception, homosexuality and fornication.

Austrian Catholic activist Alexander Tschugguel — who threw the Pachamama idols in the Tiber during the Amazon Synod and participated in the Munich rally — confirmed to Church Militant that "the introduction of the synodal path would probably mean that this process will proceed very quickly in Germany."

The Holy Father is not ignorant of the positions of the German bishops, nor of their objective, which is to extend the 'binding' decisions of their 'permanent synod' to the universal Church.

"The German Church is trying to take on a kind of pioneering role here," he told Church Militant. "A closer look at these developments makes it obvious that the alleged problems in the Amazon region are only a pretext. The demands for abolishing celibacy and ordaining women have been heard in Germany for many decades, much more so here than in the Amazon region itself, where — as local surveys there have shown — most people actually find them incomprehensible."

In his first public appearance since going into hiding over a year ago, Abp. Carlo Maria Viganò joined other high-profile Catholics on Saturday calling for "clarity from Pope Francis" and demanding that the pontiff "have the courage to openly say" whether "he holds the same doctrinal deviations" as the German bishops.

In a statement, the coalition urged German Catholics to "contribute to this process of clarification by refusing to pay the Church tax which is theologically, canonically and morally reprehensible, and which provides the financial base necessary to fund the realization of the synodal path."

Cardinal Reinhard Marx, president of the German Bishops' Conference, and his fellow bishops have been accused of using the multi-billion-euro income from the Church tax to finance the Amazon Synod and its agenda.

Not paying the Church tax does not mean "turning your back on the Church or denying faith: on the contrary! Not paying means keeping and defending the Faith!" the organizers affirmed.

"The church in Germany is rich in funds but poor and poorer in spiritual substance. In the eyes of an avowed Catholic, it appears as a bureaucratic functional apparatus that willingly submits to public opinion and the dictates of civil authorities," they said.

The "end result of the synodal path can only be the constitution of a church separate from Rome," the press statement warned, asking "the German Bishops to be just as coherent and to follow the synodal path to its logical end-point, which is the constitution of a new church with a German-Amazonian face, separate from the Catholic, Apostolic, Roman Church."

The Holy Father is "not ignorant of the positions of the German bishops," the organizers asserted, "nor of their objective, which is to extend the 'binding' decisions of their 'permanent synod' to the universal Church."

The German church tax, or Kirchensteuer, which is a mandatory tithe of up to 9% collected by the state on behalf of the Church, has brought in over $6.5 billion in net revenue each year since 2016, according to the bishops' 2019 annual report.

German bishops have previously warned Catholics that they could face excommunication or exclusion from the sacrament if they fail to pay taxes. At the same time, heretics and schismatics — including priests and bishops — are not punished, faithful Catholics complain.

"The German Church is very influential because of its financial might," Jesuit spokesman Fr. Godehard Brüntrup earlier admitted.

Meanwhile, the organizers of the Munich rally are warning that paying the Church tax would mean "participating directly in the advancing secularization of the Church in Germany," and supporting the "ideological pressure and the financial power of the German bishops worldwide." They state:

This is the hour of clarity and coherence and we ask for the end of the dissimulation and deception. We ask for this with the Rosary in our hands, in a city in which, in 1609, a Holy League was formed among the German Catholic states for the defense of the Faith. Four hundred years ago, at the Battle of the White Mountain on Nov. 8, 1620, the united forces of the Holy Roman Empire and the Catholic League, led by Duke Maximilan of Bavaria, constituted an Acies Ordinata that fought and defeated the enemy army with the cry of "Holy Mary!"

The resistance movement is being dubbed Acies Ordinata — from the Latin of the Song of Solomon (6:3, 9) and rendered as "army with banners" or "army in array."

The verse from the canticle has been applied to the Blessed Virgin Mary in Catholic devotion; in prayer, its recitation is often followed by the Magnificat: "Who is she that cometh forth as the morning rising, fair as the moon, bright as the sun, terrible as an army set in array?"

Two other Acies Ordinata demonstrations were held last year — one ahead of the Vatican Summit on Clerical Sexual Abuse and the other before the Amazon Synod. Church Militant took part in the Rome gathering.

Cardinal Rainer Woelki, whose Cologne archdiocese is one of the world's wealthiest, has warned fellow bishops against creating a Protestant-like "German national Church," distinct from the Catholic "universal Church."

"I do not want to support a special 'German Path,' nor should we as Germans pretend to know better than the rest of the Church," Woelki said in an interview in November 2019. 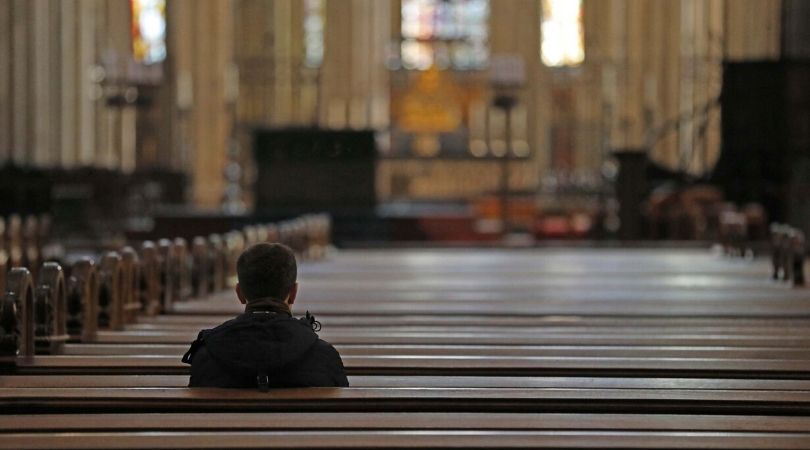