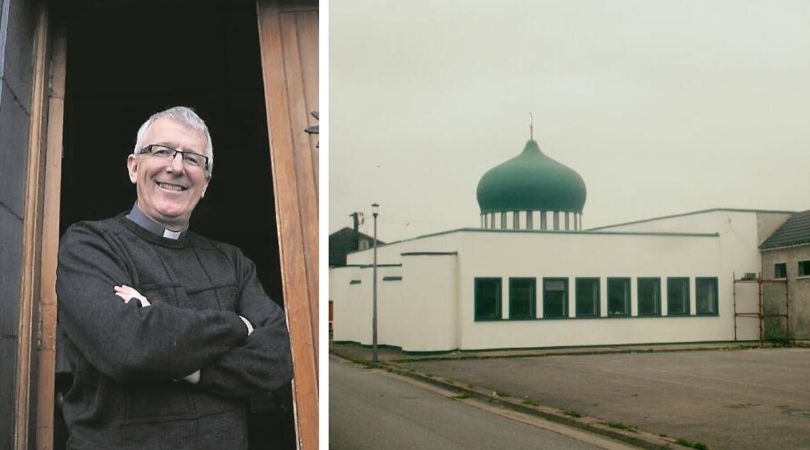 Irish Fr. Stephen Farragher invites Muslims to his altar to pray to Allah

COUNTY MAYO, Ireland (ChurchMilitant.com) Muslims, invited by a Catholic priest in Ireland to pray alongside him during the celebration of the Holy Eucharist, prayed the Adhan — the Islamic call to prayer that categorically proclaims Islam's supremacy over its forebears — Judaism and Christianity.

Father Stephen Farragher, parish priest of St. Patrick's Church in Ballyhaunis, County Mayo, invited two Muslims to "pray in solidarity" with him "the final blessing and prayer" at the 10 a.m. Friday Mass to be broadcast on radio, Midwest Radio Ireland reported.

As Catholics in Ireland remain locked out of their churches on the eve of Holy Week @tuamarchdiocese decide to allow Muslims to hold Friday prayer on the altar alongside a priest #CatholicTwitter pic.twitter.com/dCN1USiB2H

Mohammed Cherbatji and Mohammed Rahmani joined Fr. Farragher to seek a blessing on all frontline health care workers and frontline workers during the pandemic and pray for the eradication of the Wuhan virus. The church was reportedly empty because of the Wuhan virus restrictions.

However, a video of the Islamic prayer released on Twitter showed one of the Muslims in the pulpit cantillating the Adhan in Arabic.

In a religious narrative where one religion denigrates another, compromise is not logically or theologically available.

Church Militant contacted an Arabic expert and scholar in Islamic jurisprudence who confirmed that the prayer was not a blessing for health care workers but the "Islamic call to prayer, which conclusively and unambiguously asserts that God's revelation to Muhammad has supplanted and superseded God's prior revelations to Moses in the Old Testament and to Jesus in the New Testament."

Theologian Dr. Gavin Ashenden, who resigned his position as Chaplain to the Queen in protest against a reading from the Koran at St. Mary's Cathedral in Glasgow, Scotland, confirmed to Church Militant that "the Muslim call to prayer is a dramatic piece of Islamic triumphalism."

"It proclaims Islam's superiority over all other religions, and in so doing casts Jesus in the role of a charlatan and a liar. The Muslim god, Allah, is unknowable and has no son. Jesus was, therefore, a fraud in claiming He and the Father are one," Ashenden, who recently converted to Catholicism, said.

"In a religious narrative where one religion denigrates another, compromise is not logically or theologically available," he stressed.

Ashenden explained how Fr. Farragher, having invited a Muslim to end his broadcast-Mass with the Adhan prayed from the Catholic pulpit, "so far from creating a congenial interfaith event for the online world, he had given a platform to an alien prayer that invalidated the Mass, his Saviour, the authenticity of the Gospels and the legitimacy of the whole Catholic Church."

No doubt he sought to be imaginatively generous. But his profound ignorance will have caused the deepest offense to all literate and faithful Christians as well as the profoundest grief to those growing scores of thousands of Christians who suffer around the world at the hands of a brutalising Islam that makes them pay the price of loving and believing in Jesus, Son of God and Saviour, with their lives.

Former Swedish Imam Tomas Samuel explains how the Adhan is a statement of Islamic supremacy. In Islamic sources, "we discover that the prayer call states that everyone should submit to Islam and proclaims power over the area of the ​​prayer."

The Adhan is prayed for two reasons: "It will remind people of when it is time to pray, and the prayer call will proclaim Islam over a city," he explains.

Samuel quotes Omdat Al-Ahkam, a fundamental text for Islamic law: "One can liken the Adhan to the Muslim flag. Its proclamation shows that the people of the city are Muslims."

It proclaims Islam's superiority over all other religions, and in so doing casts Jesus in the role of a charlatan and a liar.

In Arabic, "adhan" means "information" or "enlightenment" — signifying that people previously in darkness and ignorance are now "informed" and "enlightened" about the "true religion" of Islam, to which they must submit. Islam means submission (from the Arabic root "al-Silm" — submission or surrender).

Commentators have explained how reciting the Adhan in churches is a "power play" intended to conquer and sacralize Christian territory. Islamic scholars are engaged in an in-house discussion on whether it is haram (forbidden) or makrooh (offensive) for Muslims to enter churches.

"If your going to the church is just to show tolerance and lenience, then it is not permissible, but if it is done to call them to Islam and create opportunities for you to do so, and you will not be taking part in their worship and you are not afraid that you may be influenced by their beliefs or customs, then it is permissible," declares the Fatwa al-Lajnah al-Daa'imah.

Friday prayers at Ballyhaunis mosque (pictured in this article) have been canceled as a result of the virus. Over 500 Muslims attend Friday prayers regularly at the mosque — the oldest purpose-built mosque in Ireland.

Islam is poised to become Ireland's second-largest religion in the next 10 years. Ballyhaunis is Ireland's most diverse town, according to the 2011 national census, and only 40% are of Irish origin while 60% are immigrants — a significant portion of whom are Muslim.

Church Militant contacted Fr. Farragher and asked him if he was aware of the implications of the Islamic prayer. We also inquired if Pope Francis' Abu Dhabi declaration had inspired him to indulge in this act of combined Muslim-Catholic worship — but received no response as of press time.