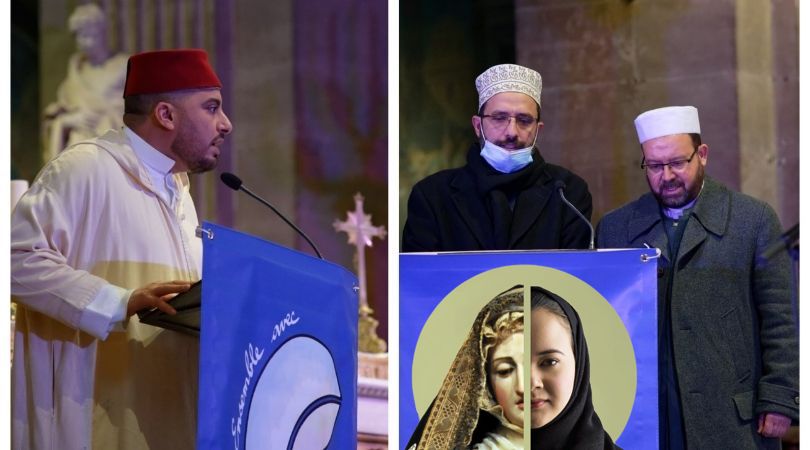 PARIS (ChurchMilitant.com) - A respected Islamic scholar and Parisian Catholic priest is condemning the recitation of the Koran and Muslim prayer in Paris' largest church as the "abandonment of evangelization" and the "introduction of the Antichrist."

Father Guy Pagès' censure is being echoed by Parisian Muslim converts, who face the death penalty for apostasy from Islam — including a former high-ranking Islamic jurist who confessed to engaging in interfaith events "only to sanitize the true face of Islam in preparation for jihad."

Catholics were shocked by the Muslim–Catholic celebration hosted by Saint-Sulpice's church on Sunday to mark the International Day of Human Fraternity following the interfaith concordat between Pope Francis and Grand Imam Ahmed al-Tayyeb in 2019.

The indignation has been fanned by the sacrilegious syncretism of the Immaculate Virgin Mary with the Koran's Maryam bint Imran who, according to Islamic historian Raymond Ibrahim, is portrayed in Islam as "'married' to and 'copulating' with Muhammad in paradise."

Two Muslim imams recited "Surah Al-Fatiha," the first chapter of the Koran, from a lectern in front of Saint-Sulpice's high altar, while a Muslim woman wearing a hijab chanted verses from "Sura Maryam" — the koranic chapter named after the Islamic Mary.

To introduce Islam into a place consecrated to the exclusive worship of God is to introduce the Antichrist.

The interreligious event, organized by Saint-Sulpice parish priest Fr. Henri de La Hougue, was promoted under the banner "Together With Mary," bringing together around 800 participants and 30 associations "committed to dialogue and action for fraternity."

"To officially introduce Islam into a place consecrated to the exclusive worship of God is, according to the Catholic faith — Dei Verbum, §4 — to introduce the Antichrist there," Fr. Guy Pagès, abbot and author of Interrogare L'Islam ("Questioning Islam"), told Church Militant.

Abbé Pagès cited several biblical and koranic texts explaining his position, including 1 John 2:22, which defines the Antichrist as "the liar" who "denies that Jesus is the Christ." Islam rejects Jesus as the divine Messiah and demotes Him to the category of a prophet.

"It is with such pastoral care that the Apostles succeeded in evangelizing the world. By abandoning it, are we sure to do better than them?" the abbot asked.

Surah Maryam openly contradicts the doctrine of the incarnation.

At shrines, the means of salvation are to be supplied more abundantly to the faithful by the diligent proclamation of the word of God, the suitable promotion of liturgical life especially through the celebration of the Eucharist and of penance and the cultivation of approved forms of popular piety.

"Now, is the Koran the word of God and Islam a means of salvation?" queried Pagès, who is responsible for the conversion of over 200 Muslims and has served as a missionary to Muslims in the Islamic Republic of Djibouti.

In an earlier interview, Abbé Pagès lamented the acquiescence of the hierarchy to Islam:

Our pope is even able to write that "true Islam and a correct interpretation of the Koran are against all violence" (Evangelii Gaudium, §253). The blindness is such that instead of training Christians to evangelize Muslims, they are pushed to welcome Islam into their churches!

Church Militant asked a former Shariah scholar to tease out the implications of reciting Surah Al-Fatiha in a church.

The jurist, who faces the death penalty for converting to Christianity, cited the commentary on verse 7 of the surah from Tafsir al-Jalalayn, explaining that the surah pronounces a curse on Jews and Christians for rejecting Islam and following a false religion.

Allah will wed me in paradise to Mary, daughter of Imran.

"How dialogical is it for Muslims to brazenly walk up to a lectern in a Catholic church (with the blessing of the parish priest) and then curse Catholics and tell them they will go to Hell because they have rejected Allah and his 'prophet' Muhammad?" the scholar asked.

The jurist also clarified how the Muslim Mary in Surah Maryam is called the "sister of Aaron" (19:28) — a discrepancy noted by the Christians of Najran during the time of Muhammad. He noted, "Surah Maryam openly contradicts the doctrine of the Incarnation by stating, in verse 35, 'It is not befitting to Allah that he should beget a son.'"

Islamic historian Raymond Ibrahim told Church Militant that dialogue based on Mary "is yet another attempt to try to convince Catholics that Islam is similar to their Faith when, in fact, Islam appropriates the names and sacred auras of biblical figures but then recasts them with completely different attributes — ones that reaffirm Islam as the 'true' faith."

In an article for Frontpage Magazine titled "Muhammad and the Virgin Mary: A Match Made in Heaven?" Ibrahim cited a hadith (Islamic canonical tradition) wherein Muhammad, the prophet of Islam, declared that "Allah will wed me in paradise to Mary, daughter of Imran."

Church Militant spoke to a high-ranking Parisian mufti who, before his conversion to Christianity, regularly practiced dialogue with Catholics, Orthodox, Protestants and Jews in Paris. The mufti, who requested anonymity because of death threats, explained how the "whole interfaith game was part of the Islamic strategy of taqiyya or 'deception.'"

Our pope is even able to write that 'true Islam and a correct interpretation of the Koran are against all violence.'

If you see the teeth of the lion, don't think the lion is smiling at you. As Muslims pretending to engage in interfaith dialogue, we are more dangerous than lions — but the foolish Catholic leaders love our teeth. Ask them if Muslims will allow Catholics to enter a mosque and read the Bible out loud! It is always a one-way street.

I was part of this farce for decades. I had nothing but contempt for these Christian and Jewish religious leaders who wanted to be nice to Muslims. I had no intention of converting them to Islam. The goal of my deception was to sanitize this violent history of Islam and its current violent image so I could make inroads into French society and clear the way for an Islamic takeover of France.

The mufti said he would even condemn jihadists as those who present a "false interpretation of Islam" in order to present himself as a moderate.

Meanwhile, a female convert from Islam, who identified herself as Marie-Lou, has issued an online petition against a prayer room dedicated to Muslim prayer at Saint-Sulpice.

The parish priest has rejected the claim that such a prayer room exists and, stung by growing online criticism of the event, has issued a defense of Saint-Sulpice's interfaith day.

Fr. Henri de La Hougue and the archbishop of Paris' office did not respond to Church Militant's request for comment.

Saint-Sulpice is second is size only to Paris' Notre-Dame Cathedral. The church shot to popularity after it was featured in a scene in Dan Brown's The Da Vinci Code.