On the state of the Church in Belgium

My name is Erwin and I'm a Dutch Catholic living in Flanders (the Dutch-speaking northern half of Belgium). I'm on the board of a Flemish Catholic organization called Pro Familia. We organized a small pro-life march in the center of Antwerp promoting the traditional family of a man, a woman and children and against abortion. Because of that, we were scandalized in the Belgian Church and in both private and state-owned national media. Questions in the national Belgian Parliament were raised.

The board of Pro Familia consists of myself, our chairman Dries, Rien, Robin and Johanna. As friends and Catholics we came together and discussed what is wrong with the Belgian Church and Catholicism in our part of Europe. We came up with some really disturbing answers. I do not know the level of media coverage the crisis in the Belgian Church receives in the English-speaking world, but here, the insane are running the asylum. Talking about everything wrong is something I cannot do here to its full extent, but I think I can quickly paint a general picture. 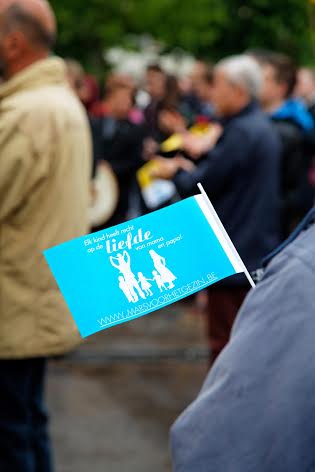 In medieval times the Flemish and Dutch Catholics were among the very best Catholics, with Flanders in particular described as the "garden of Mary." Now they are quite the opposite. Within the wider context of left-liberal Catholicism in Europe, Belgium is ground zero for that ideology. Internationally, the best known of these ranks is the bishop who abused his own nephew, Bp. Roger Vangheluwe. Vangheluwe was chairman of the seminary of Brugge (a city better known by its French name "Bruges"). This is an important fact, because Vangheluwe educated a large portion of the people now in power in the Belgian hierarchy. Vangheluwe personally made a man named Johan Bonny professor at that seminary. This man, very close to Vangheluwe, was created bishop of Antwerp by Pope Benedict XVI. Today, Bp. Bonny is best known as being one of the leading pro-gay voices inside our Church. And it is very likely that Bonny will be the next archbishop of Mechelen.

There is much more to say about this, but that is a topic in itself. Other problems of the Church in Belgium are, among other things, that the state has a say in the teachings of the Church. This is because the wages of the priests are paid by the State, not by Catholics themselves.

Within this context, being the most radical left-liberal Catholic country within the left-liberal Catholicism of Europe, we set out to promote a basic Catholic value called "family," with a father, a mother and children — nothing more, nothing less. So we requested permission to put on a legal demonstration in the second-biggest city of Belgium, Antwerp, and printed 20,000 leaflets promoting our demonstration. We took a real grassroots approach because we knew then, and we know now, it would be difficult getting people to our demonstration. The five of us distributed the leaflets ourselves at various occasions during the period between January and up until May 16.

We drew the attention of the national media for the first time last January. When former member of the Pro Familia board Mattheu wrote an article against the pro-gay line of Bp. Bonny with the title "Monseigneur Bonny, wilt u alle homo's naar de hel?" (Bp. Bonny, Do You Wish All Gays to Go to Hell?), national media, including De Standaard, Het Laatste Nieuws and De Morgen, covered the story. The argument Mattheu made was that if Bonny continues to approve of homosexuality, gays are being confirmed in their sin and their fate will be Hell. Because of that, basically all Hell broke loose in the media. Mattheu left the board of Pro Familia soon after because, in his opinion, we were not radically anti-Bonny enough. Our main aim, however, is promoting Catholic family life, not bashing Bp. Bonny.

After that, our chairman Dries did an interview in a national Flemish publication called 't Pallieterke, and discussed our upcoming demonstration. In response to that interview the liberal French-Belgian newspaper La Libre Belgique ("Free Belgium") mentioned us as an anti-Bonny force, citing Dries, among other things. 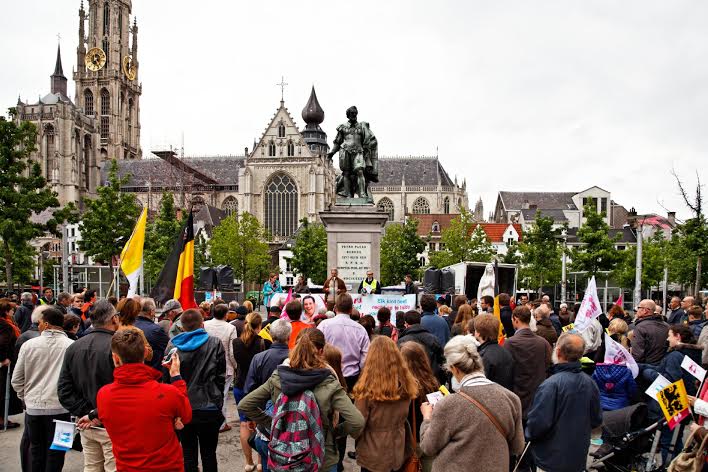 May 16, 2015
Our demonstration took place on May 16. That was the same day the Gay Pride parade took place in Brussels; our demonstartion was meant to be a counterweight to its perversity.

Our demonstration went smoothly. We had a couple of Polish friends attending. Later, they got arrested because they held their anti-abortion banners up and ignored the subsequent warnings of the police.

In the end we drew a crowd of about 250–300 people, while the Gay Pride event drew a crowd of 80,000. But we knew that in advance. Everything has a small start. Even the gay lobby started with demonstrations with only hundreds of people attending, so we must not be afraid to be small and marginal in the very beginning.

At the end of the demonstration we offered speeches promoting good family life. A lesbian couple started kissing in front of the crowd and were (like the Polish) arrested and carried off by the police (all European countries have become police states). We aferwards held Holy Mass, which was followed by a Flemish "Cantus," all of us singing and drinking Flemish beer. That evening we could look back on a successful demonstration. 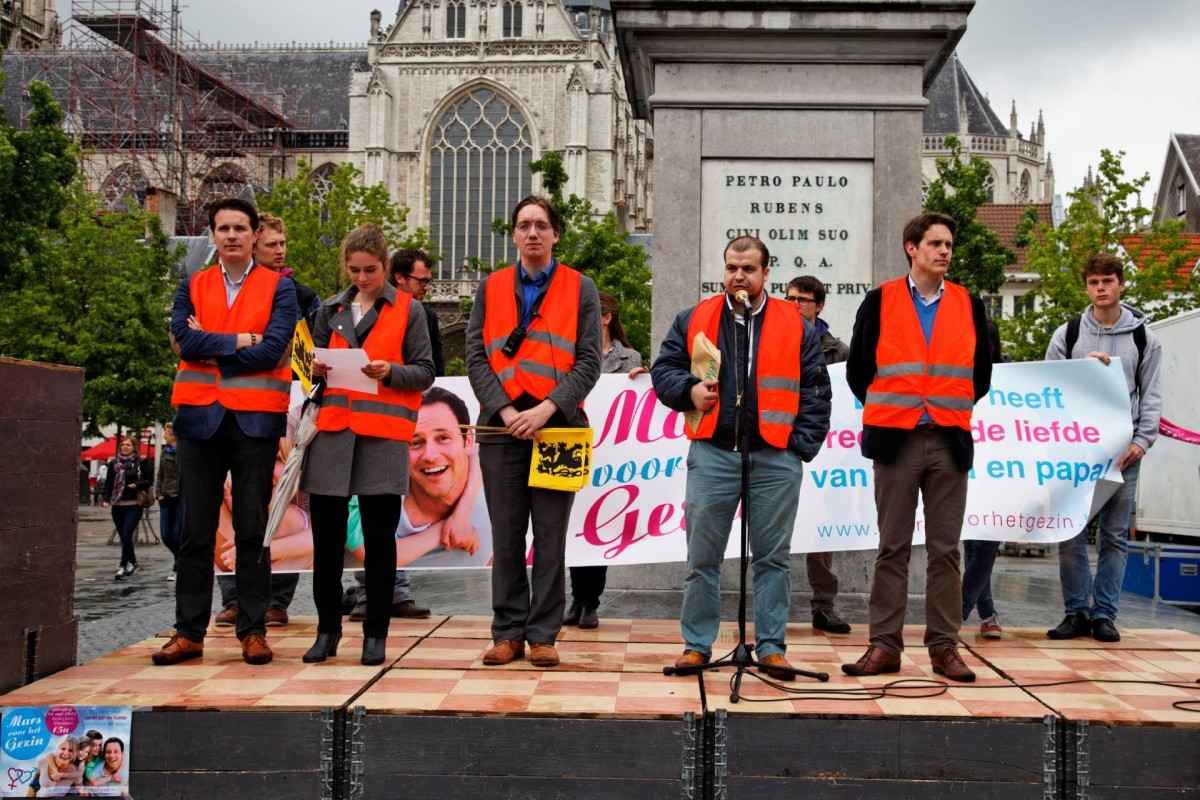 Belgian Parliament
The arrest of the gay couple got the attention of the national media and — to our astonishment — the national Parliament in Brussels. The liberal OpenVLD party raised questions, but in the end produced nothing but hot air.

Anger
Organizing the march caused a lot of anger, both inside and outside the Church. I can understand the anger; here in Belgium there are too many Catholic organizations in comparison with the number of Catholics. Each of these organizations needs its share of money and attention — so starting yet another organization was not greeted with enthusiasm by the other Catholic groups. Things got even uglier when we started to challenge the liberal, pro-gay, anti-family consensus inside the Belgian Church. We were accused of being holier than the Pope himself.

Further reasons the Catholic hierarchy and others were angry with us is the fact that we are young, socially respectable people. One of us is a member of the board of an internationally operating Dutch-speaking network. Another is a member of the board of a municipality. I myself am a computer programmer with a French multi-national corporation. My guess is that people are genuinely afraid that we'll be taken seriously.

Then we have the fact that we were actually successful in promoting our message. Many Belgian Catholic organizations believe you have to be just as politically correct as the rest of society in order to be respected. Well, we proved them wrong. It is fair to say that 99 percent of Belgian Catholic organizations never reach outside Catholic circles, only preaching to their own choir. By leaving aside political correctness and taking a firm stance, we were able to break out of our own circles.

Last but not least, many conservative Catholics in Belgium believe they are men and women living among the ruins of the Faith and nothing can reverse the trend towards more liberalism. They have become so emotionally attached to that idea that proving them wrong causes an identity crisis, and they actually become angry when we prove that liberalism is not irreversible. 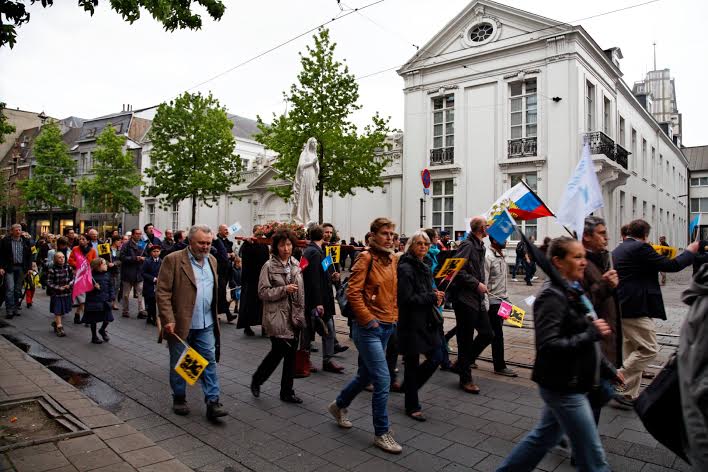 Aftermath
In the weeks and month following the demonstration we were regularly scandalized by the national media. Printed media like the liberal De Standaard and the socialist De Morgen continued to associate us with all kinds of other organizations. The state-owned VRT denounced us by portraying us as little different from radical Muslims. De Standaard printed that Pro Familia (the five of us) were even financing and organizing a new Catholic private school, when in reality we are just a small organization, incapable of such a financial undertaking. De Morgen did the same.

We ask ourselves what the next article will dream up about us. The way things are going now, we might even see ourselves promoted to agents of the Kremlin, trying to destabilize Belgium. That is the level of insanity coming from the media. Facts obviously don't matter if they can attack a small organization promoting non-liberal ideas.

The Future
I don't know what the future holds for us and for the Catholic Church in Belgium. We could lose our jobs or our social standing. We could even become martyrs for the Faith. Here in Belgium things have become crazy to the point that anything is possible. But that is okay. What worries me more is the obvious support of the Belgian hierarchy of teachings that are obviously not Catholic but outright far-left liberal. If we (and others who share the concerns of Pro Familia) did not exist, there would be nothing to oppose the trend towards ever more fake tolerance and teachings that aren't Catholic by any standard. That is scary, because the clergy and not the laymen should be the last defense for the teachings of Our Lord and Savior.

Call to Action Against the Culture of Death
Pro Familia wishes to set an example for the rest of Europe and the United States. We've noticed that if you promote Catholic teachings by opposing abortion, you will get ignored no matter how big the demonstration is. The U.S. media even ignored a million-man-strong march in Washington, D.C. This is because of a couple of reasons, but I think mainly because of the fact that the opinions on abortion are settled and the discussion is now 30 years old. People are basically tired of talking about abortion. However, if you promote Catholic teachings by attacking political correctness and pro-gay elements in the Catholic Church, you will get the full attention of the media. It's like sounding the anti-aircraft alarm over a completely filled square.

There are other ways to promote pro-life truths. If you don't know any people to organize with or don't have the means, you should start your own family and try to have many children. If you are married and hesitant to do so, then pray to overcome your fear and seriously consider starting a family anyway. God will always provide for His faithful children. When you think about it, you do not have any arguments not to.

So what are you waiting for? Get busy promoting life and faith!

Erwin Wolff is member of the board of Pro Familia, a pro-life lay apostolate based in Belgium. You can read more from him at the Pro Familia blog. Follow Pro Familia on Facebook here.