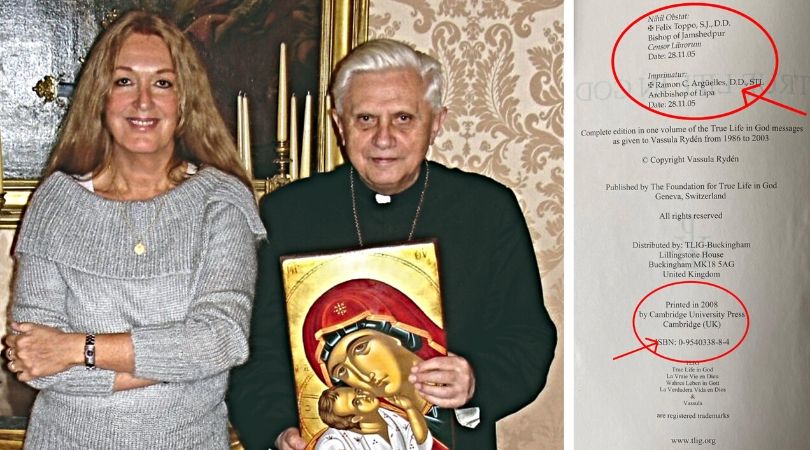 ROME (ChurchMilitant.com) - A controversial "mystic" censured by the Vatican stamped the Cambridge University Press (CUP) trademark on her book, True Life in God, when the book was not published or printed by the prestigious academic publisher.

Church Militant has also learned that the nihil obstat ("nothing obstructs") and imprimatur ("let it be published") for Vassula Rydén's book containing her "revelations" were given by the bishop of Jamshedpur (India) and archbishop of Lipa (Philippines) even though canon law requires the approval to be granted by the "local ordinary" of the author or publisher.

Rydén, who is Greek Orthodox, has lived in Rome at least since 2004. The publisher of the 2008 edition of True Life in God is based in Geneva, Switzerland.

CUP confirmed to Church Militant by telephone that it had not printed Rydén's book. CUP also categorically stated it did not print books published elsewhere.

"The University of Cambridge name and coat of arms not only form a key role in the internal branding of the University, but they also represent the reputation of the University externally and internationally," Cambridge University's "Trademark and licensing" web page states. "As such, they have significant commercial value."

"By trademarking these assets, the University is able to protect itself against those who wish to benefit from its reputation by falsely implying association with the University through the use of the name and/or coat of arms," the notification emphasizes.

On the basis of Church Militant's investigation, CUP has created "a new case" and its piracy department is investigating potentially fraudulent use of its trademark.

No one takes 'imprimaturs' seriously — not for the past 40 years.

A Rome-based expert in canon law questioned the granting of the nihil obstat by Bp. Felix Toppo of Jamshedpur and the imprimatur by former Apb. Ramón Argüelles.

"It would appear that in issuing those decrees, either the bishops were ill-informed, or worse, ill-advised," the canonist told Church Militant. "Were they duped by false representations made by Ms. Rydén?"

Rydén's leading defender, Fr. Joseph Iannuzzi, insists that because "the TLIG prophetic revelations enjoy the Magisterium's imprimatur and nihil obstat — official ecclesiastic seals of approval ... Christians are prohibited from setting themselves up as their judge and from publicly condemning them."

On the TLIG website, Iannuzzi claimed the imprimatur and nihil obstat verify the "supernatural nature" of Rydén's revelations, affirming her as "an instrument of God in our days to bring to reality God's dream, the Holy Father's dream, the Church's dream, which may be the greatest event of the early years of the Third Millennium: THE UNITY OF ALL DISCIPLES OF CHRIST!"

"No one takes 'imprimaturs' seriously — not for the past 40 years," distinguished Catholic scholar Dr. John Zmirak told Church Militant. "The fact that Cdl. McCarrick approved of something proved ... exactly what, do you think?"

"What's more, the notion that the Magisterium is entailed in such decisions is laughable. The Magisterium amounts to the deposit of Faith passed on from the Apostles. It could not possibly include the contents of private 'revelations,'" Zmirak explains, debunking Iannuzzi's argument.

"Even a papal ex cathedra statement couldn't force us to believe those since they're outside the proper bounds of Church authority. All popes can say is whether or not a revelation includes heresy — not whether it was real or totally spurious," the author of best-selling The Politically Incorrect Guide to Catholicism clarified.

The Catechism of the Catholic Church teaches that "so-called 'private' revelations ... do not belong, however, to the deposit of Faith."

Church Militant contacted Fr. Iannuzzi, asking him to clarify the CUP brand name on Rydén's book. As of press time, we received no response.

The Church does not oblige the faithful to believe private revelations, given, at certain times to individuals.

On June 9, Church Militant also wrote to Felix Toppo, now archbishop of Ranchi. We asked if he could confirm if Rydén was domiciled there when the seal was granted or if Rydén's books were published by a local publisher. Toppo did not respond.

On occasions, imprimatur has been withdrawn from a publication. The English translation of The Liturgical Psalter, prepared by the International Commission on English in the Liturgy, had its 1995 imprimatur withdrawn three years later.

"There are notorious examples of quite unworthy books boasting ecclesiastical approval until the faithful's consternation over such aberrations finally gets someone's attention somewhere and the approvals are withdrawn," Peters notes, citing the famous example of Anthony Wilhelm's Christ Among Us (1968), which lost its imprimatur in 1984 after Roman intervention.

The seals of approval are "in the end, judgment calls made by ecclesiastical officers about how authors have presented their views on important (and often complex) Church teachings and practices, and are not themselves infallible exercises of the Church's teaching office," Peters writes.

Rydén has also been accused of using a 2004 picture taken with then-Cdl. Joseph Ratzinger (featured above) to create "the false impression" that she enjoys his endorsement, according to the website Pseudomystica.info.

Ratzinger, later Pope Benedict XVI, agreed to be photographed with Rydén on condition that the picture would not be used for "cheap propaganda." However, the picture "is used to this day to promote Rydén's meetings and books," says Pseudomystica.info.

In a 1995 notification, then-Cdl. Ratzinger asked bishops to intervene so that "no opportunity may be provided in their dioceses for the dissemination of her ideas" and invited "all the faithful not to regard Mrs. Vassula Rydén's writings and speeches as supernatural," Church Militant reported.

In 2007, CDF prefect Cdl. William Levada reiterated that "[t]he notification of 1995 remains valid as a doctrinal judgment of the writings examined" and that "it remains inappropriate for Catholics to take part in prayer groups established by Mrs. Rydén."