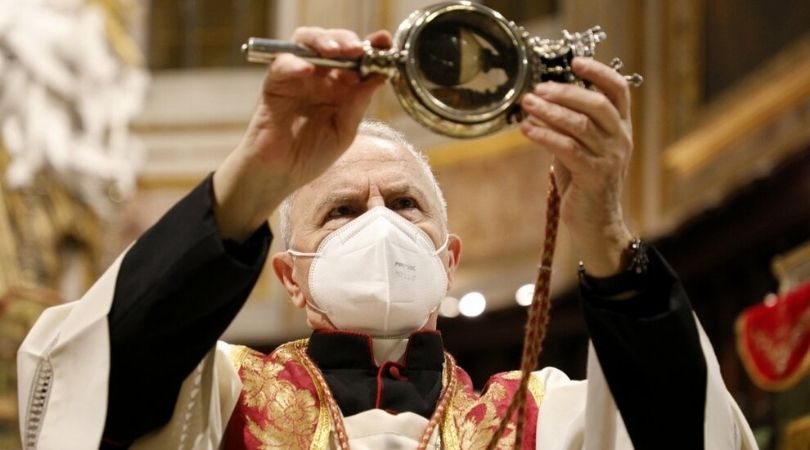 Shakes Neapolitans as an omen of bad tidings

NAPLES (ChurchMilitant.com) - The liquefication of St. Januarius' blood in Naples, a scientifically examined phenomenon, did not occur as expected Wednesday. Neapolitans interpreted it in line with tradition as a portent of further plagues, war, famine and adversities.

The solid coagulated blood inside the sealed glass vial did not change into liquid despite the faithful praying for hours in the morning and a special Holy Mass in the afternoon.

"When we took the reliquary from the safe, the blood was absolutely solid and remains absolutely solid," Fr. Vincenzo de Gregorio, abbot prelate of the Royal Chapel of the Treasure of St. Januarius in Naples Cathedral announced.

Even though the Church does not officially recognize the manifestation as miraculous, Neapolitan Catholics view a failure of the coagulated blood to mysteriously liquify as a sign of divine displeasure and forthcoming chastisement.

Italy marked the 40th anniversary of the earthquake last month, and memories of what has been called the Republic's "worst catastrophe" are fresh in the national consciousness.

The "Miracle of San Gennaro" is expected to occur three times a year — on the Saturday preceding the first Sunday in May (the feast of Januarius' translation), Sept. 19 (the feast celebrating his martyrdom), and Dec. 16 (the feast honoring him as patron saint of Naples).

On Dec. 16, the "miracle" of the liquefaction is repeated in memory of the 1631 eruption of Vesuvius, when the blood liquefied and the magma flow stopped miraculously and did not invade the town, the cathedral's website on St. Januarius explains.

"The fact that the blood of San Gennaro (St. Januarius) failed to liquefy has been looked upon with curiosity even by the mainstream media, often in terms that are not greatly respectful, as the secular media confuse religion with superstition," illustrious Italian epidemiologist Dr. Paolo Gulisano told Church Militant.

"It's regarded as a bad omen, a potential harbinger of an aggravation in the pandemic. But I think it is rather a sign from Heaven pointing at the widespread lack of faith inside the Catholic Church," the former professor of history of medicine at the Bicocca State University of Milan said.

Our clergy have deprived the faithful of religious assistance, suspended the Mass, imposed Holy Communion on hands. Disrespect for the Eucharist is sadly common as faith is decreasing. I think our clergy should read the signs of the times, but in a transcendental perspective, not an exclusively human one.

On Wednesday, Cdl. Crescenzio Sepe exhorted his flock, saying: "If something needs to melt, it is the hearts of people."

Sepe, whose resignation as the archbishop of Naples was accepted by Pope Francis Saturday, had announced in September — to a cathedral mostly empty due to the Wuhan virus restrictions — that the blood had "completely liquefied, without any clots."

"I have a big announcement to make: Even in this time of coronavirus, the Lord through the intercession of St. Januarius has liquefied the blood!" Sepe declared Sept. 19.

The blood miracle of St Januarius in Naples, Italy

I think it is a sign from heaven pointing at the widespread lack of faith inside the Catholic Church.

In December, the vault storing the blood is unlocked, and if the blood is found liquid or becomes liquid, it is shown to the people in the Cappella del Tesoro (Treasure Chapel).

The blood remains liquid during the entire service, at other times it resolidifies before it is returned to the vault, while very occasionally it fails to liquefy.

Anna, a virologist, told Italian newspaper Quotidiano that God had withheld the miracle because "we are blasphemous, pessimistic, depressed; we think more about shopping than praying."

"The virus will stay with us for years. This vaccine will not be enough because COVID is a monster," Anna warned.

The last time the blood did not liquefy was in December 2016, and locals say the miracle takes place less frequently Dec. 16.

St. Januarius, third-century bishop of Benevento, a province northeast of Naples, is believed to have been martyred during the Christian persecution of Emperor Diocletian for visiting and encouraging a deacon named Sosius.

Januarius, Sosius and other clergy were thrown to wild beasts in the amphitheater, but when that didn't work, the governor of Campania ordered them beheaded.

The saint's bones and blood are preserved in the Naples cathedral as relics and, according to tradition, his blood was collected by a serving woman from the stone on which Januarius was beheaded.

The virus will stay with us for years. This vaccine will not be enough because COVID is a monster.

There are two vials of blood, one about two-thirds filled with dried blood and the second containing only a few drops.

Scientists at the University of Naples verified that the vials contained blood (possibly contaminated by a foreign substance) by conducting a spectroscopic analysis of the blood in 1902.

In 1989, further examination was made of the blood using spectroscopic analysis similar to that used in 1902, but with photographic detection that confirmed the 1902 results.

The Catholic Church accepts physical miracles as authentic only in very few cases. It is largely skeptical when there is no religious message associated with such phenomena, write scientists Michael Epstein and Luigi Garlaschelli in the Journal of Scientific Exploration.

The skeptical scientists, after positing various hypotheses, conclude that the blood of St. Januarius, as well as other liquefying miracle blood, may actually be a thixotropic gel — a gel that liquefies when it is shaken or stirred.

Epstein and Garlaschelli, however, are unable to answer a number of questions raised by the phenomenon, including its occurrence only on specific days in the year. 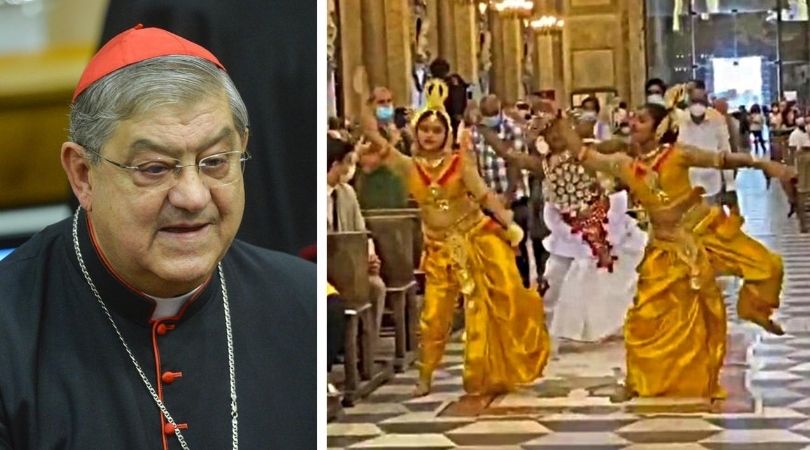