Bp. Peter Jugis has a record of standing up to theological leftists

CHARLOTTE, N.C. (ChurchMilitant.com) - The bishop of Charlotte, North Carolina is calling on Catholics to insist on a full, fair hearing of President Trump's Supreme Court nominee.

"Over the past few weeks many commentators have taken the stance that Roe versus Wade is 'settled law' that should always allow access to abortion," wrote Bp. Peter Jugis in a letter published Wednesday. "Some senators have expressed the opinion that a nominee who opposes the Roe decision is unfit for office. Both of these ideas are untrue."

"The Supreme Court will always have the authority to review our laws, especially one as unjust as the abortion access created by the Roe decision," he continued, going on to urge Catholics to contact their senators.

"Please ... write to our two senators, Richard Burr and Thom Tillis," he wrote. "Our senate should consider all of the qualifications of Judge Kavanaugh in making its decision."

In the wake of Trump's announcement of Judge Brett Kavanaugh to replace Justice Anthony Kennedy, the Left has gone on the immediate attack against Kavanaugh. Senator Chuck Schumer of New York said of Trump's pick, "[T]his nominee will lead to a court that repeals women's reproductive freedom."

Justice Kennedy's retirement marks a unique opportunity for Trump's GOP to elevate a constitutionalist, such as the late Justice Antonin Scalia, to fill Kennedy's vacancy and secure a conservative arrangement on the Court for the foreseeable future, potentially leading to the eventual reversal of Roe v. Wade.

A fifth conservative justice on the Supreme Court opens the possibility of reversals on landmark decisions that have upheld abortion and same-sex "marriage." In 1992, Planned Parenthood v. Casey reaffirmed the decision of Roe v. Wade that enshrined abortion as a constitutional right. Speculation has already arisen of the possibility of Roe being overturned.

Justice Kennedy's opinion in Casey famously admitted that contraception leads to abortion, stating that people had "organized intimate relationships and made choices that define their views of themselves and their places in society, in reliance on the availability of abortion in the event that contraception should fail."

Faithful Catholics, as well as pro-life and pro-family Evangelicals, are also starting to talk about reversal of Obergefell v. Hodges, a decision that forced recognition of same-sex "marriage" on all 50 states.

Senate Democrats have called for no nomination to take place until after the midterm elections. Chris Murphy of Connecticut said in a tweet Wednesday afternoon, "McConnell set the rule. Now, he and Senate Republicans need to follow it. No vote on a Supreme Court nominee until after the new Congress is seated."

Bishop Jugis speaking out in support of a fair hearing for Kavanaugh is his latest move lauded by faithful Catholics. In 2016, Church Militant reported that Bp. Jugis opened a minor seminary teaching college-aged applicants Sacred Music, theology, logic and Latin.

Church Militant also reported in 2015 that Bp. Jugis canceled a talk in the diocese by pro-sodomy nun and head of the condemned group New Ways Ministries, Sister Jeannine Gramick. 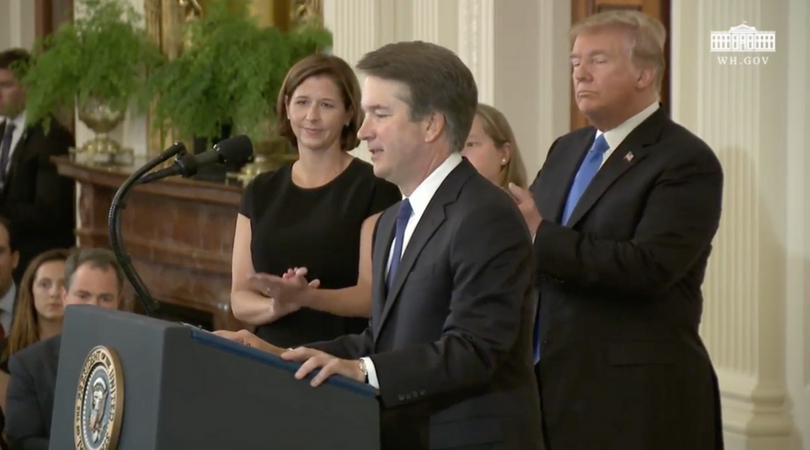