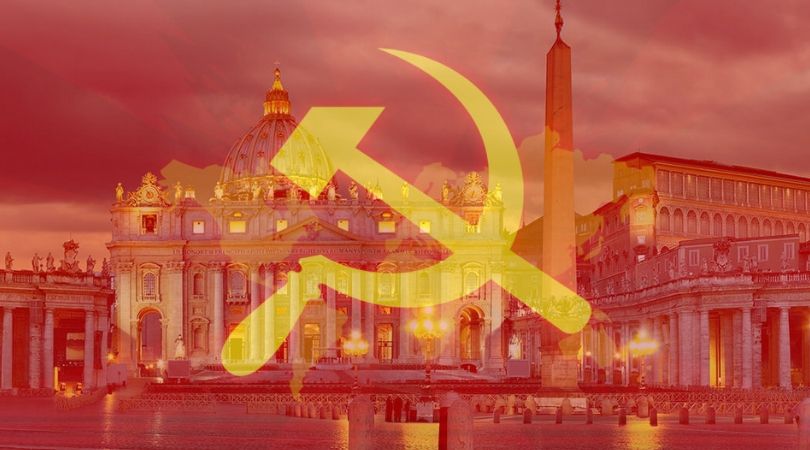 Pope Francis' commitment to promoting SDGs was first mentioned in a document by the United Nations Population Fund entitled "Religion and Development Post 2015."

Appreciation of these issues is growing within the UN, as evidenced for example in the May 2014 meeting between the UN leadership and representatives of the Vatican and His Holiness the Pope on the SDG agenda. This meeting was followed by an audience between the UN Secretary-General and His Holiness, who committed the Catholic Church to support the SDG efforts.

The Lepanto Institute's report states that, in his 2015 encyclical letter Laudato Si, Pope Francis made 23 direct references to SDGs.

In his address to the UN General Assembly in September of that same year, the Pope said, "The adoption of the 2030 Agenda for Sustainable Development at the World Summit, which opens today, is an important sign of hope."

Communists have always used the plight of the poor as justification for the implementation of their nefarious schemes.

According to the report, Pope Francis' promotion of the UN's SDGs is concerning since those goals are firmly rooted in communist ideology. The UN offers what appears to be a poverty reduction program, but in reality, it is a plan for creating a global socialist utopia.

The UN has 17 SDGs intended "to transform our world" by 2030. The report details how these goals are grounded in communism, especially as spelled out in The Communist Manifesto.

The first SDG is to end poverty in all its forms everywhere.

"Communists have always used the plight of the poor as justification for the implementation of their nefarious schemes," notes the report.

The report points out that plank seven of The Communist Manifesto calls for a top-down approach to industry and agriculture.

The fourth SDG is to ensure inclusive and equitable quality education and promote lifelong learning opportunities for all.

The report notes that plank 10 of The Communist Manifesto calls for "[f]ree education for all children in public schools."

If I should distribute all my goods to feed the poor, and if I should deliver my body to be burned, and have not charity, it profiteth me nothing.

Church Militant spoke with Michael Hichborn, president and founder of The Lepanto Institute, about Pope Francis' promotion of the UN's SDGs and the corporeal and spiritual works of mercy.

"The primary difference between the corporeal works of mercy and initiating government programs is that the works of mercy are person to person and involve an act of love," Hichborn said.

"There is no love involved in the payment of government programs through taxes. And without an act of love, there is no merit," he added.

Hichborn highlighted the principal difference between authentic works of mercy and implementing government programs by quoting Saint Paul's first letter to the Corinthians.

"If I should distribute all my goods to feed the poor, and if I should deliver my body to be burned, and have not charity, it profiteth me nothing," (1 Corinthians 13:3).

"If government and secular programs simply perform the 'jobs' of housing, clothing, feeding and caring for the sick and poor, then the reward is in the payment for the service and there is no love, no charity involved at all," Hichborn said.

This means there is no spiritual profit for anybody involved.

"If Pope Francis were advocating for the works of mercy, however, he would be exhorting men and women of good will to come out of the world and enter religious mendicant orders where the practice of love is the rule," he added.