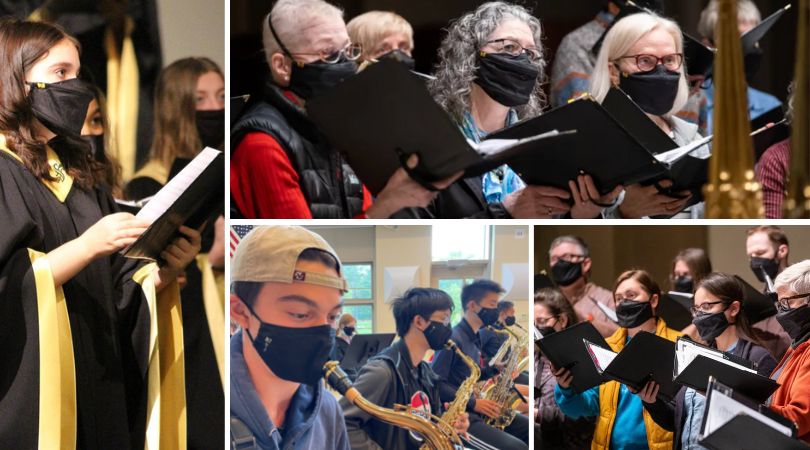 LONDON (ChurchMilitant.com) - According to new research, bishops spooked by COVID-19 alarmism capitulated to state diktats and erred disastrously by shutting down choirs — assuming singing to be a super-spreader of the coronavirus.

In March 2020, after 52 of the 61 choristers belonging to the secular Skagit Valley Chorale in Mount Vernon, Washington, became infected with the Wuhan virus (two died), the hysteria surrounding choirs spread worldwide.

Concurrently, on March 8, 2020, 102 of 130 choristers belonging to the Amsterdam Mixed Choir caught COVID-19 after a performance of Bach's St. John Passion in the city's Concertgebouw auditorium.

In Germany, 59 out of 78 singers of the Protestant Berlin Cathedral came down with the virus, leading virologists to claim, without evidence, that singers absorb more virus particles because they tend to breathe deeper into their diaphragms than during normal breathing.

Now, a review of the Skagit Valley Chorale case published in the peer-reviewed Public Health journal in November has debunked the chorus of fearmongers and demonstrated that many of the choristers' symptoms started too early to be caused by the rehearsal.

The research conducted by Nottingham Trent University, Brunel University and Brighton and Sussex Medical School concluded that "an unexamined assumption has led to erroneous policy conclusions about the risks of singing."

There is no scientific evidence to prove the dangers of singing.

"We show it is vanishingly unlikely that this was a single point source outbreak as has been widely claimed and on which modelling has been based," the study emphasized. It also found a "lack of evidence" for the view that "singing played any particular role" in the transmission.

The scientists cautioned against health officials stigmatizing individuals, hoping their paper would exonerate the chorister who has spent more than two years believing he was responsible for infecting dozens of people and causing the deaths of two fellow singers.

Shortly after choirs were banned, musicians had predicted the consequences would be "catastrophic," especially for choirs that include children.

"Britain's choral tradition is now under major threat," Charles Cole, director of the London Oratory Junior Choir and the London Oratory Schola warned in 2020, stressing that "there is no scientific evidence to prove the dangers of singing."

It [singing] was not the cause of the outbreaks of COVID-19 at these concerts.

In July 2020, more than 200 leading musicians, composers and conductors sounded the alarm that "the work of church and synagogue musicians across the country is still under serious threat, with some professional choirs already facing permanent disbandment."

Musical celebrities, including Roxanna Panufnik, composer of the Westminster Mass, said that religious music was "under threat" and criticized the ban on singing in churches as based on "assumptions, not science."

"The outbreak in the Skagit Valley Chorale sent shockwaves round the singing world, and I'm sure singers everywhere will welcome the fact that this is being looked at again," choirmaster and television presenter Gareth Malone told The Telegraph.

"Singing with others is so good for us in so many ways, but some people are still fearful about singing because of Covid, and so it's important that we are constantly re-evaluating the evidence," Malone added.

While bishops actively supported the ban on choral music, the European Choral Association observed that there was "limited scientific examination" with "no clear evidence that infections occurring in a small number of choirs were caused by the act of singing itself."

"Collective singing is an activity that actively supports the immune system, often recommended for those with breathing and lung disorders. It has suddenly been labelled as 'dangerous,'" a statement from the ECA pointed out as early as June 2020.

Scientists who disagreed with the alarmist consensus were silenced, and their voices were not heeded.

In May 2020, fluid mechanics expert Christian Kähler of the Military University in Munich studied "singing in low and high frequencies" and different instruments using flow analysis and concluded that "singing is quite safe."

"It was not the cause of the outbreaks of COVID-19 at these concerts," Kähler said. "Air was only propelled about half a meter in front of a singer, and that is not far enough to cause the infection levels of these outbreaks."

The consequences have been catastrophic for church choirs. The Cologne archdiocese, with a membership of 25,000 adult church choristers, reported a drop of over 30%.

Worse still, not a single person has enrolled in the course for Catholic church music at the Cologne University of Music this winter semester, Richard Mailänder, church music director in the archdiocese, said Friday.