Anti-Trump protest priest silent on bloodbath in his native land

KAJURU, Nigeria (ChurchMilitant.com) - A Nigerian Catholic priest who organized clergy anti-Trump protests Monday is being slammed for his silence on the wholesale slaughter of Christians in Nigeria, even as U.S. bishops are accused of promoting a false narrative on the persecution of Nigerian Christians.

Muslim Fulani herdsmen armed with machetes hacked to death a 3-year-old girl and nine defenseless Christians in Nigeria's Kaduna state the same week Josephite Fr. Cornelius Ejiogu declared that the Church could not remain silent against police brutality in America.

Underlining the irony of a Nigerian priest protesting an American president who had just signed an Executive Order on Advancing International Religious Freedom, black British politician David Kurten told Church Militant, "It is nonsensical and hypocritical for a priest to protest against Trump, who has visited churches to openly display his solidarity with Christians."

"While 'Black Lives Matter' and Antifa protestors are assaulting police officers, looting businesses and feigning self-righteousness against President Trump, they have no concern for real black lives, which are being devastated around the world," the member of the London Assembly lamented.

"There is not even any mention by these Marxist mobs of the thousands of black Christians who have been massacred, raped or mutilated by Fulani Islamists in central Nigeria this year, let alone any tears," Kurten, a committed Christian, added.

While 'Black Lives Matter' and Antifa protestors are assaulting police officers, looting businesses and feigning self-righteousness against President Trump, they have no concern for real black lives, which are being devastated around the world.

"This attitude is mirrored by the Nigerian priest Fr. Cornelius Ejiogu, who chose to lead his flock in protest at President Trump rather than standing up for his fellow Christians," Kurten remarked. "Fr. Ejiogu is typical of one whom Christ calls 'the blind leading the blind.' He should instead take up the cause of his fellow black, Nigerian Catholics and Christians who the real victims of systemic injustice."

Father Ejiogu also claimed he, and not Abp. Gregory Wilton of Washington D.C., was responsible for organizing the protest after Church Militant broke the story of the archbishop summoning "local clergy, bishops and the Catholic lay faithful to publicly witness against institutional racism and to pray for the soul of George Floyd and the soul of this country" outside the White House.

Five Nigerian Christians are massacred every day by Fulani and Boko Haram jihadists, according to a report by Genocide Watch, describing Nigeria as "a killing field of defenseless Christians."

"No one doubts the legacy of slavery on the black population of the U.S., but that same legacy of slavery and oppression is not just a historical legacy for Christians in West Africa, it is being reinvented as we speak," independent consultant on persecution Dr. Martin Parsons told Church Militant.

"In 2014, Boko Haram announced it had re-implemented Sharia provisions allowing enslavement of non-Muslims, with its leader Abubakar Shekau using this to justify the abduction of 270 mainly Christian schoolgirls from Chibok. According to the Global Terrorism Index 2019, Boko Haram is today the world's fourth deadliest terrorist group and has spread its attacks on Christians from Northern Nigeria to neighboring countries such as Cameroon," Parsons elaborated.

"At the very same time Christians led by William Wilberforce were leading the world in abolishing the slave trade in Britain, the Sokoto Caliphate, a huge jihadist slave-raiding empire was emerging among the Fulani in what is now Northern Nigeria and neighboring countries. By 1900 it had between one- and two and half million slaves," Parsons pointed out.

President Donald Trump signed his executive order supporting persecuted religious minorities after his visit with his Catholic wife to Pope St. John Paul II's shrine — a visit considered symbolic as the Polish pope was widely celebrated for his work on behalf of persecuted people of faith.

"I am aware of the immense suffering and loss of life caused by Boko Haram and ISIS in northeastern Nigeria that has also spilled over into neighboring Cameroon, Niger and Chad," Bp. David J. Malloy of Rockford diocese wrote to Abp. Augustine Akubeze, president of the Catholic Bishops' Conference of Nigeria in February.

However, in a March letter to U.S. Secretary of State Mike Pompeo on behalf of the United States Conference of Catholic Bishops (USCCB), Malloy downplayed the Islamic persecution and described the problem of a holocaust facing Christians as "increasing violence in Nigeria due to herder-farmer conflict."

Genocide Watch dismissed Malloy's diagnosis as "a false narrative," explaining: "Apart from deceitfully christening the massacre of Christians as a 'herders-farmers clash,' the Nigerian government also censors the media and some researchers, compelling them to describe the killings as 'killings by unknown gunmen' or arising from 'herders-farmers clash.'"

Fr. Ejiogu should take up the cause of his fellow black, Nigerian Catholics and Christians who are the real victims of systemic injustice.

"Today Fulani herdsmen are doing exactly what their forebears did — mounting jihadist attacks on Christian villages in Nigeria's middle belt, attacks which, according to the latest Global Terrorism Index, increased by 261% in the previous year. Yet these attacks are being excused as 'land disputes' when the reality is that the victims are overwhelmingly Christian," Dr. Parsons, former aid worker to Afghanistan and Pakistan, told Church Militant.

Meanwhile, defying social distancing measures, around 40–50 priests and deacons and 200 lay Catholics and nuns turned out to for the anti-Trump rally, some linking arms while marching.

Participants at the rally refused to condemn the tornado of violence, rioting, arson and looting which has spread across America, Britain, France and Brussels and has led to the killing, shooting, stabbing and wounding of hundreds of police officers, many of them black.

Some of the Catholic protestors even carried Black Lives Matter (BLM) signs — even though the pro-abortion and pro-LGBT network has declared war on the family.

Despite BLM's manifesto claiming that it sees itself "as part of the global black family" and insisting that "all black lives matter, regardless of ... religious beliefs ... or location," it has failed to protest the industrial scale massacre of black Christians in Nigeria.

In January, Fr. Joseph Bature Fidelis of the diocese of Maiduguri appealed to Western Christians and countries following the abduction of four young seminarians in Kaduna city: "Every day, our brothers and sisters are slaughtered in the streets."

"I ask the government of Italy, the country where I studied, and all European governments to put pressure on our government to do something to defend us. Otherwise we risk extermination. Our people are suffering so much. Please help us not be silent in the face of this immense extermination that is taking place in silence," he pleaded.

Neither the Vatican nor the Italian or European governments have made a substantive response to the appeal, despite Pope Francis signing his declaration for Human Fraternity with the leader of the Sunni Muslim world.

Church Militant has written to Fr. Ejiogu, asking why he was ignoring monumental persecution in his own country of origin, while joining hands with anti-Catholic Black Lives Matter. As of press time we received no response. 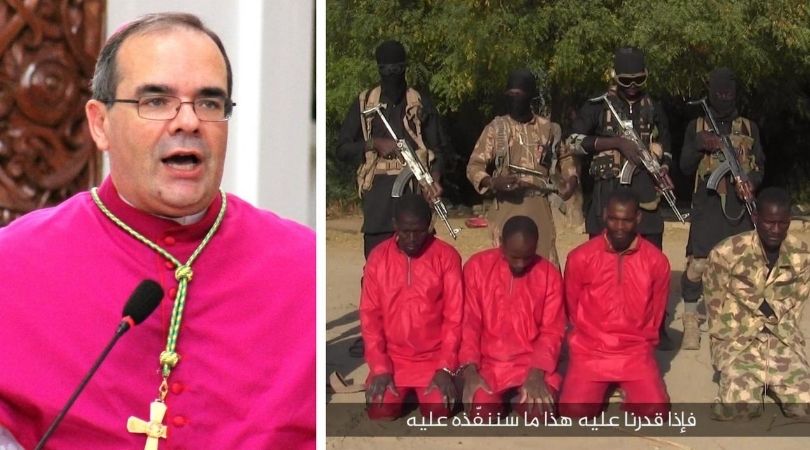