SOUTH PLAINFIELD, N.J. (ChurchMilitant.com) - A pastor in the diocese of Metuchen, New Jersey, removed the name of a practicing homosexual serving as the facilitator of a parish LGBT group after Bp. James Checchio contacted him in response to a Church Militant investigation.

Church Militant confirmed that a number of parishioners in Metuchen have called and written Bp. Checchio for months to express their concerns.

The brochure for the group offers an unclear statement regarding the group's adherence to Catholic Church teaching:

Rooted in peace & justice, we are a parish-based group, sharing faith and support with gay, lesbian, bisexual and transgender adults, 18 and over, their families and friends, with outreach to the Metuchen Diocese and our sisters and brothers across our local community. We acknowledge and respect the teaching of the Roman Catholic Church and strive to create an environment where people may honestly and faithfully share their stories. Though we are a Catholic group in origin, our invitation and welcome is open to people of all faith traditions.

Reverend John Alvarado, pastor of Sacred Heart, was listed as the main contact for the group, while David Harvie — in a so-called same-sex marriage — was listed as "IGI Facilitator" on Friday. Harvie's name was removed from the website Monday after the diocese contacted the parish in response to this Church Militant investigation.

Church Militant confirmed that a number of parishioners in Metuchen have called and written Bp. Checchio for months to express their concerns about Harvie's role in an LGBT group ministering to Catholics.

They have also made multiple requests for face-to-face meetings, which have never been granted. Parishioners are deeply concerned and confused about the platform Sacred Heart is providing Harvie.

Checchio either fails to respond to requests or responds with general correspondence that never addresses Harvie or the LGBT group at Sacred Heart.

One parishioner told Church Militant that an official from the diocese, in response to multiple requests for a face-to-face meeting with Checchio, wrote, "No meeting will occur," claiming that Bp. Checcio was too busy.

Prior to Bishop Checchio's installation as Bishop of Metuchen and following diocesan synod recommendations in 2007, a parish in the Diocese of Metuchen began In God's Image, a parish outreach faith sharing and discussion group, both ecumenical and interfaith, that meets monthly. The stated purpose of the group is to create an environment where people may honestly and faithfully share their stories while acknowledging and respecting the teachings of the Roman Catholic Church. The Diocese of Metuchen has never received any information to indicate that the group operates in nonconformity with the teachings of the Catholic Church on marriage and human sexuality. Nevertheless, the Diocese of Metuchen has received inquiries as to why the group is allowed to meet for such discussions.

Upon receiving recent inquiries, Bishop Checchio asked diocesan staff to speak with the pastor of the parish where the discussion group meets. The pastor confirmed that, effective earlier this year, he assumed the role of facilitator of In God's Image and he also affirmed that although the group is open to people of all faiths, it acknowledges and respects Roman Catholic teachings in their discussions. Any information that suggests the group is anything otherwise or is led by a different facilitator is inaccurate and diocesan staff have since asked for any incorrect listings to be modified.

This statement contradicts claims by Catholics in Metuchen, who confirm that they have written multiple messages indicating their concerns that a same-sex married man living in direct contradiction to Church teaching is facilitating a ministry to LGBT Catholics.

Checchio asked diocesan staff to speak with the pastor of the parish after Church Militant sent an inquiry to the diocese of Metuchen on Friday, at which time Harvie appeared on Sacred Heart's webpage as the facilitator IGI before being removed on Monday.

Though scrubbed from the Sacred Heart website, Harvie's name still appeared as the IGI facilitator on the diocesan website Tuesday.

The email listed for Harvie on the diocesan website (sacredheartigi@gmail.com) is now listed as a second email for Alvarado on the Sacred Heart website.

Church Militant contacted Alvarado on Monday to ask when Harvie was removed from the position as facilitator, if Harvie still attends IGI meetings and if Harvie still has any involvement with the parish in an official or non-official capacity.

"Thank you for your interest in our parish ministry 'In God's Image'. All media inquiries are at this time directed to Tara Smith, Office of Communications, Diocese of Metuchen. God's blessings," responded Alvarado.

Pro-LGBT Jesuit Fr. James Martin thanked Church of the Sacred Heart in 2017 in a tweet for its LGBT activism: "Thanks to Fr. John Alvarado, David Harvie, and all who came to Sacred Heart Parish in South Plainfield, NJ, to talk about LGBT Catholics!"

Martin also posted pictures from the event on his Facebook page, including a picture of Harvie and his husband: "David Harvie, one of the organizers of the LGBT Pilgrimage to the Newark cathedral (right) with his husband Mark," read the caption.

Harvie was one of the organizers of the LGBTQ pilgrimage to the Newark cathedral in Cdl. Joseph Tobin's archdiocese.

Harvie was one of the organizers of the LGBTQ pilgrimage to the Newark cathedral in Cdl. Joseph Tobin's archdiocese.

Father Alexander Santora, a pro-LGBT activist in Newark, thanked Harvie for his efforts in establishing the first pride Mass in Newark.

"And then we are blessed with Cardinal Tobin, our Archbishop, who little over a year ago, through the efforts of David Harvie, who is here today, welcomed our lesbian and gay brothers and sisters and transgendered into the Cathedral to celebrate for the first time, a pilgrimage mass," Santora said.

It remains unclear whether Harvie is still the IGI facilitator or working for the diocese in a different capacity now. 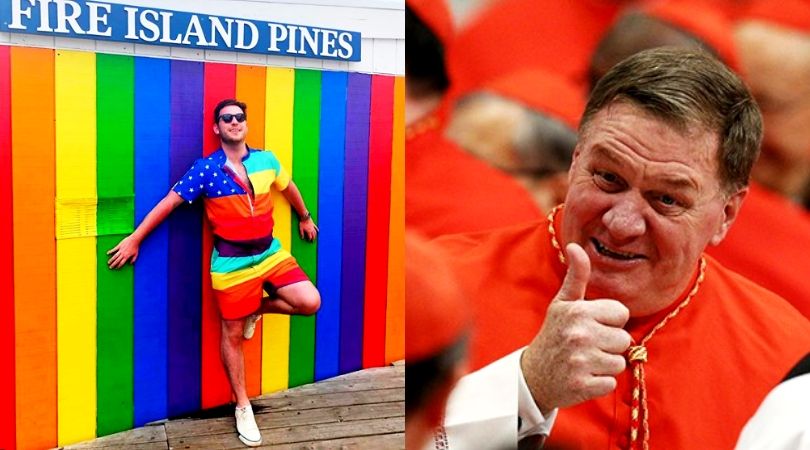