PISCATAWAY, N.J. (ChurchMilitant.com) - Bishop James Checchio of the diocese of Metuchen, New Jersey, invited LGBT activist Fr. James Martin to his residence prior to a controversial talk Martin gave in the diocese.

In February 2018, James Martin gave a talk at the Razberry's Banquet Center in Frenchtown, New Jersey, in the diocese of Metuchen.

Prior to the talk, Checchio personally invited Martin to his residence where they had "a wonderful discussion."

Before the talk, I was also honored to be invited by Bishop James Checchio, Bishop of the Diocese of Metuchen, to meet with him at his residence for a wonderful discussion.

"But the campaign of personal vilification and hatred that led to the moving of the talk simply emboldened an [sic] standing-room-only crowd to come out in the rain and pack the conference room and, not incidentally, purchase every book that was available, including 'Building a Bridge,'" wrote Martin in a Facebook post.

"Before the talk, I was also honored to be invited by Bishop James Checchio, Bishop of the Diocese of Metuchen, to meet with him at his residence for a wonderful discussion," he added. 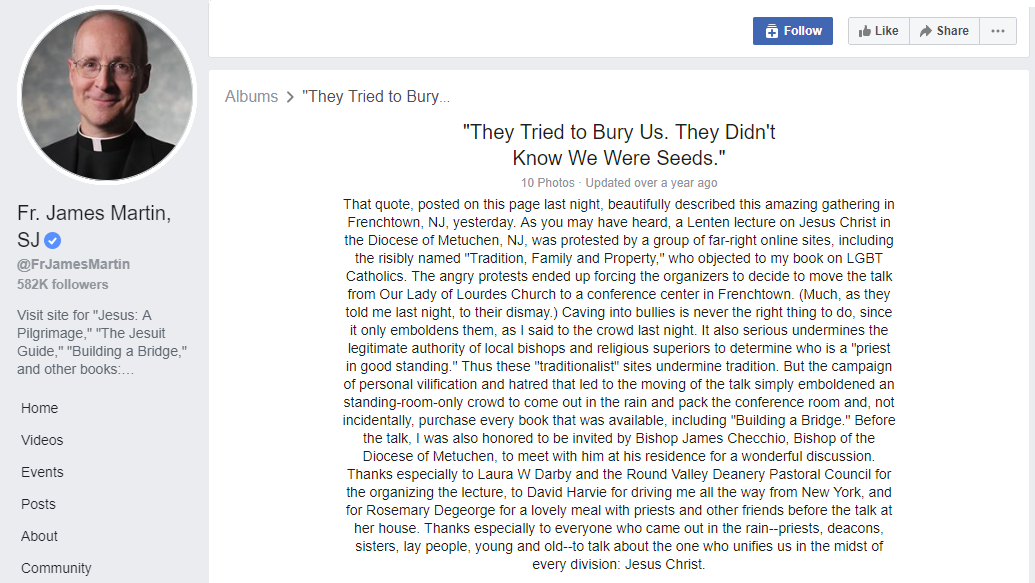 Martin repeated his gratitude on Twitter for Checchio inviting him for a private talk.

"Thanks to everyone who packed the room for a lecture on Jesus last night, which was moved after angry protests from hateful online groups," he said. "Thanks also Bishop Checchio for meeting with me before the talk." 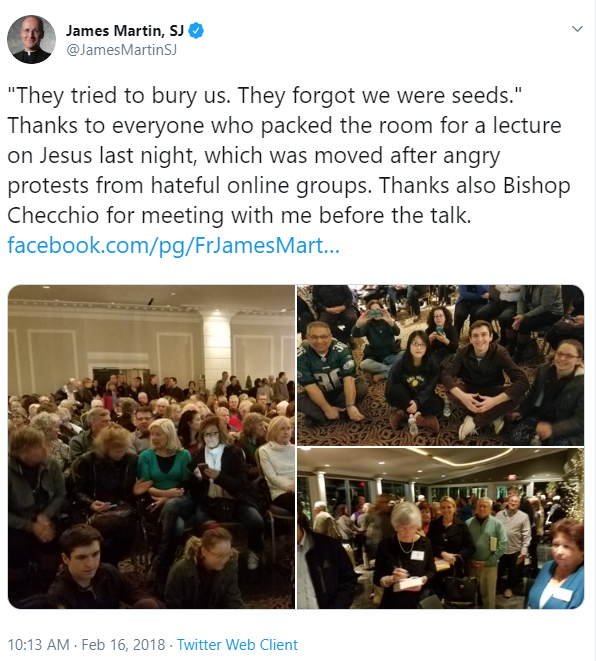 The talk was originally scheduled to occur at Our Lady of Lourdes in Whitehouse Station, New Jersey, in the diocese of Metuchen, but backlash from Catholics in the diocese forced the organizers to relocate the event to the banquet center in Frenchtown, New Jersey.

Father Abraham Orapankal, who was pastor of the Catholic Community of St. John Neumann at the time, discussed the relocation of this event in the bulletin:

It was with the intention of doing a meaningful spiritual event collaboratively that the Deanery Pastoral Council, with the approval of the Deanery Clergy, had decided to invite the prolific writer and theologian Fr. James Martin, S.J., to give a Lenten reflection on "Jesus – fully human and fully divine" on February 15, at 7pm. But some radical Catholics wanted us to dis-invite Fr. Martin as they were upset with one book he wrote last year (Bridging the Gap) inviting Catholics to have a compassionate approach to our LGBTQ brothers and sisters and threatened to protest. As I explained last Sunday, we have kept the same date and the speaker but the location is at the Razberry Banquet and Conference Center in Frenchtown. You are most welcome to attend and be enriched.

The "radical Catholics" had also been reaching out to Checchio in writing and on the phone, often requesting face-to-face meetings with him about Martin's then-upcoming talk.

But some radical Catholics wanted us to dis-invite Fr. Martin as they were upset with one book he wrote last year (Bridging the Gap).

Checchio either did not respond or responded with platitudes that never addressed their concerns about an LGBT activist priest speaking in their diocese or saying, "We are looking into it" ― without ever following up.

Church Militant spoke with one Catholic in the diocese who said Checchio responded once about Martin's then-upcoming talk by saying, "There is no policy in effect to prevent someone from speaking in the diocese."

Martin also spoke in the diocese of Metuchen on June 9, 2017 at Church of the Sacred Heart in South Plainfield, the same parish where a so-called married homosexual man worked as the facilitator of an LGBT group ― another controversial situation that Catholics in the diocese expressed serious alarm over to Checchio, who never responded or responded in an evasive and unmeaningful way.

Though Checchio allegedly claimed the diocese does not have a policy for preventing someone from speaking in the diocese, the talk at Sacred Heart was advertised on the diocesan website.

The event appears fives times on the diocesan website (here, here, here, here and here). The description for the event notes that Martin will be available for questions and a book signing.

Rev. James Martin SJ will speak on "The Church and LGBT Catholics" in conjunction with his new book Building a Bridge. After the presentation, Fr. Martin will be available for questions and book signings. A number of his books will be available for purchase on the day of the event. Fr. Martin is editor-at-large of America Magazine, bestselling author and consultor to the Vatican's Secretariat for Communications.

The diocese has also advertised Martin talks in the diocesan newspaper, The Catholic Spirit, for both in-person appearances and Skype lectures.

Under Checchio's leadership, the diocese of Metuchen has officially promoted Martin's controversial works and guest appearances, and Checchio is quite cozy with the outspoken LGBT activist.