No pope ever authorized missionary sisters to use contraception, even in danger of rape

Responding to a reporter's question while flying back from his recent trip to Mexico, Pope Francis made a historical reference to Bd. Pope Paul VI and his allegedly allowing missionary nuns in Africa in danger of being raped to use contraception.

His exact words were:

Paul VI, a great man, in a difficult situation in Africa, permitted nuns to use contraceptives in cases of rape. ... On the other hand, avoiding pregnancy is not an absolute evil. In certain cases, as in this one, or in the one I mentioned of Bd. Paul VI, it was clear.

Theologians agree that incidental historical facts are not a matter of papal infallibility. Cardinal Robert Sarah, head of the Congregation for Divine Worship, shed light on this point. As ChurchMilitant.com reported,

If the Pope speaks about the economy or politics, it is not his field of expertise. He can offer his vision or opinion, but it's not dogma. He can err. If he speaks about the environment, the climate, the economy, immigrants, etc., he is working from information that may be correct, or mistaken.

And indeed, serious historians (including here, here, here and here) say that the story about Bd. Pope Paul VI and the Congolese nuns is a false one.

They agree there is no paper trail substantiating such a claim of papal approval for contraception. There's no document to prove that any pope ever approved of nuns using contraceptives, whether in the Congo, Bosnia or elsewhere.

What historians do allude to is a 1961 position paper published in the journal Catholic Studies, long before Paul VI ascended to the See of Peter. The paper was written by three theologians asking the hypothetical question whether missionary sisters in danger of being of raped — like those in the Congo of Africa — could morally protect themselves with the use of douches after a rape had occurred. The authors' answer was in the affirmative.

The position paper was never publicly corrected, which led some to believe it had gained tacit approval by the Vatican. But as noted, the paper was written two years before Abp Giovanni Montini became Pope Paul VI. Pope St. John XXIII was actually the Roman Pontiff at the time, thus it goes without saying that Paul VI shouldn't be viewed as the one whose silence meant consent — a principle to which some theologians take exception.

One of the three theologians who co-authored the 1961 position paper was the late Cdl. Pietro Palazzini. In a 1993 article published in La Repubblica, Cdl. Palazzini explained the point of the paper.

"What I argued many years ago in Catholic Studies, and I repeat today," he wrote, "is that women victims of violence, whether nuns or laity, may prevent pregnancy by acting in the hours immediately after the rape, prior to new life being born." In such cases, he advocated the use of douches to eliminate the rapist's sperm from the victim's body.

In the same article, when asked about this very topic, then-Vatican spokesman Msgr. Piero Pennacchini affirmed, "The Holy See has never published any texts authorizing religious to take contraceptives, even though they run the risk of being raped."

To learn more about the disinformation behind the agenda to promote contraception, watch ChurchMilitant.com's "FBI—The Contraception Deception." 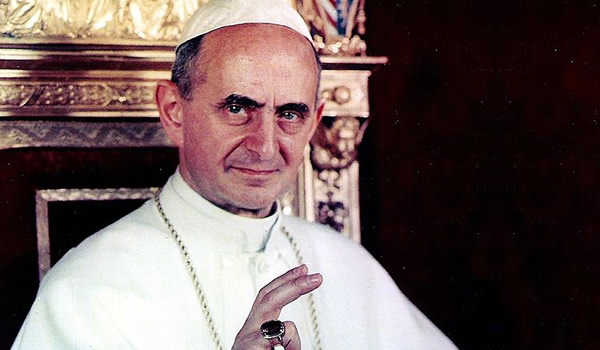 Watch
Pope Paul VI’s Message to Bishops in ‘Humanae Vitae’: Marriage Is Your Most Urgent Responsibility
By Michael Voris, S.T.B.   •   0