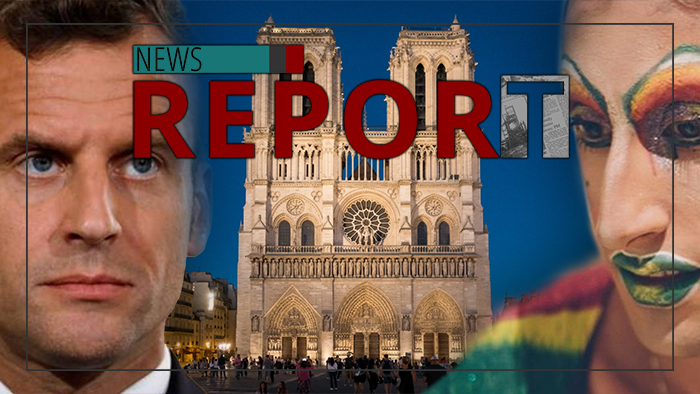 As woke culture aggressively promotes sexual perversion and gender ideology; counties, states and nations are prohibiting any attempt to heal its gender-confused victims. Church Militant's Aidan O'Connor takes a closer look at the latest attack on reparative therapy — this one coming out of France.

"The Eldest Daughter of the Church" is forsaking her heritage and is fully embracing gender ideology. The Parliament of France unanimously approved a new law Tuesday, banning so-called conversion therapy aiming to end unwanted homosexual attraction or gender confusion. Those who attempt to help victims of the LGBT agenda could face up to three years in prison and a fine equal to about $50,000.

President of France and sham Catholic Emmanuel Macron praised the new law and insisted, "Being yourself is not a crime because there is nothing to be cured." This mental pandemic is festering far beyond the borders of France.

In the United States, 24 states have bans or restrictions on reparative therapy.

Church Militant contributor and pop-culture phenomenon Milo Yiannopoulos exposed the diabolical assault against the therapy, writing, "Reparative therapy is singled out because it is rooted in Christ, because it elevates and restores the family, and because it holds people accountable for their actions."

Milo warns these restrictive laws on LGBT victims are condemning their bodies — and immortal souls. Milo has escaped the gay agenda and plans on opening a center for reparative therapy to begin healing the mounting victims of LGBT ideology.