Former Navy captain Gene Gomulka is engaged in an ongoing inquiry into homosexual subcultures at the Pontifical North American College (NAC) in Rome. Late last week, he wrote prelates and other parties connected to the seminary, warning them that because they have taken no action to investigate allegations of homosexuality at the NAC, he is issuing an "immigration advisory" to episcopal conferences of nations contributing the greatest number of students to the seminary, including Poland.

As part of his inquiry, Gomulka has included the case of former seminarian Anthony Gorgia, who was forced to leave the NAC after witnessing predatory homosexual behavior by the seminary's vice rector. Gorgia launched a GoFundMe to finance legal action against "culpable Church leaders," arguing they "will listen ... when faced with a lawsuit."

Gomulka agrees that secular legal action is the only way to make Church leaders listen, obtaining justice for Gorgia and protecting other good men at the mercy of what he calls "the problems of heterophobia and retaliatory seminary homosexual subcultures."

Discussing his latest findings and actions, Gomulka told Church Militant that supporting Gorgia's case is important since victory would set a precedent for more to come forward to fight corruption at the NAC and elsewhere.

Ultimately, this is not just about Gorgia, as the corruption "involves many people," he said. "There were many wonderful seminarians who would have made wonderful priests."

Reprinted with permission below are two letters.

Gomulka has included the case of former seminarian Anthony Gorgia, who was forced to leave the NAC after witnessing predator homosexual behavior by the seminary's vice rector.

The first letter, written to American prelates, informs them of Gomulka's investigation and current actions, maintaining his effort "to carry out this investigation with integrity and transparency."

The second letter, written to the Polish episcopal conference, informs them of what is playing out at the NAC, warning them to proceed with caution as to where they send their seminarians for priestly formation.

Letters to Prelates and Relevant Parties

I regret to inform you that my investigation into allegations of clerical misconduct at the Pontifical North American College (NAC) has revealed that the problems of heterophobia and retaliatory seminary homosexual subcultures are much broader than I had originally reported. Not only have present and past NAC seminarians spoken confidentially of how seminarians were reprised against for addressing this problem, many of them also identified gay subcultures at seminaries they attended even prior to studying in Rome (e.g., Pontifical College Josephinum, St. Joseph's in Dunwoodie, St. John's near Boston, etc.).

Insofar as neither the Vatican nor the U.S. episcopacy has taken action to investigate the allegations reported to the apostolic nuncio, Abp. Christophe Pierre; Cdl. Beniamino Stella and others, I feel it necessary to offer an "immigration advisory" to the episcopal conferences of countries that have contributed the largest number of seminarians and priests to serve in the United States in recent years.

The following translated letter, available also in its original Polish format, will provide you with an example of the warning that will be conveyed to various episcopal conferences in their respective languages. Parents of heterosexually oriented seminarians who may be assigned to study there may wish to know why their bishops never appraised them of this uninvestigated issue which Cdl. [Timothy] Dolan, the NAC Board of Governors and the current NAC administration appear to be covering up or ignoring.

In keeping with my effort to carry out this investigation with integrity and transparency, this communication will be available to the media, clergy, laity and other interested parties online at www.gomulka.net/Poland.pdf.

Poland is one country that has contributed quite a number of seminarians and priests to minister in U.S. dioceses over the past decades. I had the privilege of recruiting one of those priests, Fr. Stanisław Czernota, to be a chaplain in the United States Navy. Although he was already 55 years old when he was commissioned and could only serve until he reached the age of 62, he saw his military service to Navy and Marine Corps personnel and their families as a way of thanking the United States for adopting him and granting him citizenship.

I regret that some Poles who have immigrated to the United States have not always had positive experiences. Before being ordained a priest for the diocese of Buffalo in New York, Ryszard Biernat was assigned as a seminarian to work over the summer in a local parish with Fr. Arthur Smith. When Smith came into Biernat's bedroom one night and wanted to engage in gay sex, the young seminarian threw him out and reported the matter to Aux. Bp. Edward Grosz. Instead of disciplining the sexually abusive gay priest, Grosz told Biernat that what happened was his own fault for not having locked his bedroom door. Grosz threatened to have Biernat's Green Card for residency revoked and have him deported back to Poland, never to be ordained a priest if he ever told anyone what had happened. It was after Biernat kept quiet and was later ordained that Fr. Smith was accused of having sexually abused his own nephew. Angered at how he was coerced as a seminarian into covering up Fr. Smith's homosexual predation, Biernat later disclosed to the media how his bishop had been covering up for many sexually abusive priests.

I share this true story with you because what happened to Biernat is happening to other seminarians and priests in the United States. When former seminarian Anthony Gorgia more recently witnessed inappropriate touching and received allegations of clerical misconduct on the part of Fr. Adam Park, vice rector of the Pontifical North American College (NAC) in Rome, Gorgia was essentially offered the same option Biernat received: Be quiet about what you saw and heard and you will be ordained; tell anyone about it and you will never be a priest. Gorgia, unlike Biernat, felt in conscience he could not be quiet about the threat of predation his fellow seminarians faced, and he was coerced into discontinuing his studies for the priesthood for the archdiocese of New York. While a genuine vocation such as Gorgia's has been lost, priests accused of misconduct such as Fr. Park and clerics alleged to have covered-up misconduct such as Cdl. Timothy Dolan, the NAC Board of Governors, and Fr. Peter Harman remain in ministry.

Until the U.S. bishops correct this predation problem in seminaries and parishes, instead of covering it up as they have been doing, I fear what could happen to other Polish seminarians and priests were they to immigrate here. You might even consider the risk that your dioceses will lose authentic vocations, as happened in the archdiocese of New York, should seminarians continue to be exposed to clerical misconduct. Just as the U.S. State Department issues official warnings about traveling to certain unstable countries throughout the world, I encourage you to issue a warning about the moral dangers that currently exist in U.S. dioceses and seminaries.

After having concelebrated Mass and socialized with Cdl. Stefan Wyszyński and St. John Paul II on different occasions, I believe they would want me to issue you this warning. As of this writing, Fr. Ryszard Biernat has been suspended for revealing to the media that his bishop was covering up sex abuse, and Anthony Gorgia will be bringing suit through the civil courts after his attempts to resolve his case through ecclesiastical channels has only been met with silence.

Proud of my Polish roots and grateful that I still have cousins living in Warsaw, I pray that God will bless you through the intercession of St. John Paul II, and that He will help you find inspiration in the life of the soon-to-be-beatified Cdl. Stefan Wyszyński.

"Gene Thomas" Gomulka is a retired Navy captain/chaplain who served on active duty at Marine Corps and Navy commands for over 24 years. A Catholic priest (monsignor) ordained for the Pennsylvania Altoona-Johnstown diocese, Gomulka and Dominican, Fr. Thomas Doyle, had their ecclesiastical endorsements revoked as a result of their support for sexual abuse victims and their confrontations of Church leaders who underreported and covered up abuse. 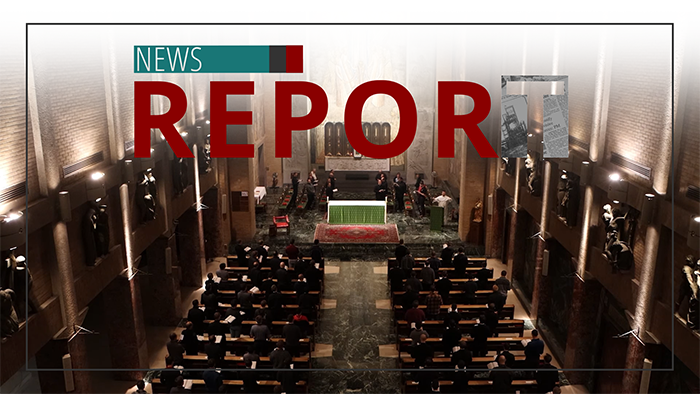