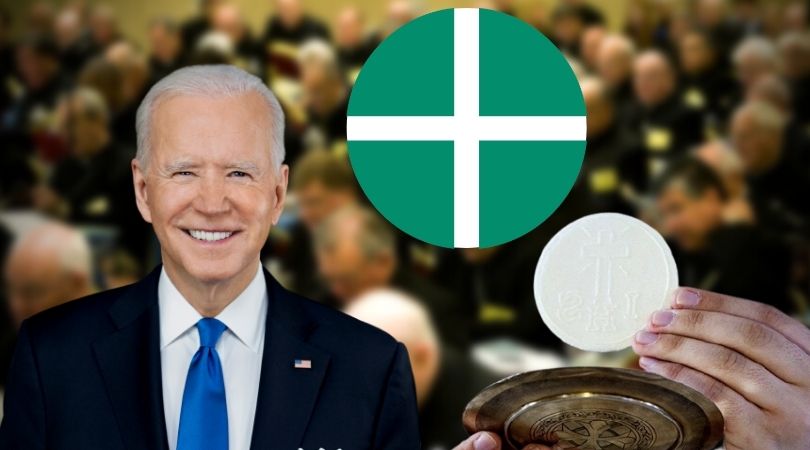 Papal pornocracy was a revolting period of Catholic Church history, but it contains an interesting story: It is the tale of John XII, the "boy pope," who was elevated to the Petrine office at the age of 18.

While saying Holy Mass, Pope John XII often did not partake of the Holy Communion which he himself confected. He refrained from taking the Eucharist out of deference to the presence of Jesus in the Blessed Sacrament.

The fact is that this particular pope was a notorious womanizer who singlehandedly transformed the Lateran basilica into a brothel. Yet at least he had the good sense and the respect for the Blessed Sacrament not to sacrilegiously communicate in a state of mortal sin. As he was in a state of grave sin most days, there were a lot of Masses said by him during his pontificate in which he did not partake of the Consecrated Species.

John XII's short reign as pontiff ended with his "defenestration" — that is to say he was thrown out of a window by a man he had cuckolded. One hopes that the pope, while making his way headfirst towards the ground, made a sincere act of contrition for his many sins. We dare hope that, perhaps, after having completed a suitable length of time in Purgatory, he is now partaking in the Beatific Vision.

But one sin that John XII was not charged with after his death was sacrilege. I suppose it could be argued that the hanky-panky he promoted in the Lateran was to some degree sacrilegious, especially if the participants in such activities were ordained clerics (and thus consecrated)! But of the long list of odious sins attributed to him, desecration of the Sacred Species via sacrilegious reception of Holy Communion was not included.

Among the modern-day prelates in the United States, such as the now-disgraced sexual predator Theodore McCarrick and others of his ilk, many have taken the desecration of the Blessed Sacrament to a level Pope John XII never dreamed of. For these men, the "who" present in the Blessed Sacrament is ignored. These false prelates, made in the image and likeness of McCarrick, ignore the presence of Christ and encourage others to follow their demonic example, both in taking Communion in sin and in encouraging others to do the same.

Don't believe that even one of McCarrick's protégés or the leftists among the prelates actually believes in Christ's Real Presence in the Sacred Bread and Wine! You can bet that, behind the scenes, the McCarrick clones (who are taking to their beds seminarians and then saying Mass), laugh at protestations of the faithful. The charlatans chuckle as they make their way to the bank with the pilfered patrimony of the Church.

It's of no importance to them whether the Church's canons for the care and respect of the Blessed Sacrament are followed.

It's not even a bother for these evil leaders to have in their Communion lines those who have never made their first Holy Communion! They are given the Blessed Sacrament, no questions asked! It's not as if God is really present! Giving out the Communion Hosts is not much different from distributing cookies. Don't worry much about those crumbs on the carpet, they'll vacuum up easily enough! What's most important when distributing "God's cookies" is to be nice and fair to everyone! Not even those in the Communion line who are not Catholic — we are told — should be "discriminated" against (even non-Christians, who believe the Holy Eucharist is nothing more than crunchy bread).

Such acts are well documented! Chicago's Cdl. Blase Cupich, at the funeral Mass for his predecessor Francis Cardinal George, allowed the Blessed Sacrament to be given to Chicago's then-mayor, Rob Emmanuel, a Jewish man (of sorts). At that same funeral Mass, he allowed the Blessed Sacrament to be received by the then-governor of Illinois, Bruce Rauner, a Lutheran. Apparently, Cupich decided early in his reign as the Windy City's archbishop to usher in the so-called "new ecumenism."

With the United States Conference of Catholic Bishops (USCCB) meeting in Baltimore, there is a lot of talk concerning the importance of a new document to be issued by the bishops. This document will supposedly address the problem of distributing the Blessed Sacrament to "Catholic pro-abortion politicians," individuals who are in grave sin, yet march up to receive the Blessed Sacrament at Communion time.

A word to the wise, don't hold your breath for any such document!

The document, if properly drawn up, should restrict individuals who, in a public manner, live and promote the sin of abortion from receiving the Blessed Sacrament. It is said it will speak to "eucharistic coherence," but, in reality, no document issued by this rheumy group of prelates can correct the disbelief of the McCarrick protégés, who already ignore the canons of the Church that protect the Sacred Species from desecration. It is unlikely they will stop their game plan of bringing down the Church to say, "Today, we begin keeping the law."

A word to the wise: Don't hold your breath for any such document. Even if the USCCB would wise up, the alpha prelates who really run the show in the United States would just ignore the result. You can readily imagine a scene where if the USCCB issues a strong document this week, Cdl. Cupich angrily rips it to shreds (as Nancy Pelosi did to Trump's 2020 State of the Union address).

But honestly, does anyone think doctrinal renegades like Cdl. Donald Wuerl, Cdl. Blase Cupich, Cdl. Timothy Dolan, Cdl. Joseph Tobin and Cdl. Wilton Gregory — men who totally ignore the ancient canons of the Church — would protect the Blessed Sacrament from being desecrated or care about any such document published by the USCCB?

As if to top off the demonic nature governing the U.S. church and our nation, we have the demented man who believes he's a duly elected President and a faithful Catholic (Mr. "Oh, I go to Mass each and every Sunday and I receive Holy Communion so devoutly! And did I mention that a woman has the right to murder her child and that gays should get married?") in charge of the government.

Even assuming Biden's sincerity in his loose interpretation of the Catholic faith, his disbelief in the true presence of Christ in the Blessed Sacrament, like the bishops', is clear.  Any Christian who can read the Bible and who had Biden's decades-long record of promoting abortion and sodomy could not believe God is present in the Blessed Sacrament and stroll nonchalantly to the Communion rail knowing that there he will be encountering his Maker.

Any Christian who can read the Bible and who had Biden's decades-long record of promoting abortion ... could not believe God is present in the Blessed Sacrament and stroll nonchalantly to the Communion rail.

To Biden's credit, Church prelates let him get away with promoting the falsehood that he's a Catholic. All it would have taken was one priest, decades ago, to say to him when he marched up for Holy Communion, "Get out of here and don't come back until you repent of your sins."  It would have done Biden good.

Alas, no Padre Pios exist in America today. Perhaps the final judgment of God will go down a little bit lighter for Biden than for the McCarrick protégés who promoted him for commander-in-chief.

The only document that would give any coherence to the incoherence of the U.S. church is a document listing the resignation of the bishops en masse. God can work miracles of conscience, after all, and such a thing might make some difference in turning the U.S. church around.

That would be the sensible and right thing to do, for they have failed at their most fundamental jobs, to secure the sacraments of the Church. Christ is present in the Blessed Sacrament. If you don't believe this, you should not be a Catholic, let alone a cardinal. 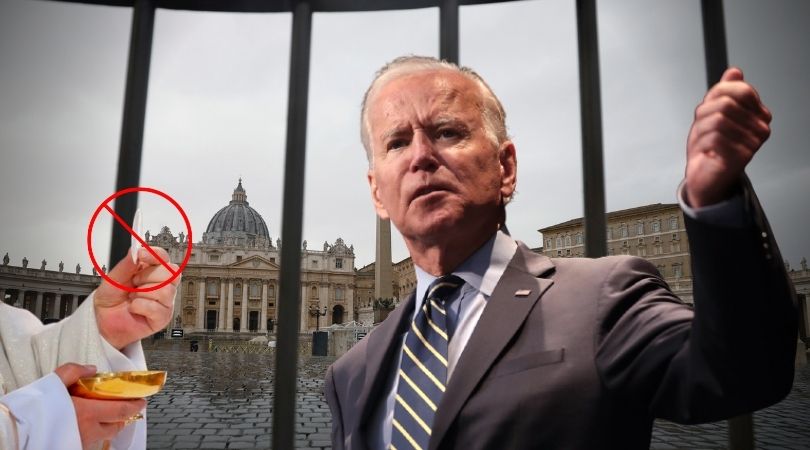