Notre Dame Out and Proud 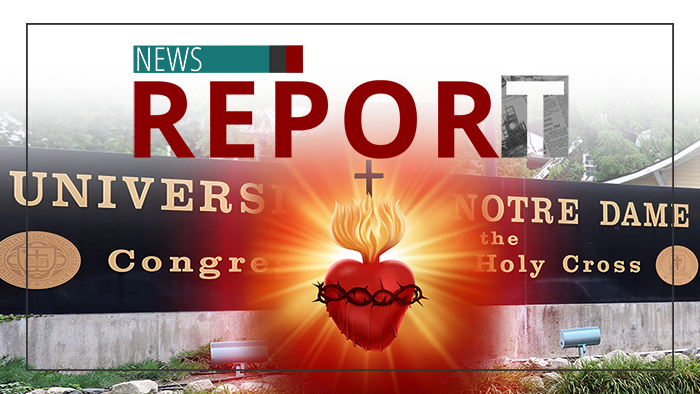 University of Notre Dame alumni are waking up to the truth. The university that aspires to be America’s premier Catholic university is fully embracing the homosexual agenda. Church Militant’s Kristine Christlieb reports on what might be the final nail in the coffin.

While faithful Catholics around the world are celebrating the Sacred Heart of Jesus during the month of June, the University of Notre Dame is celebrating gay pride.

William Dempsey, founding president of Sycamore Trust: "The voices in support of those gay rights have become obvious, more public. I think it is fair to say now that there's no restraint at all."

Dempsey, who has been monitoring Notre Dame’s commitment to its historic mission, describes a turning point around 2005, early in Fr. John Jenkins’ tenure.

Dempsey: "He authorized for the first time the organization of a club for gay students. That application had been made over two or three decades at the university and had always been turned down."

But the root of the problem lies at the feet of Fr. Edward Malloy. In 1988, he gave the green light to three women faculty members who came to him with the idea of establishing a gender studies program. That program became the launching pad for all things pro-LGBT.

To celebrate so-called gay pride, Notre Dame also is encouraging students and alumni to make a donation to the Human Rights Campaign, the largest homosexual advocacy group in the United States.