Now the Cross of Christ Calls for Valiant Acts of Witness

Judging by their response to Abp. Carlo Maria Viganò's revelations about the promotion of homosexualism among the Catholic clergy, it appears that the Vatican hierarchs have discovered virtue in the temptation to reduce the Holy Spirit and Jesus Christ to the Law. Pondering St. Paul's rebuke of legalism in his epistle to the Galatians, Pope Francis denounced this temptation in the homily he delivered at morning Mass at the casa Marta in Oct. 2016. But even though Abp. Viganò acted in the spirit of wholesome respect for the common good of the Church, to preserve it from harm, the Vatican's response is not to address the harm, but seek punishment for the "crime" of alerting the faithful to the threat.

In his homily the Pope translated St. Paul's words to the Galatians (O mindless Galatians! Who has bewitched you!) to imply that Catholics in our day, who stand steadfastly against the sins of abortion and homosexuality, act stupidly, as people bewitched by ideologies, unwilling to let Holy spirit "do great works in us." However, it is the Cdl. Blase Cupich who, in seeking to excuse the Pope's telling silence about the Viganò report, asserted that the Pope rightly gives greater priority to global warming and the promotion of a world without borders (and hence without the sovereignty of nations they delineate).

It appears that Pope Francis now pursues these secular ideological agendas (prescribed and promoted by those who specifically reject the Biblical account of God's intention for human nature) in preference to preaching the gospel of salvation through Jesus Christ.

Such responses tend to confirm the conclusion of Abp. Viganò's testimony, in which he writes:

Bishops and priests, abusing their authority, have committed horrendous crimes to the detriment of their faithful, minors, innocent victims, and young men eager to offer their lives to the Church, or by their silence have not prevented that such crimes continue to be perpetrated.

[T]he corruption has reached the very top of the Church's hierarchy … even some very close to Pope Francis, such as Cardinal Francesco Coccopalmerio and Archbishop Vincenzo Paglia, who belong to the homosexual current in favor of subverting Catholic doctrine on homosexuality … Cardinals Edwin Frederick O'Brien and Renato Raffaele Martino also belong to the same current, albeit with a different ideology. Others belonging to this current even reside at the Domus Sanctae Marthae.

Recalling St. Paul's rebuke of the Galatians, who seems more likely to be under the spell of evil ideologies: Those who practice and conspire to cover up abominable sins — identified and proscribed as such by God, Christ and the Apostles? Or those who venture all, as Christ did, to bear witness to the truth, though it brings the force of law down upon them?

Moreover, there can be no doubt that the complicity of Catholic hierarchs in the promotion of clerical homosexualism strikes a blow, intended to be fatal, against the work of Christian evangelization. Whether that evil intention is fulfilled depends on how the body of Christ responds. Will we stand firm, demanding truth; or abet un-Christlike retreat before the trendy, fake understanding of love and compassion Pope Francis and others around him now promote as "openness to the Holy Spirit?"

Whatever the intended harm, however, Christ Jesus has not abandoned the work for which He came in the flesh.

They seem bent on pleasing an increasingly anti-Christ world, though it means losing countless millions of souls to whom God sent the true Body of Christ as the way to salvation. Benjamin Wiker of Franciscan University accurately assessed what is at stake in this moment of truth in an article published in the context of Abp. Viganò's witness statement:

This is a massive, massive crisis in and for the Church because a deeply embedded worldwide homosexual network among our priests, bishops, and cardinals is actively engaged in bringing about the full de-Christianization of the world by preying on boys between 12–18, literally recreating Greco-Roman sexual culture in our seminaries and dioceses. If you want to know what it was like in the sordid sexual days of ancient Greece and Rome, just read the Pennsylvania Report.

That's a rather horrible irony, isn't it? The very men most authoritatively charged with the evangelization of all the nations are full-steam ahead bringing about the devangelization of the nations. In doing so, these priests, bishops and cardinals at the very heart of the Catholic Church are acting as willing agents of repaganization, undoing 2,000 years of Church history.

To be even more pointed, these priests, bishops and cardinals are the chief agents of devangelization, de-Christianization, repaganization. There is nothing, nothing, that undermines the moral and theological authority of the Magisterium more quickly and thoroughly than the devilish marriage of scandal and hypocrisy. It destroys the ability to evangelize.

Whatever the intended harm, however, Christ Jesus has not abandoned the work for which He came in the flesh. His true Church is called to carry out His command to carry that work forward, no matter who seeks to nail us to the cross for doing so.

This will require spoken prayer — indeed it is essential, every day. It will require heartfelt vows and promises — made and reaffirmed until by God's remaking of our common heart and salient will, they are utterly fulfilled. The cross of Christ — our sign of duty and devotion — now calls for moral deeds of penitence, revolting the Church from sin and returning the members of Christ's living body on Earth to valiant acts of witness, worthy of his sacrifice. Such acts prove the mind of Christ all-powerful within us and so commend our spirits, like his, into the hands of our Almighty God. 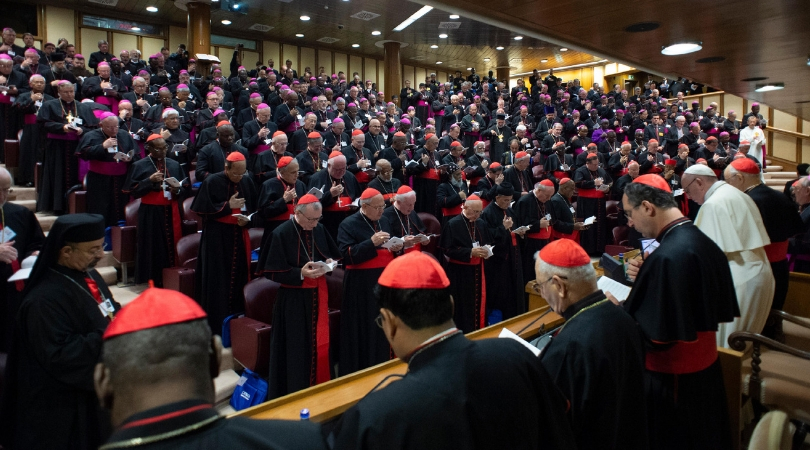 When Does Purposeful Confusion Reveal Itself to be Sly, Purposeful Deceit?
By Dr. Alan Keyes   •   0