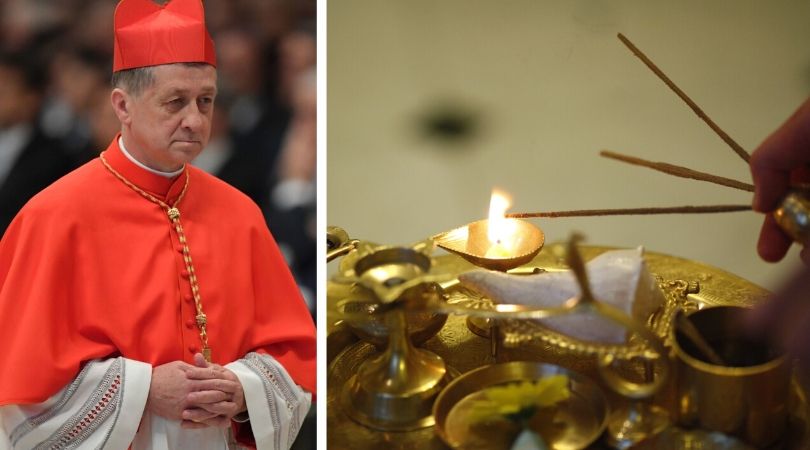 ROME (ChurchMilitant.com) - Catholics all over the world have been scandalized by nuns performing a distinctive Hindu ritual during the elevation of the Holy Eucharist at a Mass celebrated by Cdl. Blase Cupich in Rome.

The "arati" ritual is one of twelve Hindu symbols, rituals and ceremonials approved by the Vatican for the "Indian Rite Mass" and has led to widespread syncretism, liturgical abuse, confusion among the laity and a moratorium on evangelization in India.

A trio of Indian nuns, who had completed their diploma in safeguarding at the Gregorian Pontifical University's Center for Child Protection, performed the "arati" rite at the thanksgiving Mass presided over by Cdl. Cupich of Chicago on Feb. 14.

The "arati" was performed to the chant of a "bhajan" (Indian chorus) with the music of Indian instruments accompanying the singing. At least three other priests are concelebrating alongside Cupich.

In a video clip on Twitter posted approvingly by Sr. Karolin Kuhn SSND, the nuns are seen swaying rhythmically to the music, each waving a ceremonial dish containing joss sticks, flowers and oil lamps, as Cupich and his concelebrant raise the consecrated Host and chalice for the Great Doxology at the culmination of the Eucharistic Prayer.

Almost all of the couple of hundred respondents on the Twitter thread slam the ritual as Hindu, pagan, "not Catholic," an "abomination to God," "diabolically disoriented" and "idolatrous."

No priest from India was publicly willing to make a statement when contacted by Church Militant. However, speaking on condition of anonymity, a priest from North India confirmed that such practices had become "now de rigueur in almost all Indian seminaries, convents [and] religious houses of formation."

"The so-called 'Indian Rite Mass' which received Vatican approval in 1969 is vigorously promoted by the Catholic Bishops Conference of India's (CBCI) National, Biblical, Catechetical and Liturgical Center (NBCLC)," he said.

The theological vision behind the Indian Mass is significant, since it integrates the goal of religious sacrifice in Hinduism into that of Christianity.

The priest admitted that the "arati" was "an explicit Hindu symbol used exclusively by Hindus," but, he said, "bishops, theologians and other religious would mock him if he or faithful lay Catholics even dared to challenge it as inculturation, and using Hindu forms of worship was now "the 'orthodox' position in the Indian Church's hierarchy," regarded as "an authentic Indian expression of the gospel."

"Arati" is a Hindu liturgical rite in which camphor flames, flowers and joss sticks are offered to the deity by means of a clockwise rotation while standing before an idol. The five camphor lights symbolize the five elements of earth, air, fire, water and the ether, representing the totality of the cosmos in Hindu theology. The ceremonial is also used to welcome an important personality or guest, since in monistic Hinduism the whole of creation is one single principle of divinity.

Sources drew Church Militant's attention to the "arati" rite performed by Indian nuns at Strasbourg Cathedral in September 2018 for the beatification of Mother Alphonse-Marie, a French nun and founder of the Sisters of the Divine Redeemer. The Hindu ritual was again performed during the Great Doxology in the presence of dozens of clergy, with no objection or protest.

Here, the sisters are singing a "bhajan" in Tamil. The words used are steeped in Hindu theology with the refrain repeating the word "Anjali" — an offering to a deity (traditionally from the cupped palms of one's hands).

Walker's Hindu World points out that the "object of the 'arati' rite is to please the goddess with bright lights and colors and also to counteract the evil eye," he notes.

Further, French Catholic missionary and Sanskrit scholar Abbe J. A. Dubois in Hindu Manners, Customs and Ceremonies notes that "arati" is one of the "commonest religious practices of the Hindus ... performed by married women and courtesans ... to counteract the influence of the evil eye and any ill-effects arising from the jealous and spiteful looks of ill-intentioned persons."

In 1969, the Vatican permitted 12 points of adaptation for celebration of the Mass in India leading to an "Indian Rite" form of the Holy Eucharist. The "arati" is one of the rituals that was approved by the Vatican Congregation for Divine Worship.

The "Indian Rite Mass" uses the "arati" at four points in the liturgy. First, when the priest enters, he is blessed with the person performing the arati tracing three circles around him. The outer circle symbolizes the cosmos, the second circle represents the human community and the third smallest circle stands for the congregation greeting the priest.

Similarly, the priest then takes the "arati" in his hands and — facing the congregation — performs the ritual over the people in three circles.

Second, during the Liturgy of the Word, homage is paid to the Bible with a double "arati" of flowers and incense. The "Indian Rite Mass" prescribes verses from the Hindu scripture Brihadaranyaka Upanishad to be chanted while this is taking place. The chant ends with the singing of the sacred Hindu syllable "Om."

Third, at the offertory, the priest makes an "arati" with a tray of eight flowers, which in Hinduism symbolize the eight directions of the universe.

Finally, during the Doxology, there is triple "arati" of flowers, incense and fire.

Indian Catholic priest Fr. Jacob Nangelimalil acknowledges that "the theological vision behind the Indian Mass is significant, since it integrates the goal of religious sacrifice in Hinduism into that of Christianity."

Bishops and theologians promoting the wave of "inculturation" have been caught unawares by the backlash from militant Hindus as well as criticism from Catholic converts from lower-caste Hindu backgrounds.

Hindus are condemning the inculturated liturgies as devious gimmicks designed to convert Hindus to Catholicism, while low-caste Catholic converts accuse the Indian hierarchy of incorporating symbols from Brahmanical Hinduism — which kept lower castes subjugated for millennia before they were liberated by converting to Christianity.

Inculturation has also led to a redefinition of evangelization where the goal is to "make a Hindu a better Hindu" and not to bring him or her to faith in Christ and to membership in the Catholic Church. 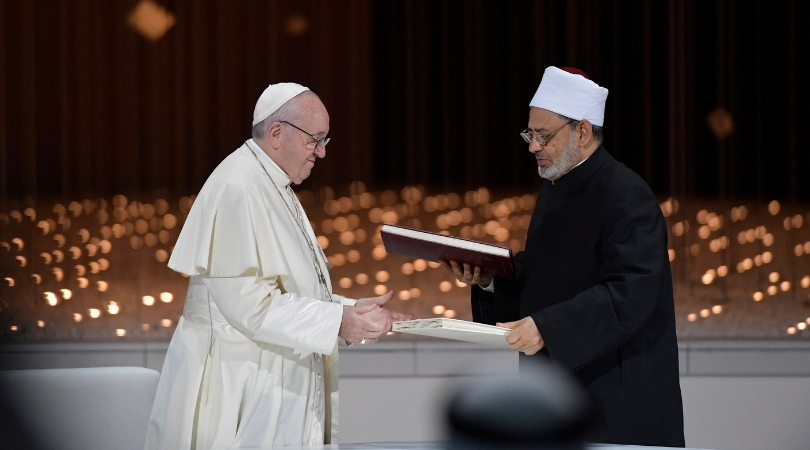