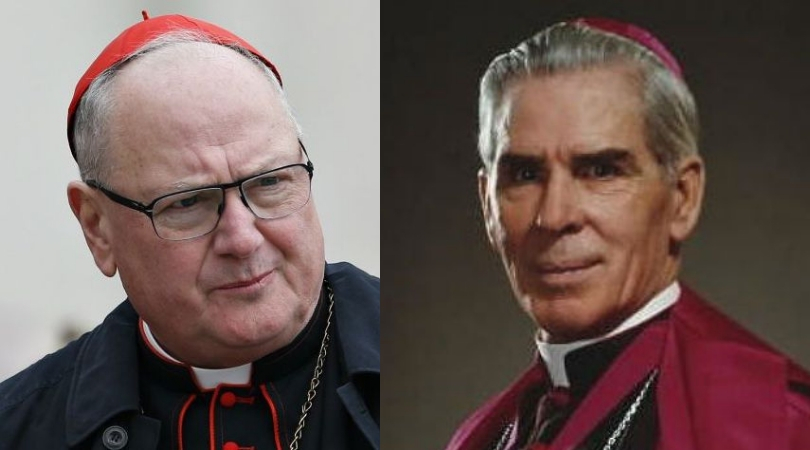 NEW YORK (ChurchMilitant.com) - The archdiocese of New York is again appealing the lawsuit over Abp. Fulton J. Sheen's remains. This makes the fourth appeal filed by Cdl. Timothy Dolan, who is spending hundreds of thousands of dollars in legal fees to litigate the case against Joan Sheen Cunningham, niece and closest living relative to Sheen, with legal rights over his body.

"They've appealed every time and lost every time," said Cunningham in comments to Church Militant. "I can't believe they're continuing this."

"We've won every time. I don't know why they just keep going," Cunningham said. "They just won't give up."

They've appealed every time and lost every time. I can't believe they're continuing this.

"We are truly sad that New York is again delaying the case, costing money and furthering litigation for what appears to be a case that's been proven to be lost on their part," Kruse told Church Militant. "We're also sad that we have to wait for the court to offer another ruling, a fixed ruling that we are confident is again going to uphold Joan Cunningham's desire to transfer the remains of Abp. Sheen."

"It is with great regret that this time-consuming and costly litigation continues," read a statement from the Peoria diocese, "which also delays the celebration of Venerable Archbishop Fulton Sheen's beatification."

On May 2, the New York Court of Appeals — the state's highest court — dismissed the archdiocese's petition, simply stating, "Appeal dismissed without costs, by the Court sua sponte, upon the ground that no substantial constitutional question is directly involved."

The archdiocese is requesting the same court to reconsider its dismissal.

The lower courts have repeatedly ruled in favor of Cunningham, who first brought her legal petition on June 14, 2016, requesting that her uncle's body, currently buried in the crypt of St. Patrick's Cathedral, be transferred to the diocese of Peoria, Illinois, where he was born, raised, went to seminary and was ordained.

The Peoria diocese has spent approximately $1 million over the past 16 years advancing Sheen's cause, and plans to build a shrine to the future saint. New York has contributed nothing by way of finances or other resources.

"New York has never given anything to the cause," Cunningham told Church Militant. "Well, they've got these very fancy lawyers that cost them an awful lot of money, and I know I wouldn't give anything to the archdiocese anymore."

Hundreds of Thousands in Legal Fees

The lead attorney on the Sheen case, John Callagy, served as Kelley, Drye and Warren's first chairman, a position he held for 20 years, and is a recipient of the New York archdiocese's "Saint Thomas More Award."

According to court filings, four attorneys from the firm are representing the New York archdiocese in the Sheen case, although an eyewitness present at a court hearing last fall counted eight attorneys total for the archdiocese.

It's difficult to estimate the exact amount the New York archdiocese has paid in legal fees, but considering the case has been litigated continuously since June 2016, the amount is well into the hundreds of thousands.

Critics have slammed the archdiocese for shuttering parishes and schools, claiming low attendance and decreased finances — all while spending hundreds of thousands of archdiocesan dollars financing costly litigation, and delaying the cause for Sheen's canonization.

Additionally, the New York archdiocese has recently suffered bad optics after it was revealed Dolan spends time in a vacation home worth $3.5 million, nestled in the woods of Sloatsburg, New York.

'I'd think he'd be ashamed,' Cunningham told Church Militant, referring to Cdl. Dolan. 'I'd be embarrassed. But he's not.'

"I'd think he'd be ashamed," Cunningham told Church Militant, referring to Cdl. Dolan's repeated appeals in the Sheen case. "I'd be embarrassed. But he's not."

The press release from the Peoria diocese follows: 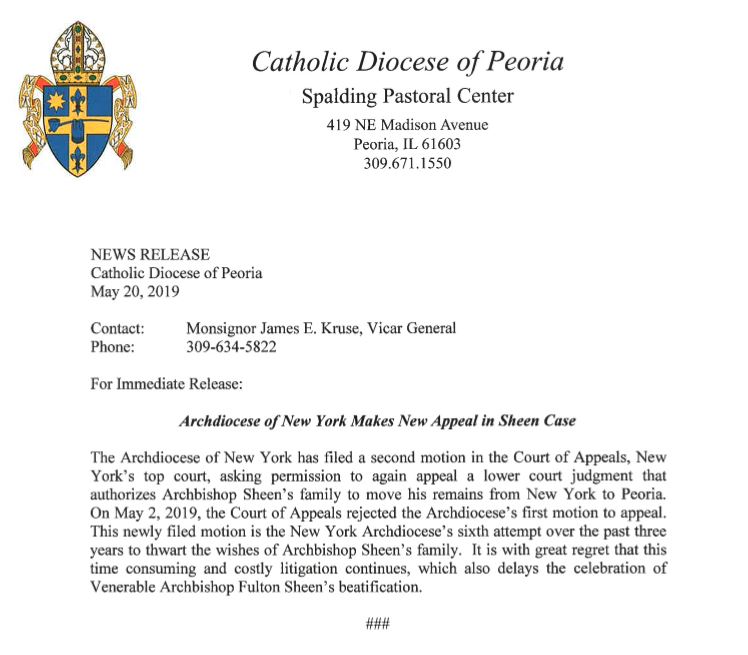