On Thursday, the state high court denied the archdiocese's motion to appeal: "Motion for leave to appeal denied with one hundred dollars costs and necessary reproduction disbursements."

With this final ruling, the archdiocese has exhaused all available appeals in the New York court system.

"Bishop Jenky is overjoyed and elated that for the fifth time, the New York courts have upheld Joan Sheen Cunningham's petition," read a statement from the diocese of Peoria, Illinois.

Steve Cohen, attorney for Cunningham, told Church Militant, "The Court of Appeals did the right thing. Finally, Abp. Sheen has the opportunity to continue what was his life's work for, hopefully, eternity."

Finally, Abp. Sheen has the opportunity to continue what was his life's work for, hopefully, eternity.

The archdiocese has fought for three years against Joan Sheen Cunningham's request to move her uncle's body to Peoria, Illinois — the city where he was born, raised, went to seminary and was ordained.

It's also the diocese that has spent approximately $1 million dollars over the last 16 years advancing Sheen's cause for sainthood, relying on past promises of the New York archdiocese to hand over the archbishop's body.

Cardinal Dolan reneged on those promises in 2016, forcing Cunningham — Sheen's closest living relative, with legal rights over his body — to take him to court.

Dolan has fought her at every turn, appealing each court order ruling in Cunningham's favor — and losing each time.

"We've won every time. I don't know why they just keep going," Cunningham told Church Militant in May after learning of the archdiocese's latest appeal. "They just won't give up."

"I'd think he'd be ashamed," Cunningham added, referring to Cdl. Dolan's repeated appeals. "I'd be embarrassed. But he's not."

Next steps will be to disinter Sheen's body, currently resting in the crypt of St. Patrick's Cathedral, and transfer his remains to Peoria, where the diocese can resume plans for his beatification ceremony, held up for three years owing to litigation.

"We will make arrangements to get the permits that are necessary to have the remains moved," Cohn told Church Militant. "We will make the application next week for the permit and then it's really up to the city of New York as to how quickly they can grant them and how St. Patrick's and the funeral home that will actually be doing the move can make their plans to have the remains transported."

The trustees of St. Patrick's Cathedral have promised their full cooperation.

The diocese of Peoria thanked a number of people for the success of the case.

"We are especially grateful to Joan Sheen Cunningham's perseverance, and also for the legal skill of the Cohen Law Office," Kruse said. "But even more, we are grateful for the efforts of our chancellor, Patricia Gibson, who has been championing this legal action and cause from the beginning."

"We are truly grateful to hear initial accounts of the archdiocese of New York's willingness to cooperate on the transfer of the remains of Ven. Abp. Fulton Sheen," he added.

New York has never given anything to the cause.

The lead attorney on the Sheen case, John Callagy, served as Kelley, Drye and Warren's first chairman, a position he held for 20 years. 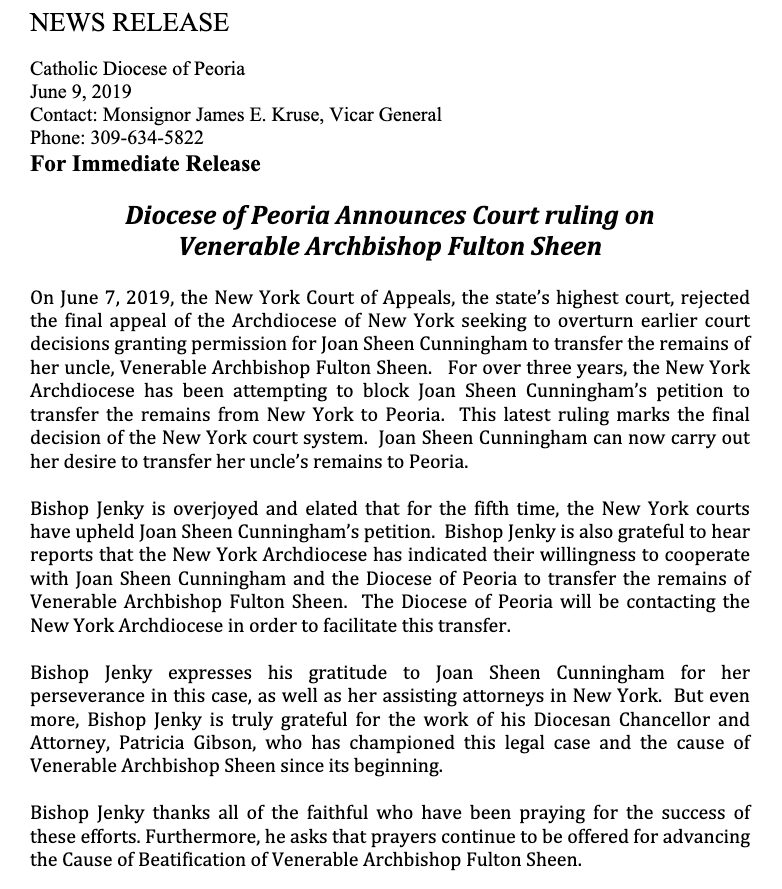 6/9/2019: This article was updated to include the diocese of Peoria's press release, issue Sunday.
Watch the panel discuss the final defeat of the archdiocese of New York in The Download—Sheen Saga Ends.