Brought to You by Walmart 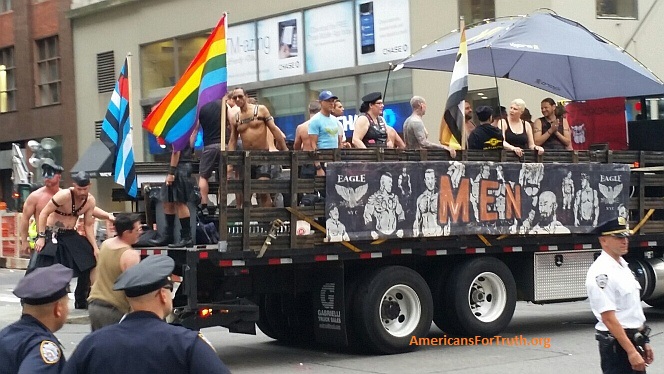 New York City's annual homosexual "Pride" parade — sponsored Sunday (June 28, 2015) for the first time at the highest "Platinum" level by Walmart Corporation — featured nudity, lewdness, vulgarity and even a sadomasochism float — subjecting the many young children who either marched in or viewed the parade to behaviors and messages that are highly inappropriate for their age and emotional immaturity. [See photos below.]

This AFTAH writer observed most of the parade, which was dominated by major corporate sponsors. One of the bases for the Supreme Court's stunningly radical June 26 ruling creating a "constitutional right" for homosexual "marriage" is that it "safeguards children and families." But in truth homosexual parenting harms kids in a variety of ways. It was precisely homosexual (and pro-"gay") parents who brought impressionable children to observe this highly-sexualized parade glorifying immorality and gender confusion. This is just one example, but a very troubling one, of how "gay parenting" harms children.

I asked a woman who was hostile to me being there about the propriety of exposing kids to lewd behaviors and vulgarity. She said she didn't agree with everything that goes on at the "pride" parade but that nobody was forcing people to attend it. However, that right to choose does not extend to minor children, who are taken to such bawdy events by their parents and subjected to the perverseness and homo-eroticism that naturally flow from a parade celebrating deviant sex and gender. One such child was a girl standing next to me who appeared to be about 10 or 11; she was evidently dropped off by her father (I saw a man check on her once), who left her alone for hours to view the "pride" parade. 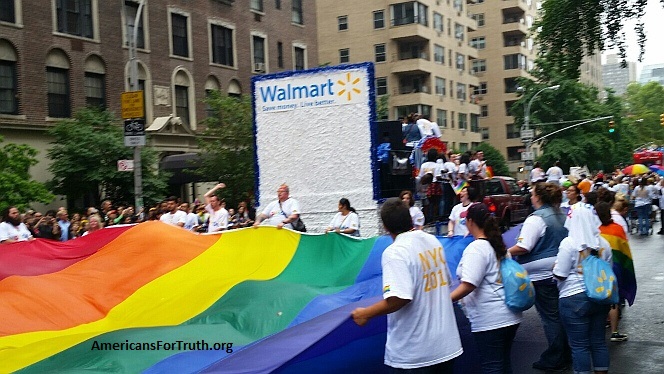 "Gay" Bully Exercises Special Rights
At one point half-way through the parade, as I stood near the corner of Fifth Avenue and 10th Street (near the homosexual “pride”-celebrating Church of the Ascension), two homosexual activists, a man and a woman, started verbally challenging me, escalating to outright harassment. They had figured out that I was not a homosexual enthusiast and were upset that a moral critic was taking photos at "their" parade, even though it was a very public event.

When they finally confronted me directly, I protested that I had a right to be there and that this is still a free country (for the most part). The man, easily the more belligerent of the two, responded angrily: "Not for you; you're anti-gay." He repeated this absurdity several times, and then started obnoxiously reaching from behind me to block my camera lens with his hands, to keep me from chronicling the parade. Evidently, homosexual activists are not really *proud* of all that goes on at their sin celebrations.

Next, the man moved up to the rope line and pushed me out of my spot, where I had been standing for at least two hours. I told them I was there first but chose not to push back and fight for my spot as this budding "homo-fascist" was trying to make a spectacle of me in front of all the "gay" revelers; so I moved on to another spot along the parade route where I was able to take photos at a better angle.

1) Had I engaged in the same thuggish behavior toward this homosexual activist — especially physically harassing him — he might have started screaming that I had "assaulted" him or cried "hate crime!" Lest you think I exaggerate, this happened to me once in Chicago several years ago: A young homosexual activist grabbed my protest sign out of my hands and ripped it up to rev up the "gay" crowd; when I confronted him, I made the mistake of touching him with my finger, whereupon he started yelling and screaming that I had touched him! Such are the glaring hypocrisy and tactics of intolerant homosexual activists. (The woman at New York "Pride," while carping that I was a "waste of space" because I dared to observe "pride," at least did not get physical with me.)

2) Homosexual activists are already crusading to take away people's right to act upon their disagreement with homosexuality — e.g., the Southern Poverty Law Center's successful lawsuit against "ex-gay" therapy group JONAH, and the legislative efforts to ban pro-heterosexual change therapy for minors. In their arrogance following the Supreme Court's discovery of a "constitutional right" for homosexuality-based "marriage," how many homosexual activists will start behaving as if their opponents lack the basic American right to act upon their moral opposition to sin-based "marriage"? 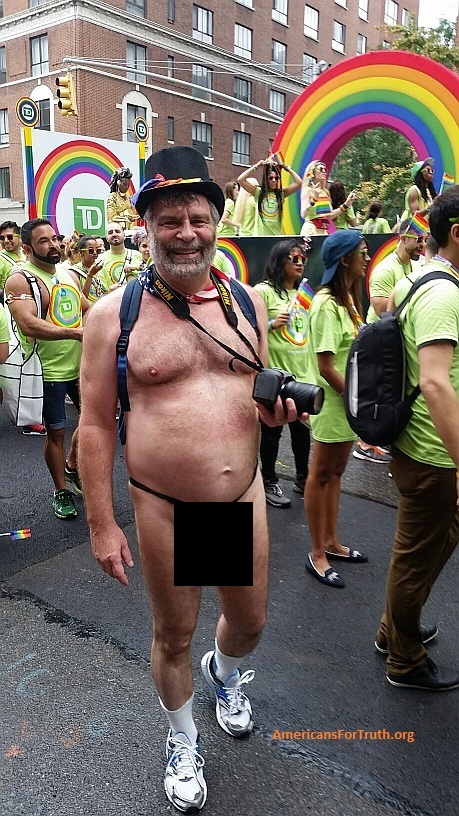 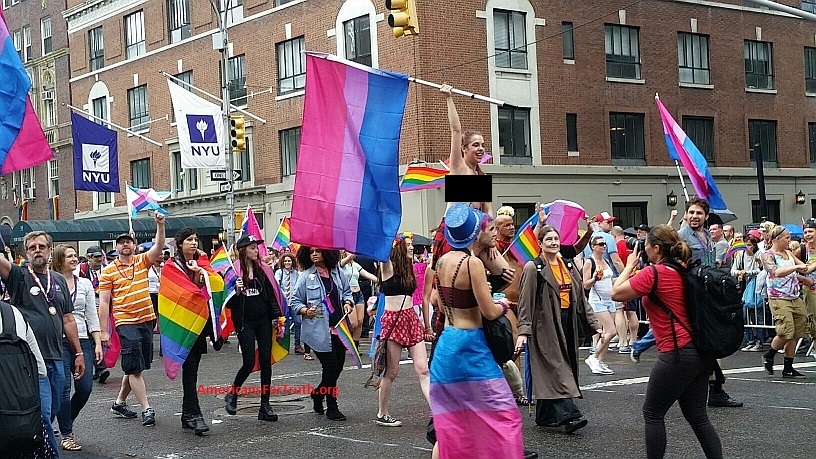 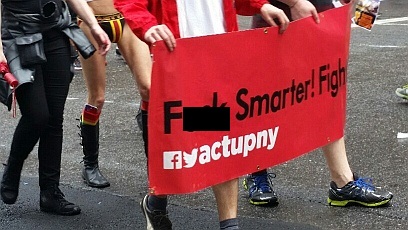 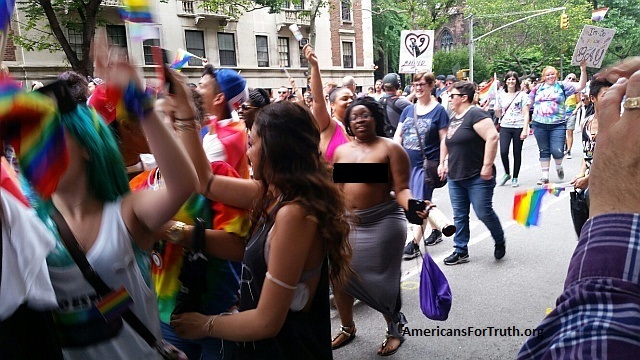 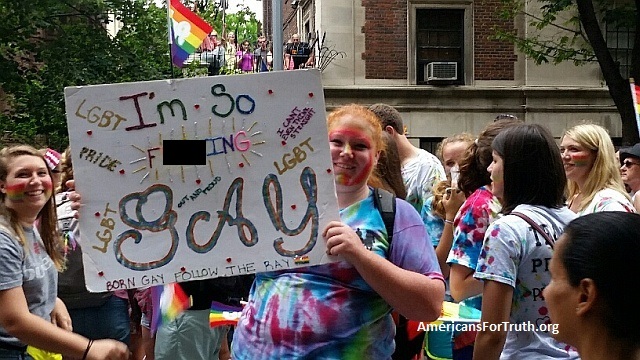 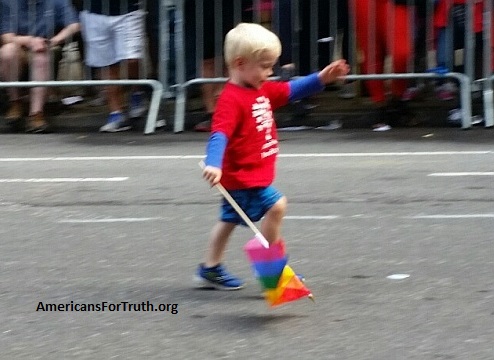 Read the rest at Americans for Truth About Homosexuality.