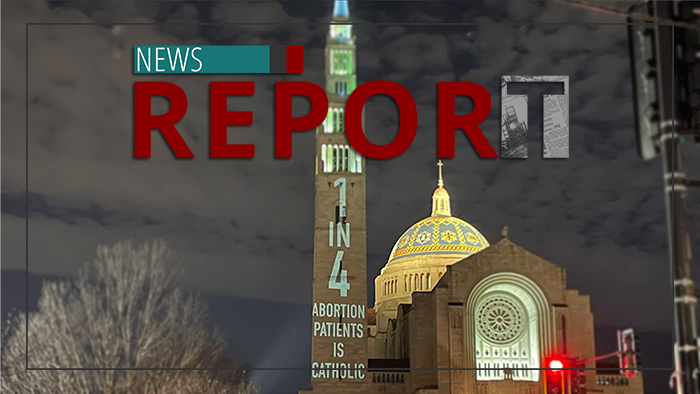 New York pro-lifers were harassed at New York's St. Patrick Cathedral on Saturday when they gathered for the archdiocese of New York's Prayer Vigil for Life. Church Militant's Hunter Bradford tells us about the pro-abortion badgering over the weekend.

Abortion activists with New York City for Abortion Rights made noises and shouted profanities at people simply praying for an end to abortion on the 49th anniversary of Roe v. Wade. The organization has a history of harassing New York's pro-lifers.

Meanwhile, in Washington, D.C., Catholics for Choice projected pro-abortion slogans onto the National Shrine of the Immaculate Conception, outraging Catholic pro-lifers who gathered that day in the basilica.

Even Washington's pro-sodomy archbishop, Cdl. Wilton Gregory, responded: "The true voice of the Church was only to be found within the basilica. ... Those whose antics projected words on the outside of the church building demonstrated, by those pranks, that they really are external to the Church."

Bad Catholic Joe Biden, a lifelong abortion advocate who has received no censure from American bishops, issued a statement Saturday declaring his administration "is committed to codifying Roe v. Wade." The statement added, "In the past four years, reproductive health, including the right to choose, has been under relentless and extreme attack."

When President Trump was in office, he filled federal court seats, including those of the Supreme Court, with pro-life judges and did more than any other U.S. president to roll back abortion laws.

After the appointment of Supreme Court justices Neil Gorsuch, Brett Kavanaugh and Amy Coney Barrett, both pro-life and pro-abortion activists realized the end of Roe v. Wade may be near.

American bishops have done almost nothing to protect unborn babies these last 49 years. In a 2012 interview, New York's archbishop, Cdl. Timothy Dolan, disclosed that bishops "have gotten gun shy ... in speaking with any amount of cogency on chastity and sexual morality."